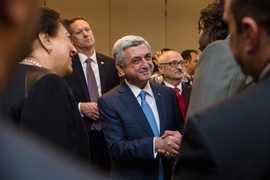 ↓ Download Image
Caption: “In the 155 years of its existence, this Institute has not only withstood and adapted to, but also become a leader of constant progress and change,” said Armenian President Serzh A. Sargsyan (pictured).
Credits: Photo: Casey Atkins 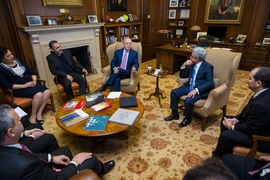 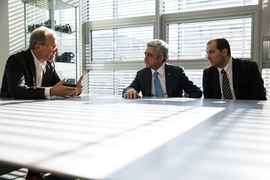 Caption:
“In the 155 years of its existence, this Institute has not only withstood and adapted to, but also become a leader of constant progress and change,” said Armenian President Serzh A. Sargsyan (pictured).
Credits:
Photo: Casey Atkins

President of Armenia Serzh A. Sargsyan made an innovation-centered visit to MIT on Tuesday, meeting Institute leaders and viewing demonstrations of new technologies at the MIT Media Lab.

The visit began with a meeting between Sargsyan and MIT President L. Rafael Reif, who noted the contributions Armenian scholars had made at MIT and expressed the Institute’s interest in continued collaboration with Armenia.

Sargsyan also toured the Media Lab, where researchers work on a diverse range of experimental technologies; his visit there included an introductory discussion with Media Lab co-founder Nicholas Negroponte.

“If you want to do something impossible, come here,” Negroponte said, summarizing the lab’s philosophy.

Sargsyan also gave an evening talk in MIT’s Samberg Conference Center, at an event hosted by the Luys Foundation, which funds scholarships for Armenian students, and the Noubar and Anna Afeyan Foundation, a philanthropic organization based in Massachusetts. Noubar Afeyan, a senior lecturer at the Martin Trust Center for MIT Entrepreneurship, is a prominent executive and investor in the biomedical sector.

“With a wealth of teaching tradition, innovative ideas, and achievements, your Institute has made an essential contribution to the development of humanity,” said Sargsyan at the event, in remarks released by the Armenian government.

Sargsyan added: “In the 155 years of its existence, this Institute has not only withstood and adapted to but also become a leader of constant progress and change.”

In their sit-down discussion, Sargsyan and Negroponte discussed a variety of topics, including the value of having a broad portfolio of research projects.

“Even if something fails, the activity that goes on is still so important to everybody,” Negroponte said, emphasizing that people can still become better researchers even when working on projects that are not fully commercialized.

Negroponte also outlined the Media Lab’s relationships with corporate backers, who help fund many projects while giving lab researchers free rein to do their work.

During the conversation, Sargsyan inquired specifically how companies find out about the potential usefulness of the technologies that are being developed at the Media Lab. Negroponte responded that firms should send representatives to immerse themselves in the work being done at the lab.

The best way for those executives to “extract value” from the place, Negroponte emphasized, was to “be like a student … and integrate themselves into a lab.”

Thinking a move ahead

Sargsyan was also shown demonstrations of projects from multiple Media Lab research groups, including the Tangible Media group, directed by Hiroshi Ishii; the Lifelong Kindergarten group, directed by Mitchel Resnick; and the Responsive Environments group, directed by Joseph Paradiso. He was also given a tour of the Fab Lab on the ground floor of the Media Lab, by Sherry Lassiter, program manager for MIT’s Center for Bits and Atoms.

Resnick gave Sargsyan a demonstration of the ways students can learn some basic elements of computer programming and even translated into Armenian a recipe that children had created.

In conversation with Resnick, Sargsyan acknowledged that he had never done any programming — although, as a highly knowledgeable chess aficionado, he is used to the concept of thinking about sequences of logical decisions.