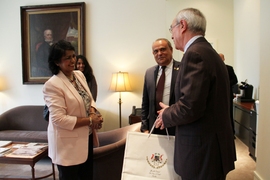 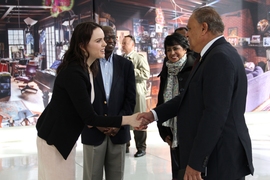 ↓ Download Image
Caption: Julia Reynolds-Cuellar, managing director for the MIT-Africa Initiative (left), greets Sooroojdev Phokeer, the Mauritius ambassador to the U.S. (right), on April 7. In the background are Julius Akinyemi, director of the MIT-Africa Initiative (center-left), and the president of Mauritius, Ameenah Gurib-Fakim (center-right).

The President of the Republic of Mauritius, Ameenah Gurib-Fakim — a trained scientist and a leader in encouraging innovation in Africa — on Friday visited MIT, where she discussed new ways to strengthen ties between her country and the Institute.

In the course of her visit, Gurib-Fakim had sit-down meetings with faculty from several MIT schools and initiatives, and took a tour of the MIT Media Lab, among other activities.

“I’ve come to a place where science fiction becomes reality,” she told MIT President L. Rafael Reif during a meeting in his office on Friday afternoon.

In response, Reif quipped: “Can I use that?” He added that it was “quite an honor to have you here.”

As president of Mauritius since 2015, Gurib-Fakim has added the expansion of her country’s scientific and technological capacity to her portfolio of activities, while continuing to work on pan-African innovation initiatives.

“A scientist doing what you’re doing is admirable,” Reif said.

Mauritius, an island state over 1,000 miles off the east coast of Africa, has a multiethnic democracy modeled on the British parliamentary system. As a country that is fairly small — about 1.3 million people — and relatively isolated in geographic terms, it is looking to build further intellectual and technological collaborations with partners abroad.

Examining the best ways of forming such collaborations was a central focus of Gurib-Fakim’s talks with faculty. For instance, with Chappell Lawson — a professor of political science who also directs the MIT International Science and Technology Initiatives (MISTI) program — she discussed MISTI’s Global Seed Funds grant program, which creates research partnerships among faculty internationally.

“We really want the faculty deeply engaged,” said Lawson, explaining that a MISTI research partnership typically starts at a small scale and grows as additional research questions are identified.

“We believe it’s been successful because it’s so grass-roots-oriented,” Lawson added.

“Because it involves students, you’re starting a pipeline for future research,” Lawson said.

Julius Akinyemi, entrepreneur-in-residence at the MIT Media Lab, emphasized this point in his remarks as well.

“Once we have a program like that started, it builds connectivity,” Akinyemi said.

As Gurib-Fakim outlined, long-term trends in Mauritius suggest it will be important for the country to generate electricity from a wider array of sources, including solar, wind, geothermal, and even wave power — the latter being a seemingly natural area of exploration for the country.

“It is good to have these possibilities exist,” said Gurib-Fakim. “Because there is growing demand, that is why we’re trying to diversify.”

During her visit Gurib-Fakim also held a joint discussion with Peter Hirst, associate dean for executive education at MIT Sloan, and Michel DeGraff, professor of linguistics and director of the MIT-Haiti Initiative. They talked about possible collaborations with both MIT Sloan and the MIT-Haiti Initiative. Gurib-Fakim and DeGraff even conversed in their native Creole languages, which are derived from French. DeGraff has championed the use of Haitian Creole in STEM education in Haiti, and discussed with Gurib-Fakim the potential application of new learning tools that could be applied to education in Mauritius as well.

Mauritius’ Ambassador to the U.S., Sooroojdev Phokeer, also accompanied Gurib-Fakim on the visit.

Gurib-Fakim spent much of her career in academia. She is a trained chemist who received her primary and secondary schooling in Mauritius, earned her undergraduate degree from the University of Surrey in the U.K., and received her doctorate from Exeter University in the U.K. She has published many academic papers on multiple topics, including the chemical composition and potential biomedical applications of plants native to Mauritius.

Further studying Mauritius’ biodiversity was a specific topic Gurib-Fakim discussed with Hazel Sive, a professor of biology at MIT and faculty director for MIT-AFRICA Initiative. In the course of pursuing further research, Sive noted, larger ties among countries can be strengthened in productive ways as well.

“I think university-to-university collaborations are the greatest diplomatic programs we have,” Sive said.