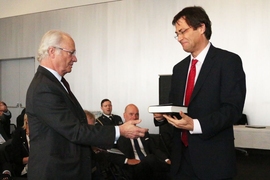 ↓ Download Image
Caption: His Majesty King Carl XVI Gustaf of Sweden, left, meets MIT professor of physics Max Tegmark, right, during the king’s visit to MIT on Friday, May 5. The Stockholm-born Tegmark conducted an exchange of gifts with the Swedish delegation, which included multiple books by MIT faculty and about MIT.

Caption:
His Majesty King Carl XVI Gustaf of Sweden, left, meets MIT professor of physics Max Tegmark, right, during the king’s visit to MIT on Friday, May 5. The Stockholm-born Tegmark conducted an exchange of gifts with the Swedish delegation, which included multiple books by MIT faculty and about MIT.

His Majesty King Carl XVI Gustaf of Sweden visited MIT on Friday as part of a “Royal Technology Mission” for his country, attending presentations about research and the Institute’s innovation ecosystem, among other topics.

The king toured the MIT Media Lab and listened to talks from MIT faculty focused on innovation, entrepreneurship, and artificial intelligence. He was accompanied by a delegation of government officials, scholars, and business leaders making a week-long visit to the U.S. to examine issues in technology and science.

“We’re deeply honored you have chosen to visit our Institute,” said Richard K. Lester, who as associate provost oversees MIT’s international activities, while also serving as the Japan Steel Industry Professor of Nuclear Science and Engineering.

“Thank you very much for making it possible to visit with you,” said Leif Johansson, chair of the Royal Swedish Academy of Engineering Sciences, who served as the formal chair of the Swedish delegation.

“We certainly have learned a lot more, and you have deepened our insight,” Johnasson added.

Not the first meeting with MIT faculty

It was His Majesty King Carl XVI Gustaf’s first visit to MIT — although, as Lester pointed out, not the first time any MIT faculty members have met him, since the king annually presents Nobel Prize winners with their medals. There are 10 current MIT faculty who have won a Nobel prize and 87 MIT-linked Nobel winners all told, including Institute alumni.

At the Media Lab, the Swedish delegation received tours of the Changing Places Resarch Group, which focuses on urban planning and mobility, and the Lifelong Kindergarten Research Group, which develops online tools for education and play.

Kent Larson, who directs the Changing Places group, showed the delegation a project called terMITe that uses sensors to study how people use their homes. The project, he noted, can help Media Lab partners such as (Sweden-based) IKEA “help design better places” for people to live.

“It is about transforming what kids see as possible for them,” Rosenbaum explained.

In a subsequent series of faculty presentations in the Media Lab’s conference space, Vladimir Bulovic, the Fariborz Maseeh (1990) Professor of Emerging Technology and associate dean for innovation, discussed the programs and courses at MIT that help fuel entrepreneurship.

“We should give you experiences while you’re at MIT to help you learn what it is to start a business,” Bulovic said.

As Bulovic noted, the greater Boston area is an ideal place to be creating synergies between academia and entrepreneurs, since roughly 10 percent of all venture capital in the world is invested within the region. And, he added, a “key to all of it is innovation brought about by universities.”

The Swedish delegation also heard a talk from Andrew McAfee, co-director of the MIT Initiative on the Digital Economy within the MIT Sloan School of Management, who discussed the new progress artificial intelligence has made within the last half-decade, and outlined some of the possible effects it might have.

“I think we’re going to make a lot of progress on tough, tough challenges in the 21st century,” MacAfee said.

However, he added, the development of artificial intelligence, to the extent that it might replace jobs, could create “tensions” in society that will need to be addressed.

Max Tegmark, a professor of physics at MIT who was born in Stockholm, moderated the discussions, gave an introduction in Swedish to the delegation, and provided a few remarks of his own about artificial intelligence.

“We don’t want to make any mistakes,” Tegmark said. “We want to get it right.” Tegmark’s concerns stem from the idea, he added, that “We want to be proactive, not reactive,” about the impact of technology on society.

Tegmark also conducted an exchange of gifts with the Swedish delegation, which included multiple books by MIT faculty and about MIT. With the event occurring on Tegmark’s 50th birthday, the entire group of visitors sang him “Happy Birthday” in Swedish.

Each professor also fielded questions from the Swedish delegation. Bulovic, when asked about the distinctiveness of MIT’s academic culture, noted that the physical connections between buildings on campus both enhance and symbolize the open-ended, interdisciplinary nature of Institute research.

Bulovic noted that his own lab, which focuses on nanoscale materials, funds about 15 students directly but serves as a locus of research for about 55 others whose work relates to his group’s efforts. “I’ll only be useful to them if I give them” opportunities and support, he said, reaffirming his commitment to research and learning from the ground up.