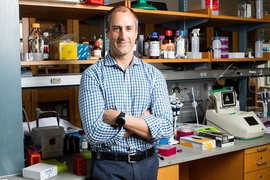 The founding mission of MIT may seem like an unusual meal-time story for a child. But when Mark Bathe was growing up, it was a regular topic of conversation around the dinner table.

That is because Bathe’s father, mechanical engineer Klaus-Jürgen Bathe, was a long-standing, proud MIT faculty member, and regularly talked about MIT founder William Barton Rogers’ mission for the Institute.

Bathe’s father was a huge presence in his childhood, and his enthusiastic descriptions of MIT’s focus on fundamental yet hands-on science to benefit society made quite an impression on him. “My father was the lens through which I saw the world,” Bathe says.

So when Bathe was admitted to both MIT and another university as a senior in high school, there was little doubt in his mind as to where he would be enrolling.

Bathe joined MIT’s Department of Mechanical Engineering as an undergraduate, where he considers himself fortunate to have been trained in a broad and fundamental, yet problem-oriented, manner.

But with a longstanding desire to impact human health through medicine, Bathe moved on to graduate research in biomechanical engineering, in part under the stewardship of Alan Grodzinsky, a professor of biological, mechanical, and electrical engineering, and director of the MIT Center for Biomedical Engineering.

After receiving his PhD in 2004, Bathe decided to deepen his understanding of biomolecules by moving to the University of Munich in 2006, to carry out postdoctoral research in biological physics.

He then returned to MIT in 2009, joining the Department of Biological Engineering, where he established an interdisciplinary research group focused on using approaches from engineering, chemistry, physics, and computer science to understand and solve problems in applied biology.

“I find the new emerging world of personalized medicine fascinating,” Bathe says. “In particular, the prospect of using gene-editing tools to correct disease-causing mutations that are either inherited or acquired, as well as the use of messenger RNAs to express specific proteins that are needed to alleviate disease.”

Bathe, now an associate professor of biological engineering at MIT, creates a huge variety of programmed three-dimensional shapes out of single strands of synthetic DNA, a process known as DNA origami. These nanoparticles may ultimately be deployed as structural scaffolds to deliver vaccines, drugs, or even gene-editing tools such as CRISPR-Cas9 to specific parts of the body, he says.

Once delivered, the therapeutic payload could be released to edit the faulty genes that cause certain diseases.

“It amazes me that with two therapeutic tools, namely CRISPR for gene editing and therapeutic messenger RNAs for protein production, we could, in principle, cure nearly any disease, potentially with minimal side-effects, but only if we can figure out how to successfully deliver these tools to act highly specifically in the target cells of interest, such as the gut, lungs, brain, or other organs,” he says.

Tackling this problem can only be achieved through an interdisciplinary, long-term research effort, he believes.

“Targeted therapeutic delivery is a highly interdisciplinary problem, involving everything from very applied, clinical medicine to basic macromolecular chemistry of nucleic acids and proteins, as well as the physics and engineering of macromolecular transport,” Bathe says.

As a starting point, his laboratory, which includes engineers, chemists, computer scientists, and physicists, developed DAEDALUS (DNA Origami Sequence Design Algorithm for User-defined Structures), an algorithm designed to automate the process of assembling DNA nanoparticles. DAEDALUS, which takes a simple 3-D representation of the object and determines how this should be assembled from the DNA strands, can build any type of enclosed 3-D shape.

As a result, the algorithm, combined with new nucleic acid synthesis procedures, which were published in a paper in the journal Science last year, are allowing Bathe and his team to build the nanoparticles far more quickly and easily than was previously possible.

Despite decades of research into the delivery of nucleic acids and proteins, and the considerable potential for these therapeutics in clinical medicine, little progress has been made as measured by FDA-approved therapies, according to Bathe. This is likely due in part to our poor understanding of macromolecular transport in the complex human anatomy, but also due to the lack of techniques available to engineer delivery tools, he says.

“We’re hopeful that fully synthetic, viral-like nucleic acid nanoparticles developed in our lab offer a new opportunity for the rational engineering of delivery tools for gene-centric therapies,” he explains.

Working with the Stanley Center for Psychiatric Research, Bathe and his team are also investigating novel methods of imaging patient-derived neuronal cells, in a bid to better understand how genes affect the signals sent between individual neurons in the brain.

He is also investigating the use of DNA and other molecules to store and process information, with density that is orders of magnitude higher than conventional silicon-based computing hardware.

When not in the classroom or his laboratory, Bathe takes part in a range of outdoor activities, including cycling, running, skiing, and hiking, as well as indoor swimming with MIT’s Master’s Swim Team. He also greatly enjoys an occasional sprint triathlon on summer weekends.

“My favorite weekend in the Boston area, however, is a ferry ride down to Martha’s Vineyard for a bike ride around the island, ending with a swim and lobster roll by the seaside in Edgartown,” he says. “I can’t recommend it highly enough!”