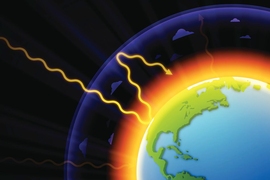 ↓ Download Image
Caption: “There’s no question that carbon dioxide is the biggest contributor to human-caused climate change, so that’s the big focus of mitigation efforts. But there are a number of others that are also significant,” says Jessika Trancik, the Atlantic Richfield Career Development Associate Professor in Energy Studies at MIT’s Institute for Data, Systems, and Society. 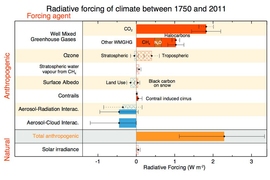 ↓ Download Image
Caption: This chart from the Intergovernmental Panel on Climate Change (IPCC) 2011 report shows the relative importance of different factors in driving climate change — through their influence on the atmosphere’s radiative forcing, an index of the amount of incoming heat from the sun that is absorbed by the Earth rather than radiated back out into space. Carbon dioxide (top bar) is the greatest factor. The second bar includes methane (CH4), nitrous oxide (N2O), and halocarbons, such as chlorofluorocarbons (CFCs). Other factors have weaker effects.

Caption:
“There’s no question that carbon dioxide is the biggest contributor to human-caused climate change, so that’s the big focus of mitigation efforts. But there are a number of others that are also significant,” says Jessika Trancik, the Atlantic Richfield Career Development Associate Professor in Energy Studies at MIT’s Institute for Data, Systems, and Society.

Caption:
This chart from the Intergovernmental Panel on Climate Change (IPCC) 2011 report shows the relative importance of different factors in driving climate change — through their influence on the atmosphere’s radiative forcing, an index of the amount of incoming heat from the sun that is absorbed by the Earth rather than radiated back out into space. Carbon dioxide (top bar) is the greatest factor. The second bar includes methane (CH4), nitrous oxide (N2O), and halocarbons, such as chlorofluorocarbons (CFCs). Other factors have weaker effects.
Credits:
Image from the 2014 Intergovernmental Panel on Climate Change (IPCC) Synythesis Report

When hearing the words “greenhouse gas,” most people think immediately of carbon dioxide. This is indeed the greenhouse gas that is currently producing the greatest impact on the Earth’s rapidly changing climate. But it is far from the only one making its mark, and for mitigating climate change it’s important to be able to compare the effects of the various gases that contribute to warming the planet.

But that’s not easy to do.

Greenhouse gases vary in not only their sources and the measures needed to control them, but also in how intensely they trap solar heat, how long they last once they’re in the atmosphere, and how they react with other gases and ultimately get flushed out of the air. The differences make it impossible to do the very thing researchers and policymakers want most to do: come up with a simple conversion factor to allow exact comparisons among them.

Let’s take a look at the most extreme case: chlorofluorocarbons (CFCs). Compared to carbon dioxide, CFCs can produce more than 10,000 times as much warming, pound for pound, once they are in the air. Fortunately, CFCs were banned by an international agreement called the Montreal Protocol in 1987 — not because of their dramatic warming potential, although that was a secondary reason recognized at the time, but because they were found to be the primary cause of the rapidly escalating destruction of the Earth’s ozone layer, which protects the planet from dangerous, cancer-causing levels of ultraviolet radiation.

Out of the picture

CFCs “would be a major player by now” in contributing to global warming if they hadn’t been phased out, says Susan Solomon, the Lee and Geraldine Martin Professor of Environmental Studies at MIT. By now, if they were still being used at the same rate as before the phaseout, CFCs would be contributing about one-third as much to the Earth’s greenhouse effect as carbon dioxide, which remains by far the biggest contributor, she says.

For comparison, she says, the Kyoto Protocol (now superceded by the Paris Agreement of 2015), which called for a series of measures to reduce greenhouse gas emissions around the world, produced a total reduction of about 2 gigatons of “carbon equivalent” emissions per year, while the phaseout of CFCs has already eliminated five times as much — an estimated 10 gigatons of carbon equivalent gas per year.

Today, the number-two producer of human-caused greenhouse effects is methane, the main constituent of natural gas. When initially released, methane is about 100 times more potent than carbon dioxide, but its lifetime in the atmosphere is much shorter — about a decade, unlike carbon dioxide’s residence time of centuries. When averaged over a 20-year period, methane’s “greenhouse gas equivalency” is about 72 times that of carbon dioxide, but when looked at on a timescale of 100 years, that equivalency drops to just 25 times.

Methane comes from multiple sources, some of which are relatively hard to measure. For example, leakage from natural gas wells, storage facilities, and distribution systems is a significant source. But because such leaks are highly variable and depend on factors such as well construction methods and maintenance systems for infrastructure — which in some cases are proprietary information — there has been a great deal of controversy over the extent of such leaks. Other sources, such as emissions related to wetlands, deforestation, and cattle, are difficult to measure accurately.

Jessika Trancik, the Atlantic Richfield Career Development Associate Professor in Energy Studies at MIT’s Institute for Data, Systems, and Society, says that because of the very different dynamics of methane in the atmosphere compared to carbon dioxide, it can be misleading to rely on the conventional single-factor comparisons that are often used. Instead, she and collaborators suggested in a 2014 research paper — and further expanded on the idea in 2016 — that a measure of the relative effects of different gases based on specific climate mitigation goals should be used, for example where the time horizon for the comparison is based on a specific stabilization goal.

The usual way of comparing greenhouse gases is through a single conversion factor, called the global warming potential, which uses a somewhat arbitrarily chosen time horizon of 100 years. For methane, this is usually given as a factor of 25 (that is, methane is 25 times more potent than carbon dioxide). But Trancik suggests that it is more meaningful to use “goal-inspired metrics,” which incorporate the different residence times of different gases over a time span that depends on when the emissions occur relative to a mitigation goal: an instantaneous climate impact (ICI) and a cumulative climate impact (CCI). She says that how much weight to give the different factors “comes down to how much you care about the rate of change in the short term, as opposed to the equilibrium state” that the climate will ultimately settle in to — which may not be reached for centuries.

Solomon’s research has recently shown that some of the effects of greenhouse gases can persist for centuries, even after the gases that initially triggered those changes are no longer being emitted at all. Specifically, the expansion of water as it warms, combined with the melting of polar and glacier ice, can lead to significant sea-level rise that would last for centuries even if all new greenhouse gas emissions were stopped altogether. That’s because these gases will remain in the atmosphere and continue to trap heat long after their sources are eliminated — a fact that’s sometimes overlooked in discussions of mitigating climate change. If all carbon dioxide emissions were eliminated by 2050, Solomon and her co-authors found, as much as half of the emissions would still be in the air 750 years later, and still warming the planet.

“There’s no question that carbon dioxide is the biggest contributor to human-caused climate change,” Trancik says, “so that’s the big focus of mitigation efforts. But there are a number of others that are also significant. These non-carbon dioxide emissions often come from some sort of leakage in the supply system, unlike the direct emissions of carbon dioxide that result from combusting carbon-containing fossil fuels. There are opportunities to clean these systems up to reduce leakage, though it’s not always easy.”

Gases are not the only contributors to the greenhouse effect: Black carbon, otherwise known as soot, as well as some other particulate matter can also play a role. But such materials have even shorter residence times, typically just days or weeks, as they tend to be flushed out of the air by the next rainfall.

Which brings us to the biggest greenhouse gas of all: water vapor. There’s no doubt that water vapor is responsible for more greenhouse warming than any other atmospheric constituent. But water vapor’s behavior depends on the climate, so it is not a driver of climate change but rather an amplifying feedback, since the water cycle is a constant part of the atmospheric circulation. As the air gets warmer, it can hold more water vapor, so a warming climate leads to more vapor in the air, providing a feedback effect — and potentially leading to dramatic changes in rainfall patterns. But, water vapor only stays around until the next rainfall. “Water vapor is a slave to the climate system, it’s not a master,” Solomon says.

How much of a difference will the Paris Agreement make?