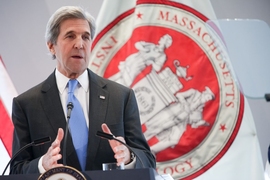 ↓ Download Image
Caption: U.S. Secretary of State John Kerry said in an address at MIT on Monday that the effort to limit climate change was a dire “race against time” but one that could be successful due to the economic promise of renewable energy. 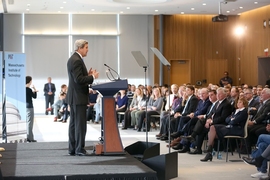 ↓ Download Image
Caption: Speaking before a capacity audience of about 250 people in MIT’s Samberg Conference Center, Kerry discussed the possibility of a clean-energy revolution, enabled by, among other things, falling prices of wind and solar power. 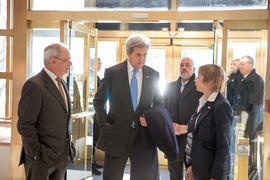 Caption:
U.S. Secretary of State John Kerry said in an address at MIT on Monday that the effort to limit climate change was a dire “race against time” but one that could be successful due to the economic promise of renewable energy.

Caption:
Speaking before a capacity audience of about 250 people in MIT’s Samberg Conference Center, Kerry discussed the possibility of a clean-energy revolution, enabled by, among other things, falling prices of wind and solar power.

Voicing both concern and confidence, U.S. Secretary of State John Kerry said in an address at MIT on Monday that the effort to limit climate change was a dire “race against time,” but one that could be successful due to the economic promise of renewable energy.

Amid record temperatures and rising sea levels that stem in large part from carbon emissions, Kerry stated, we must act quickly “to avoid the catastrophe we will inevitably see if we allow carbon emissions to go up, and up, and up.” Moreover, he added, “We need to speed it up dramatically because we are in a race against time.”

However, speaking before a capacity audience of about 250 people in MIT’s Samberg Conference Center, Kerry talked at greater length about the upsides of a prospective clean-energy revolution, referencing the falling prices of wind and solar power and observing that by making renewable energy a major growth industry, “we can put millions of people to work.” 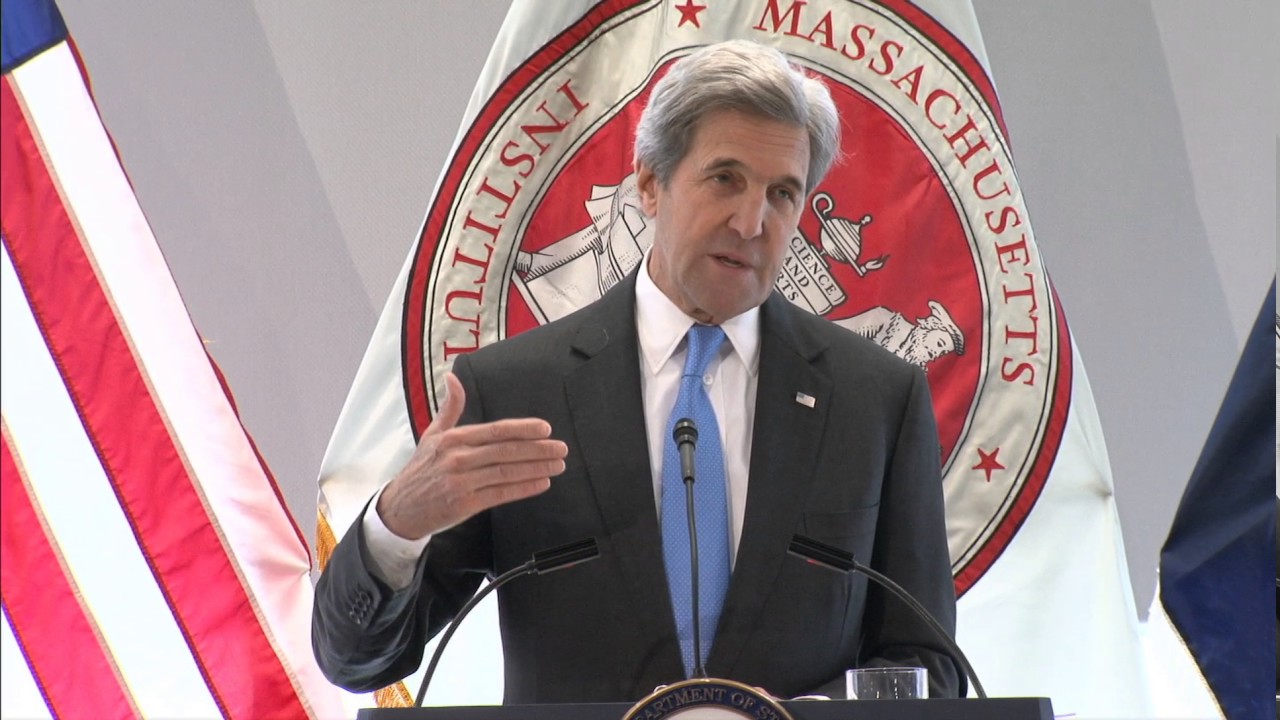 The speech constituted one of the last major public statements Kerry is expected to make on climate change as Secretary of State before he leaves office with the change of administration later this month. Climate change efforts have been a key part of Kerry’s portfolio, and he highlighted the State Department’s recent work on the topic.

Kerry hailed the 2015 Paris Agreement, in which over 190 countries agreed to limit greenhouse gas emissions, and contended that the extensive bilateral U.S.-China climate negotiations, leading to a 2014 announcement of climate cooperation, “changed the whole playing field” by showing how committed the two countries were to an evolving approach on energy.

The Paris Agreement also signaled to entrepreneurs, innovators, and investors that the renewable energy sector would remain a growth industry, Kerry said, and he called on his audience to participate in the transformation of energy.

“Brilliant minds trained at MIT are behind some of the most transformative innovations in history,” Kerry said, suggesting the Institute’s students and entrepreneurs could help mitigate climate change while developing “the greatest economic opportunity the world has ever known.”

Maria Zuber, MIT’s vice president for research, introduced Kerry before his speech by noting that environmental protection has been a priority of his throughout his time in the Senate and at the State Department. "Today, it is starkly obvious that society must act quickly and boldly to minimize our emissions of greenhouse gases into the atmosphere,” Zuber said. "Yet as Secretary Kerry knows well, acting against climate change is not only about avoiding potential catastrophe: It is also an economic imperative, and an incredible opportunity.”

“We know how to do these things”

As Kerry noted in his remarks, 2016 produced the highest average global temperatures ever recorded, while each of the last three decades have been, consecutively, the warmest ever recorded.

He also recounted a recent visit he made to the scientific stations of Antarctica, where he was given a vial of air containing over 401 parts per million of carbon dioxide. Many scientists have stated that limiting the carbon dioxide in the atmosphere to 350 parts per million is a necessity in order to prevent climate change from having its most drastic potential effects.

“The natural world is changing in obvious and deeply troubling ways,” Kerry said.

Making the climate change problem all the more frustrating, Kerry added, is that we understand what will solve the problem: developing inexpensive, carbon-free sources of energy.

“We know how to do these things,” Kerry observed. As he detailed, the prices of large-scale wind and solar projects have in some places become competitive with coal, which is the least expensive form of fossil fuel energy in many regions. In some recent cases, contracts for large-scale renewables have been signed for prices as low as 3 cents per kilowatt-hour.

Solar energy costs have dropped by 62 percent since 2009, Kerry noted, while the number of solar-industry jobs has grown by over 20 percent in the U.S. in each of the last three years. He cited a World Bank study stating that every $1 million of investment in renewable energy yields as many jobs as the same amount of investment in fossil fuels.

This means that “market-based forces are already beginning to shift” in the direction of clean energy, Kerry said, while adding that as a matter of governance, “very few public policy choices present as much upside.”

Before his speech, Kerry met with MIT President L. Rafael Reif; as Kerry related in his talk, the two discussed MIT initiatives on climate matters. After his speech, Kerry and Deputy Secretary of State Anthony Blinken then met for a roundtable discussion with a group of about 20 MIT faculty and industry and government experts.

The roundtable dialogue, chaired by Zuber, focused on the future of employment in light of ongoing innovation and automation, areas of concern to the State Department given large-scale trends in employment and globalization. The MIT faculty and other business leaders discussed recent developments in artificial intelligence; ways in which employees can benefit from automation and technology rather than being displaced by them; and the prospects for job growth in advanced manufacturing.

Kerry has served as U.S. Secretary of State since early 2013, a time period spanning President Barack Obama’s second term in office. Previously, Kerry served nearly five full terms as a U.S. senator from Massachusetts, starting in 1984; he was previously elected as the state’s lieutenant governor, in 1982. In 2004, Kerry was the Democratic Party’s nominee for president.

In his public remarks, Kerry, the son of a diplomat, called the position of Secretary of State “about the best job anybody could imagine” and said he would remain engaged and active as a private citizen on many civic matters, including climate change.

“What we do right now, today, matters,” Kerry told the audience. “We don’t get a second chance on this one.”

Bruce Gellerman reports for WBUR that during an address at MIT, Sec. of State John Kerry urged action on climate change. “Unless we take the steps necessary to change the course that our planet is on, the impacts that we have already seen will pale in comparison to what we will witness in years to come," Kerry explained.

During a speech at MIT on climate change, Sec. of State John Kerry urged researchers to continue developing clean energy technologies, reports Scott Malone for Reuters. Researchers and innovators will create "the technological advances that forever revolutionize the way we power our world," he noted.

Boston Globe reporter Jim O’Sullivan writes about a speech Sec. of State John Kerry delivered at MIT on the perils posed by climate change. “If we don’t go far enough fast enough, the damage we inflict could take centuries to undo — if it can be undone at all. We don’t get a second chance on this one,” Kerry said.