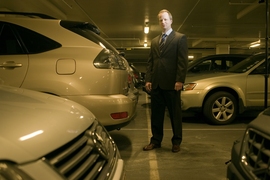 In recent years, proponents of clean energy have taken heart in the falling prices of solar and wind power, hoping they will drive an energy revolution. But a new study co-authored by an MIT professor suggests otherwise: Technology-driven cost reductions in fossil fuels will lead us to continue using all the oil, gas, and coal we can, unless governments pass new taxes on carbon emissions.

“If we don’t adopt new policies, we’re not going to be leaving fossil fuels in the ground,” says Christopher Knittel, an energy economist at the MIT Sloan School of Management. “We need both a policy like a carbon tax and to put more R&D money into renewables.”

While renewable energy has made promising gains in just the last few years — the cost of solar dropped by about two-thirds from 2009 to 2014 — new drilling and extraction techniques have made fossil fuels cheaper and markedly increased the amount of oil and gas we can tap into. In the U.S. alone, oil reserves have expanded 59 percent between 2000 and 2014, and natural gas reserves have expanded 94 percent in the same time.

“You often hear, when fossil fuel prices are going up, that if we just leave the market alone we’ll wean ourselves off fossil fuels,” adds Knittel. “But the message from the data is clear: That’s not going to happen any time soon.”

This trend — in which cheaper renewables are outpaced by even cheaper fossil fuels — portends drastic climate problems, since fossil fuel use has helped produce record warm temperatures worldwide.

“Such scenarios imply difficult-to-imagine change in the planet and dramatic threats to human well-being in many parts of the world,” the paper states. The authors add that “the world is likely to be awash in fossil fuels for decades and perhaps even centuries to come.”

The paper, “Will We Ever Stop Using Fossil Fuels?,” is published in the Journal of Economic Perspectives. The authors are Knittel, who is MIT’s William Barton Rogers Professor in Energy; Michael Greenstone, the Milton Friedman Professor in Economics and the College at the University of Chicago; and Thomas Covert, an assistant professor at the Booth School of Business at the University of Chicago. The scholars examine costs over a time frame of five to 10 years, stating that further forecasts would be quite speculative, although the trend of cheaper fossil fuels could continue longer.

At least two technological advances have helped lower fossil fuel prices and expanded reserves: hydraulic fracturing, or fracking, which has unlocked abundant natural gas supplies, and the production of oil from tar sands. Canada, where this type of oil production began in 1967, did not recognize tar sands as reserves until 1999 — an energy-accounting decision that increased world oil reserves by about 10 percent.

“There are hydrocarbons that we can now take out of the ground that 10 or 20 years ago we couldn’t,” Knittel observes.

So whereas some energy analysts once thought the apparently limited amount of oil reserves would make the price of oil unfeasibly high at some point, that dynamic seems less likely now.

To see how much better firms are at extracting fossil fuels from the Earth, consider this: The probability of an exploratory oil well being successful was 20 percent in 1949 and just 16 percent in the late 1960s, but by 2007 that figure had risen to 69 percent, and today it’s around 50 percent, according to the U.S. Energy Information Administration.

As a result of these improved oil and gas extraction techniques, we have consistently had about 50 years’ worth of accessible oil and natural gas reserves in the ground over the last 30 years, the scholars note.

All told, global consumption of fossil fuels rose significantly from 2005 through 2014: about 7.5 percent for oil, 24 percent for coal, and 20 percent for natural gas. About 65 percent of global greenhouse gas emissions are derived from fossil fuels, according to the U.S. Environmental Protection Agency. Of those emissions, coal generates about 45 percent, oil around 35 percent, and natural gas about 20 percent.

To be sure, renewable energy has seen an impressive decline in its prices within the last decade. But looking at the “levelized” cost of energy (which accounts for its long-term production and costs), solar is still about twice as expensive as natural gas. The need to handle sharp evening increases in power consumption — what energy analysts call the “duck curve” of demand — also means power suppliers, already wary of solar power’s potential to reduce their revenues, may continue to invest in fossil fuel-based power plants.

“It’s certainly the case that solar and wind prices have fallen dramatically and battery costs have fallen,” Knittel says. “But the price of gas is a third almost of what it used to be. It’s tough to compete against $1.50 gasoline. On the electricity side … the cheap natural gas still swamps, in a negative way, the cost of solar and even wind.”

Emphasizing the case for a carbon tax

That may change, of course. As Knittel observes, new solar techniques — such as thin-film layers that integrate solar arrays into windows — may lead to even steeper reductions in the price of renewables, especially as they could help reduce installation costs, a significant part of the solar price tag.

Still, the immediate problem of accumulating carbon emissions means some form of carbon tax is necessary, Knittel says — especially given what we now know about declining fossil fuel costs.

“Clearly we need to get out in front of climate change, and the longer we wait, the tougher it’s going to be,” Knittel emphasizes.

Knittel supports the much-discussed policy lever of a carbon tax to make up for the disparity in energy costs. That concept could take several specific forms. One compelling reason for it, from an economists’ viewpoint, is that fossil fuels impose costs on society — “externalities” — that users do not share. These include the increased health care costs that result from fossil fuel pollution, or the infrastructure costs that are likely to result from rising sea levels.

Knittel adds: “The point of the paper is that if we don’t adopt policies, we’re not leaving fossils fuels in the ground.”

A study co-authored by Prof. Christopher Knittel finds that technological advances are needed to reduce the use of oil in the car industry, according to The Economist. The researchers found that “the price of batteries to power EVs would need to fall by a factor of three, and they would need to charge much faster.”

In an interview with Eduardo Porter of The New York Times, Prof. Christopher Knittel speaks about whether a carbon tax could be effective in the U.S. According to Porter, Knittel explains that “a properly calibrated carbon price in the United States could effectively replace all the climate-related regulations businesses hate so much.”

3 Questions: Are we entering a golden age of natural gas trade?