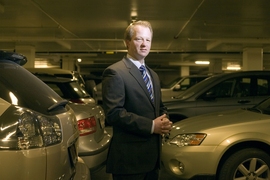 With cap-and-trade legislation on greenhouse-gas emissions having stalled in Congress in 2010, the Obama administration has taken a different approach to climate policy: It has used the mandate of the Environmental Protection Agency (EPA) to propose a policy limiting power-plant emissions, since electricity consumption produces about 40 percent of U.S. greenhouse gases. (The administration also announced a bilateral agreement with China this week, which sets overall emissions-reductions targets.)

The EPA’s initial proposal is now under public review, before the agency issues a final rule in 2015. Christopher Knittel, the William Barton Rogers Professor of Energy Economics at the MIT Sloan School of Management, is one of 13 economists who co-authored an article about the policy in the journal Science this week. While the plan offers potential benefits, the economists assert, some of its details might limit the policy’s effectiveness. MIT News talked with Knittel about the issue.

Q. How is the EPA’s policy for power plants intended to work?

A. The Clean Power Plan calls for different emissions reductions depending on the state. This state-specific formula has four “buckets:” efficiency increases at the power plant; shifting from coal to natural gas; increases in generation from low-carbon renewables such as wind; and increases in energy efficiency within the state. So they applied these four things and asked what changes were “adequately demonstrated” to generate state-specific required reductions.

Q. The Science piece emphasizes that the EPA’s plan uses a ratio-based means of limiting emissions: the amount of greenhouse gases divided by the amount of electricity consumed. So a state could add renewable energy, lower its ratio, but not reduce total emissions. What are the advantages and disadvantages of doing this?

A. The targets are an emissions rate: tons of CO2 [emitted] per megawatt-hour of electricity generation. Then it’s really up to the states to determine how they’re going to achieve the reductions in this rate. So one strategy is to increase total electricity generated. This compliance strategy, unfortunately, is what makes rate-based regulation economically inefficient.

The states also have the option to convert that rate-based ratio target into what the EPA is calling a mass-based target, total tons of greenhouse-gas emissions. This would effectively imply the state is going to adopt a cap-and-trade program to reach its requirements.

In current work, we — scholars Jim Bushnell, Stephen Holland, Jonathan Hughes, and I — are investigating the incentives states have to adopt to convert their rate-based mandate into a mass-based mandate. Unfortunately, we are finding that states rarely want to [use a mass-based target], which is a pity, because the mass-based regulation is the most efficient regulation, from an economist’s perspective. Holland, Hughes, and I have done work in the transportation sector that shows that when you do things on a rate base, as opposed to a mass base, it is at least three times more expensive, and more costly to society — often more than five times more costly.

Q. Why did the EPA approach it this way?

A. I can only speculate as to why the EPA chose to define the regulation as a rate instead of total greenhouse gas emissions. Regulating a rate is often cheaper from the firm’s perspective, even though it is economically inefficient. Why the EPA chose to define things at the state level is more clear: The Clean Air Act … is written in such a way to leave it up to the states.

But if everyone’s doing their own rate- or mass-based standard, then you don’t take advantage of potentially a large efficiency benefit from trading compliance across states. That is, it might be cheaper for one state to increase its reductions, allowing another state to abate less.

The most ideal regulatory model is that everyone’s under one giant mass-based standard, one big cap-and-trade market. Even if every state’s doing its own cap-and-trade market, that’s unlikely to lead to the efficient outcome. It might be cheaper for California or Montana or Oregon to reduce their greenhouse-gas emissions, but as soon as they meet their standard, they’re going to stop.

Q. The Science article says that certifying efficiency-based gains is a crucial factor. Could you explain this?

A. Given how the regulation treats efficiency, it really puts in the forefront the importance of understanding the real-world reduction in energy consumption coming from efficiency investments. Let’s say I reduce electricity consumption by 100 megawatt-hours through increasing efficiency in buildings. Within the [EPA’s] policy, that reduction is treated as if I’m generating 100 megawatt-hours from a zero-carbon technology. So that increases the denominator in the ratio [of greenhouse gases produced to electricity consumed]. One concern, though, is that often the actual returns from energy-efficiency investments aren’t as large as the predicted returns. And that can be because of rebound [the phenomenon by which better energy efficiency allows people to consume more of it], which is a hot topic now, or other behavioral changes.

Behavioral changes can make those efficiency gains larger or smaller, so getting the right number is very important. I’ve heard stories of people who get all-new windows, and the old windows used to let in air, but now they think the house is stuffy, so they keep their windows cracked. We should be doing more field experiments, more randomized controlled trials, to measure the actual returns to energy efficiency.

Another related concern is that it might be left up to the states to tell the EPA what the reduction was from these energy-efficiency investments. And the state might not have any incentive at all to measure them correctly. So there has to be an increase in oversight, and it likely has to be federal oversight.

Q. While you clearly have concerns about the efficacy of the policy, isn’t this one measure among others, intended to lessen the magnitude of the climate crisis?

A. For many of us, the potential real benefit from the clean power rule is that it will change the dynamic in Paris in the [forthcoming international climate] negotiations. For a long time the U.S. could say it was doing some improvements in transportation, but they really weren’t doing anything in electricity, for climate change. My view is there are a lot of countries out there that aren’t going to do anything unless the U.S. does. This might bring some of those countries on board.