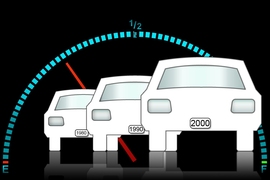 Credits:
Graphic: Christine Daniloff
Contrary to common perception, the major automakers have produced large increases in fuel efficiency through better technology in recent decades. There’s just one catch: All those advances have barely increased the mileage per gallon that autos actually achieve on the road.

Sound perplexing? This situation is the result of a trend newly quantified by MIT economist Christopher Knittel: Because automobiles are bigger and more powerful than they were three decades ago, major innovations in fuel efficiency have only produced minor gains in gas mileage.

Specifically, between 1980 and 2006, the average gas mileage of vehicles sold in the United States increased by slightly more than 15 percent — a relatively modest improvement. But during that time, Knittel has found, the average curb weight of those vehicles increased 26 percent, while their horsepower rose 107 percent. All factors being equal, fuel economy actually increased by 60 percent between 1980 and 2006, as Knittel shows in a new research paper, “Automobiles on Steroids,” just published in the American Economic Review (download PDF).

Thus if Americans today were driving cars of the same size and power that were typical in 1980, the country’s fleet of autos would have jumped from an average of about 23 miles per gallon (mpg) to roughly 37 mpg, well above the current average of around 27 mpg. Instead, Knittel says, “Most of that technological progress has gone into [compensating for] weight and horsepower.”

And considering that the transportation sector produces more than 30 percent of U.S. greenhouse gas emissions, turning that innovation into increased overall mileage would produce notable environmental benefits. For his part, Knittel thinks it is understandable that consumers would opt for large, powerful vehicles, and that the most logical way to reduce emissions is through an increased gas tax that leads consumers to value fuel efficiency more highly.

“When it comes to climate change, leaving the market alone isn’t going to lead to the efficient outcome,” Knittel says. “The right starting point is a gas tax.”

Giving the people what they want

While auto-industry critics have long called for new types of vehicles, such as gas-electric hybrids, Knittel’s research underscores the many ways that conventional internal-combustion engines have improved.

Among other innovations, as Knittel notes, efficient fuel-injection systems have replaced carburetors; most vehicles now have multiple camshafts (which control the valves in an engine), rather than just one, allowing for a smoother flow of fuel, air and exhaust in and out of engines; and variable-speed transmissions have let engines better regulate their revolutions per minute, saving fuel.

To be sure, the recent introduction of hybrids is also helping fleet-wide fuel efficiency. Of the thousands of autos Knittel scrutinized, the most fuel-efficient was the 2000 Honda Insight, the first hybrid model to enter mass production, at more than 70 mpg. (The least fuel-efficient car sold in the United States that Knittel found was the 1990 Lamborghini Countach, a high-end sports car that averaged fewer than nine mpg).

To conduct his study, Knittel drew upon data from the National Highway Transportation Safety Administration, auto manufacturers and trade journals. As those numbers showed, a major reason fleet-wide mileage has only slowly increased is that so many Americans have chosen to buy bigger, less fuel-efficient vehicles. In 1980, light trucks represented about 20 percent of passenger vehicles sold in the United States. By 2004, light trucks — including SUVs — accounted for 51 percent of passenger-vehicle sales.

“I find little fault with the auto manufacturers, because there has been no incentive to put technologies into overall fuel economy,” Knittel says. “Firms are going to give consumers what they want, and if gas prices are low, consumers are going to want big, fast cars.” And between 1980 and 2004, gas prices dropped by 30 percent when adjusted for inflation.

Knittel’s research has impressed other scholars in the field of environmental economics. “I think this is a very convincing and important paper,” says Severin Borenstein, a professor at the Haas School of Business at the University of California at Berkeley. “The fact that cars have muscled up rather than become more efficient in the last three decades is known, but Chris has done the most credible job of measuring that tradeoff.” Adds Borenstein: “This paper should get a lot of attention when policymakers are thinking about what is achievable in improved automobile fuel economy.”

Indeed, Knittel asserts, given consumer preferences in autos, larger changes in fleet-wide gas mileage will occur only when policies change, too. “It’s the policymakers’ responsibility to create a structure that leads to these technologies being put toward fuel economy,” he says.

Among environmental policy analysts, the notion of a surcharge on fuel is widely supported. “I think 98 percent of economists would say that we need higher gas taxes,” Knittel says.

Instead, the major policy advance in this area occurring under the current administration has been a mandated rise in CAFE standards, the Corporate Average Fuel Economy of cars and trucks. In July, President Barack Obama announced new standards calling for a fleet-wide average of 35.5 mpg by 2016, and 54.5 mpg by 2025.

According to Knittel’s calculations, the automakers could meet the new CAFE standards by simply maintaining the rate of technological innovation experienced since 1980 while reducing the weight and horsepower of the average vehicle sold by 25 percent. Alternately, Knittel notes, a shift back to the average weight and power seen in 1980, along with a continuation of the trend toward greater fuel efficiency, would lead to a fleet-wide average of 52 mpg by 2020.

That said, Knittel is skeptical that CAFE standards by themselves will have the impact a new gas tax would. Such mileage regulations, he says, “end up reducing the cost of driving. If you force people to buy more fuel-efficient cars through CAFE standards, you actually get what’s called ‘rebound,’ and they drive more than they would have.” A gas tax, he believes, would create demand for more fuel-efficient cars without as much rebound, the phenomenon through which greater efficiency leads to potentially greater consumption.

Fuel efficiency, Knittel says, has come a long way in recent decades. But when it comes to getting those advances to have an impact out on the road, there is still a long way to go.