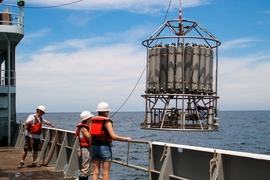 Nitrous oxide (N2O) is a potent greenhouse gas that can contribute to climate change and damage the ozone layer. But its cycling in and out of ocean waters has remained poorly understood, making it difficult to predict how the gas might impact the climate.

Now new research by MIT postdoc Andrew Babbin and three others has provided a way to quantify this cycle, in which N2O — commonly known as laughing gas — is rapidly formed and destroyed in oxygen-poor layers of seawater, and some of the gas is released into the air. The findings, based on computer analysis and sampling of ocean waters from different depths, are presented this week in the journal Science, and show that this source of atmospheric nitrous oxide has been drastically underestimated.

Babbin, a postdoc in MIT’s Department of Civil and Environmental Engineering and the study’s lead author, says that while nitrogen and its compounds are crucial to life, it has been difficult to accurately measure the processes by which these compounds cycle through the land, air, and water.

“There have been a lot of estimates on what the sources and sinks are, both on land and in the ocean,” Babbin says. But the new measurements, he adds, show that in parts of the ocean, those estimates were off by at least a factor of 10.

It turns out that a particular zone of the ocean — a boundary between oxygen-rich surface waters and oxygen-free, or “anoxic,” deep waters — plays a key role in nitrogen cycling. This “suboxic” zone experiences an imbalance between bacterial processes that create N2O and those that break it down — and the excess of N2O created by this imbalance is given off to the atmosphere.

Ocean nitrification begins with nitrogen entering the sea as runoff from agricultural fertilizers and other sources. Marine microbes take in nitrogen compounds, such as ammonia, and chemically modify them, releasing N2O as a byproduct. Other bacteria carry out denitrification, a process that breaks down nitrogen compounds through steps that ultimately lead to nitrogen gas — but which can also release some N2O.

Most of the time, these processes balance out. “The denitrifying bacteria that produce N2O also consume it, and it was thought that these two processes are pretty tightly coupled,” Babbin says. But that’s not the case in the suboxic layer, resulting in leftover N2O that leaks away to the surface.

It had been known that this release of nitrogen gas was oxygen-sensitive, with higher concentrations inhibiting the process, but the level needed to allow or inhibit production of nitrogen was not known. Further, it was assumed that there was some key level at which the whole process turned on or off, Babbin says. But the new research shows that’s not the case: There is an intermediate concentration where the two parts of the process are decoupled, with one step happening much more rapidly than the other.

“It turns out that with a little bit of decoupling — it doesn’t have to be much — there can be large amounts of N2O production,” Babbin says. “Overall rates of denitrification are very, very fast relative to rates of nitrification.” Even a small imbalance, over time and over large areas, can be significant, he adds.

The research, which Babbin carried out as part of his doctoral thesis work at Princeton University, involved taking water samples from various depths at three different locations in the eastern tropical North Pacific, and then measuring these samples in the lab to determine their denitrification rates. The sampling region is one of three known to have extensive suboxic zones, he says, along with the eastern tropical South Pacific and the Arabian Sea.

Babbin’s measurements demonstrate that production of N2O in just these three small regions could equal the total worldwide marine production that had been estimated in climate models, including the most recent International Panel on Climate Change report: some 4 million metric tons of N2O per year. While that amount is dwarfed by carbon dioxide production, N2O is 300 times more potent as a greenhouse gas.

Since ozone-destroying chlorofluorocarbons were banned by international agreement in 1987, N2O is now a leading remaining ozone-destroying compound. Anoxic regions of the ocean are expected to increase significantly in size, thus also expanding suboxic zones and their N2O production — which could amplify climate change.

“These findings are highly significant,” says James Galloway, a professor of environmental sciences at the University of Virginia who was not involved in this research, “as they indicate that now the oceans can be expected to increase their N2O emissions, just as continents are expected to, due to agriculture.”

Besides Babbin, the research team included Amal Jayakumar and Bess Ward at Princeton and Daniele Bianchi at the University of Washington (UW). The work was supported by a National Defense Science and Engineering Graduate Fellowship, the National Science Foundation, and UW.