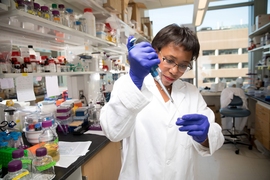 ↓ Download Image
Caption: “If we want to be able to deliver mRNA, then we need a mechanism to be more effective at it because everything that’s been used so far gives you a very small fraction of what would be the optimal efficiency,” says professor Paula Hammond. 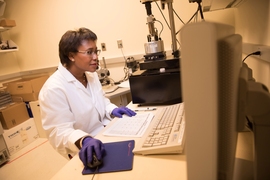 ↓ Download Image
Caption: “If we want to be able to deliver mRNA, then we need a mechanism to be more effective at it because everything that’s been used so far gives you a very small fraction of what would be the optimal efficiency,” says professor Paula Hammond.

Caption:
“If we want to be able to deliver mRNA, then we need a mechanism to be more effective at it because everything that’s been used so far gives you a very small fraction of what would be the optimal efficiency,” says professor Paula Hammond.

By delivering strands of genetic material known as messenger RNA (mRNA) into cells, researchers can induce the cells to produce any protein encoded by the mRNA. This technique holds great potential for administering vaccines or treating diseases such as cancer, but achieving efficient delivery of mRNA has proven challenging.

Now, a team of MIT chemical engineers, inspired by the way that cells translate their own mRNA into proteins, has designed a synthetic delivery system that is four times more effective than delivering mRNA on its own.

“If we want to be able to deliver mRNA, then we need a mechanism to be more effective at it because everything that’s been used so far gives you a very small fraction of what would be the optimal efficiency,” says Paula Hammond, a David H. Koch Professor in Engineering, the head of MIT’s Department of Chemical Engineering, and a member of MIT’s Koch Institute for Integrative Cancer Research.

Hammond is the senior author of the paper, which appears in Angewandte Chemie. The paper’s lead authors are postdoc Jiahe Li and graduate student Yanpu He. Other co-authors in the paper are Wade Wang, Connie Wu, and Celestine Hong from the Hammond lab.

Messenger RNA carries genetic instructions from DNA, which cannot leave the cell nucleus, to the cell’s ribosomes, which assemble proteins based on the mRNA sequence. Messenger RNA is appealing as a potential vehicle to treat disease or deliver vaccines because after an mRNA strand is translated into the desired protein, it eventually degrades.

“It doesn’t change the genetic code,” Hammond says. “There’s no chance that incorporation of a gene might happen, so the safety factor is a lot higher.”

For this approach to work, mRNA has to get into cells efficiently, and once there, it needs to reach the ribosomes to be translated into protein. In a previous study, the MIT researchers found that they could improve the rate of mRNA translation by attaching a protein cap to one end of the mRNA strand. This cap helps mRNA to form a complex that is needed to initiate translation.

In the new study, the researchers focused on the other end of the mRNA molecule. Naturally occurring mRNA usually has a long “poly-A tail,” made up of a long sequence of adenosine repeats, that stabilizes the molecule and helps it to resist being broken down by enzymes in the cell.

The MIT team decided to attach a protein called a poly-A binding protein to this tail. This protein, which is found naturally in cells, helps mRNA to bind to ribosomes and begin the translation process.

The researchers then coated this complex with a type of polymer known as a polypeptide, which is a sequence of modified amino acids strung together in a chain. This polypeptide serves as a scaffold to hold the poly-A binding protein and mRNA in close contact, and it helps to neutralize the negatively charged mRNA. Without that neutralization, mRNA would not be able to pass through cell membranes, which are also negatively charged.

Once the polymer-coated mRNA enters a cell, the poly-A binding protein protects it from being broken down and helps it to link up with ribosomes. The mRNA forms a closed loop so that a ribosome can cycle through it many times, producing many copies of the target protein. In this way, the effect of mRNA, which is a very costly genetic therapeutic, can be significantly enhanced by combination with much cheaper synthetic polypeptides and proteins.

“The conventional approach is just to deliver mRNA into the cells,” Li says. “But once mRNA gets into cells it might be degraded, so we form a complex which is crucial for initiation of mRNA translation.”

The MIT approach also helps to overcome another challenge to delivering mRNA, which is that the molecules are very large, says Peixuan Guo, a professor of pharmaceutics and drug delivery systems at Ohio State University.

“The findings by Paula Hammond’s group in this paper prove that mRNA can be efficiently delivered through the use of poly-A binding proteins,” says Guo, who was not involved in the research. “This technology demonstrates a great increase in delivered payloads and will pave a new way to mRNA delivery.”

The researchers tested this system by delivering mRNA that encodes the gene for luciferase, a glowing protein, into the lungs of mice. They found that with this type of delivery, cells produced four times as much protein as they did when only mRNA was packaged with the same polypeptide for delivery.

One reason that this system is more efficient, the researchers believe, is that it eliminates the need for mRNA to find poly-A binding proteins in the crowded cytoplasm environment after the mRNA enters the cell.

“We realized that cells probably only make enough of this poly-A binding protein to translate their own mRNA,” He says. “Once you deliver excess mRNA, the cell does not have enough of this helper protein to translate it. We realized that we need to give it more helper protein, pre-assemble it with our polypeptides to mimic the structure of protein synthesis, then co-deliver this bio-inspired assembly into the cell.”

In this study, the mRNA particles accumulated in the lungs because of the polypeptide’s positive charge, which allowed the particles to attach to red blood cells and catch a ride to the lungs. However, the researchers now plan to explore modifying the particles with polymers that will direct them to other locations in the body, including tumors.

They are also working on further improving the stability of the polypeptide molecules by adding a hydrophobic tail to one end, and by attaching a polymer called PEG. Both of these modifications should help the molecules to circulate longer in the body, allowing them to reach their intended destinations.