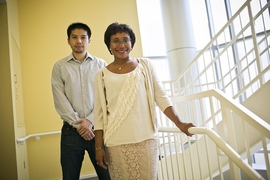 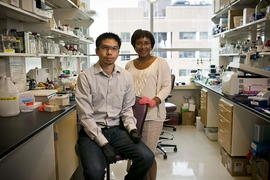 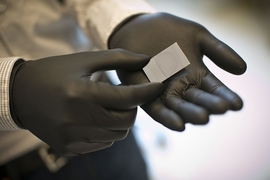 Caption:
MIT professor Paula Hammond (right) and Bryan Hsu PhD' 14 have developed a nanoscale film that can be used to deliver medication, either directly through injections, or by coating implantable medical devices.
Credits:
Photo: Dominick Reuter

Caption:
MIT professor Paula Hammond and Bryan Hsu PhD' 14 have developed a nanoscale film that can be used to deliver medication, either directly through injections, or by coating implantable medical devices.
Credits:
Photo: Dominick Reuter

About one in four older adults suffers from chronic pain. Many of those people take medication, usually as pills. But this is not an ideal way of treating pain: Patients must take medicine frequently, and can suffer side effects, since the contents of pills spread through the bloodstream to the whole body.

Now researchers at MIT have refined a technique that could enable pain medication and other drugs to be released directly to specific parts of the body — and in steady doses over a period of up to 14 months.  The method uses biodegradable, nanoscale “thin films” laden with drug molecules that are absorbed into the body in an incremental process.

“It’s been hard to develop something that releases [medication] for more than a couple of months,” says Paula Hammond, the David H. Koch Professor in Engineering at MIT, and a co-author of a new paper on the advance. “Now we’re looking at a way of creating an extremely thin film or coating that’s very dense with a drug, and yet releases at a constant rate for very long time periods.”

In the paper, published today in the Proceedings of the National Academy of Sciences, the researchers describe the method used in the new drug-delivery system, which significantly exceeds the release duration achieved by most commercial controlled-release biodegradable films.

“You can potentially implant it and release the drug for more than a year without having to go in and do anything about it,” says Bryan Hsu PhD ’14, who helped develop the project as a doctoral student in Hammond’s lab. “You don’t have to go recover it. Normally to get long-term drug release, you need a reservoir or device, something that can hold back the drug. And it’s typically nondegradable. It will release slowly, but it will either sit there and you have this foreign object retained in the body, or you have to go recover it.”

The paper was co-authored by Hsu, Myoung-Hwan Park of Shamyook University in South Korea, Samantha Hagerman ’14, and Hammond, whose lab is in the Koch Institute for Integrative Cancer Research at MIT.

The research project tackles a difficult problem in localized drug delivery: Any biodegradable mechanism intended to release a drug over a long time period must be sturdy enough to limit hydrolysis, a process by which the body’s water breaks down the bonds in a drug molecule. If too much hydrolysis occurs too quickly, the drug will not remain intact for long periods in the body. Yet the drug-release mechanism needs to be designed such that a drug molecule does, in fact, decompose in steady increments.

To address this, the researchers developed what they call a “layer-by-layer” technique, in which drug molecules are effectively attached to layers of thin-film coating. In this specific case, the researchers used diclofenac, a nonsteroidal anti-inflammatory drug that is often prescribed for osteoarthritis and other pain or inflammatory conditions. They then bound it to thin layers of poly-L-glutamatic acid, which consists of an amino acid the body reabsorbs, and two other organic compounds. The film can be applied onto degradable nanoparticles for injection into local sites or used to coat permanent devices, such as orthopedic implants.

In tests, the research team found that the diclofenac was steadily released over 14 months. Because the effectiveness of pain medication is subjective, they evaluated the efficacy of the method by seeing how well the diclofenac blocked the activity of cyclooxygenase (COX), an enzyme central to inflammation in the body.

“We found that it remains active after being released,” Hsu says, meaning that the new method does not damage the efficacy of the drug. Or, as the paper notes, the layer-by-layer method produced “substantial COX inhibition at a similar level” to pills.

The method also allows the researchers to adjust the quantity of the drug being delivered, essentially by adding more layers of the ultrathin coating.

A viable strategy for many drugs

Hammond and Hsu note that the technique could be used for other kinds of medication; an illness such as tuberculosis, for instance, requires at least six months of drug therapy.

“It’s not only viable for diclofenac,” Hsu says. “This strategy can be applied to a number of drugs.”

Indeed, other researchers who have looked at the paper say the potential medical versatility of the thin-film technique is of considerable interest.

"I find it really intriguing because it's broadly applicable to a lot of systems," says Kathryn Uhrich, a professor in the Department of Chemistry and Chemical Biology at Rutgers University, adding that the research is "really a nice piece of work."

To be sure, in each case, researchers will have to figure out how best to bind the drug molecule in question to a biodegradable thin-film coating. The next steps for the researchers include studies to optimize these properties in different bodily environments and more tests, perhaps with medications for both chronic pain and inflammation.

A major motivation for the work, Hammond notes, is “the whole idea that we might be able to design something using these kinds of approaches that could create an [easier] lifestyle” for people with chronic pain and inflammation.

The research described in the paper was supported by funding from the U.S. Army and the U.S. Air Force.

Andrea Timpano of Boston Magazine reports on the new biodegradable nanoscale film developed by MIT researchers. The film could be used to deliver long-lasting medication for patients suffering from chronic pain.

Nanoparticles, made to order — inside and out

Practicing medicine at the nanoscale