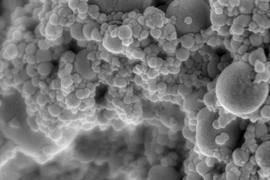 Credits:
Image courtesy of the Hammond Lab
Every year, more than a million Americans receive an artificial hip or knee prosthesis. Such implants are designed to last many years, but in about 17 percent of patients who receive a total joint replacement, the implant eventually loosens and has to be replaced early, which can cause dangerous complications for elderly patients.

To help minimize these burdensome operations, a team of MIT chemical engineers has developed a new coating for implants that could help them better adhere to the patient’s bone, preventing premature failure.

“This would allow the implant to last much longer, to its natural lifetime, with lower risk of failure or infection,” says Paula Hammond, the David H. Koch Professor in Engineering at MIT and senior author of a paper on the work appearing in the journal Advanced Materials.

The coating, which induces the body’s own cells to produce bone that fixes the implant in place, could also be used to help heal fractures and to improve dental implants, according to Hammond and lead author Nisarg Shah, a graduate student in Hammond’s lab.

An alternative to bone cement

Artificial hips consist of a metal ball on a stem, connecting the pelvis and femur. The ball rotates within a plastic cup attached to the inside of the hip socket. Similarly, artificial knees consist of plates and a stem that enable movement of the femur and tibia. To secure the implant, surgeons use bone cement, a polymer that resembles glass when hardened. In some cases, this cement ends up cracking and the implant detaches from the bone, causing chronic pain and loss of mobility for the patient.

“Typically, in such a case, the implant is removed and replaced, which causes tremendous secondary tissue loss in the patient that wouldn’t have happened if the implant hadn’t failed,” Shah says. “Our idea is to prevent failure by coating these implants with materials that can induce native bone that is generated within the body. That bone grows into the implant and helps fix it in place.”

The new coating consists of a very thin film, ranging from 100 nanometers to one micron, composed of layers of materials that help promote rapid bone growth. One of the materials, hydroxyapatite, is a natural component of bone, made of calcium and phosphate. This material attracts mesenchymal stem cells from the bone marrow and provides an interface for the formation of new bone. The other layer releases a growth factor that stimulates mesenchymal stem cells to transform into bone-producing cells called osteoblasts.

Once the osteoblasts form, they start producing new bone to fill in the spaces surrounding the implant, securing it to the existing bone and eliminating the need for bone cement. Having healthy tissue in that space creates a stronger bond and greatly reduces the risk of bacterial infection around the implant.

“When bone cement is used, dead space is created between the existing bone and implant stem, where there are no blood vessels. If bacteria colonize this space they would keep proliferating, as the immune system is unable to reach and destroy them. Such a coating would be helpful in preventing that from occurring,” Shah says.

It takes at least two or three weeks for the bone to fill in and completely stabilize the implant, but a patient would still be able to walk and do physical therapy during this time, according to the researchers.

There have been previous efforts to coat orthopedic implants with hydroxyapatite, but the films end up being quite thick and unstable, and tend to break away from the implant, Shah says. Other researchers have experimented with injecting the growth factor or depositing it directly on the implant, but most of it ends up draining away from the implant site, leaving too little behind to have any effect.

The MIT team can control the thickness of its film and the amount of growth factor released by using a method called layer-by-layer assembly, in which the desired components are laid down one layer at a time until the desired thickness and drug composition are achieved.

“This is a significant advantage because other systems so far have really not been able to control the amount of growth factor that you need. A lot of devices typically must use quantities that may be orders of magnitude more than you need, which can lead to unwanted side effects,” Shah says.

Jeremy Gilbert, professor of biomaterials at Syracuse University, says the work is “an elegant approach to engineering surfaces to drive bone healing. It’s a nice combination of polymers, ceramics and growth factors, combined in a way that does look like it has some effects on the stem cell that are growing on it.”

Gilbert, who was not involved in the study, added that more research is needed to determine if the coating will have the same effects in living animals. The MIT team is now performing animal studies that have shown promising results: The coatings lead to rapid bone formation, locking the implants in place.

This coating could be used not only for joint replacements, but also for fixation plates and screws used to set bone fractures. “It is very versatile. You can apply it to any geometry and have uniform coating all around,” Shah says.

Another possible application is in dental implants. Conventionally, implanting an artificial tooth is a two-step process. First, a threaded screw is embedded in the jaw; this screw has to stabilize by integrating with the surrounding bone tissue for several months before the patient returns to the clinic to have the new crown attached to the screw. This could be reduced to a one-step process in which the patient receives the entire implant using a version of these coatings.