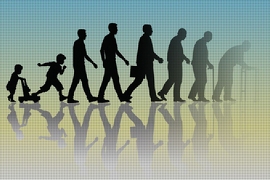 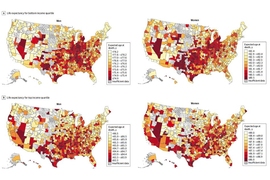 ↓ Download Image
Caption: A new study co-authored by MIT researchers has shown strong associations between wealth and longevity in the United States.
Credits: Courtesy of the researchers and the Journal of the American Medical Association

Caption:
A new study co-authored by MIT researchers has shown strong associations between wealth and longevity in the United States.
Credits:
Courtesy of the researchers and the Journal of the American Medical Association

Poverty in the U.S. is often associated with deprivation, in areas including housing, employment, and education. Now a study co-authored by two MIT researchers has shown, in unprecedented geographic detail, another stark reality: Poor people live shorter lives, too.

“When we think about income inequality in the United States, we think that low-income Americans can’t afford to purchase the same homes, live in the same neighborhoods, and buy the same goods and services as higher-income Americans,” says Michael Stepner, a PhD candidate in MIT’s Department of Economics. “But the fact that they can on average expect to have 10 or 15 fewer years of life really demonstrates the level of inequality we’ve had in the United States.”

Stepner and Sarah Abraham, another PhD candidate in MIT’s Department of Economics, are among the co-authors of a newly published paper summarizing the study’s findings, and have played central roles in a three-year research project establishing the results.

In addition to reporting the size and growth of the income gap, the study finds that the average lifespan varies considerably by region in the U.S. (by as much as 4.5 years), but that the sources of that regional variation are subtle, and, like the aggregate national gap, subject to further investigation.

“The patterns are not exactly what you might expect,” says Abraham, noting that regional variation in longevity does not seem strongly correlated with factors such as access to health care, environmental issues, income inequality, or the job market.

“We don’t find those to be as highly correlated with differences in longevity as we find measures of health behavior, such as smoking rates or obesity rates” [to be correlated with lifespan], Abraham observes.

The paper, “The Association between Income and Life Expectancy in the United States, 2001-2014,” is being published today by the Journal of the American Medical Association.

The geography of mortality

The researchers looked at 1.4 billion anonymized income tax filings from the federal government, and combined that with mortality data from the years 2001 through 2014 from the Social Security Administration. This represents the most complete geographic and demographic landscape of mortality in America.

Among other things, the growth of the gap in mortality rates — by nearly three years — struck the researchers as noteworthy. To put it in perspective, they note that federal health officials estimate that curing all forms of cancer would add three years to the average lifespan.

“That change over the last 15 years is the equivalent of the richest Americans winning the war on cancer,” Stepner observes.

At the same time, the researchers are quick to point out that the findings cannot immediately be reduced to simple cause-and-effect explanations. For instance, as social scientists have long observed, it is very hard to say whether having wealth leads to better health — or if health, on aggregate, is a prerequisite for accumulating wealth. Most likely, the two interact in complex ways, something the study cannot resolve.

“It’s a descriptive story,” Stepner says of the data.

A new puzzle emerging from the study, the authors note, is that differences in lifespan exist along the entire continuum of wealth in the U.S.; it is not as if, say, the top 10 percent of earners cluster around identical average lifespans.

“As you go up in the income distribution, life expectancy continues to increase, at every point,” Stepner says.

And then there are the new geographic patterns in the findings. For instance: Eight of the 10 states with the lowest life expectancies for people in the bottom income quartile form a contiguous belt, curving around from Michigan through Ohio, Indiana, Kentucky, Tennessee, Arkansas, Oklahoma, and Kansas.

So while average lifespans for everyone are lower in some Southern states, the poor do not fare worse in those places than they do in other regions.

“The Deep South is the lowest-income area in America, but when we’re looking at life expectancy conditional on having a low income, it’s not worse to be poor in the Deep South than it is in other areas of America,” Stepner says. “It’s just that there are far more poor people living in the South.”

The researchers say that more analysis on the sources of local variation in lifespans could be among the most fruitful research areas stemming from the current paper. The research team is releasing all the data from the study today as well.

Among the municipalities where low-income people have experienced the greatest increases in lifespan from 2001-2014, for example, are Toms River, New Jersey; Birmingham, Alabama; and Richmond, Virginia. Cities with the largest drops in lifespan among the poor are Tampa and Pensacola, Florida; and Knoxville, Tennessee.

“We’re not making any normative statements about what policy should be, but there is a wide dispersion of [results] happening in the U.S.,” Abraham says. “That might need to be addressed at a more granular level.”

Places with the overall longest lifespans for the poor include New York City, with a chart-topping 81.8 years on average, as well as a passel of cities in California. The bottom of that list includes Gary, Indiana (77.4 years on average); Las Vegas; and Oklahoma City.

Among the top income earners, people live longest in Salt Lake City (87.8 years on average); Portland, Maine; and Spokane, Washington. The rich have the shortest lives in Las Vegas (84.1 years on average); Gary, Indiana; and Honolulu.

Abraham also observes that the findings could have implications for national policy programs, as well.

“Things like Social Security aren’t going to be as redistributive if the richer people are getting paid for 10 more years than the poorer people,” she says.

Overall, the researchers say they hope to spark a larger discussion among the research and policy communities.

“We don’t have all the answers,” Abraham says. “But it’s really important to make these statistics widely used so people have an idea of what the magnitude of these problems is, where they might focus their attention, and why this matters.”

The research was supported by a grant from the U.S. Social Security Administration to the National Bureau of Economic Research; the National Institutes of Health; the Social Sciences and Humanities Research Council of Canada; the Smith Richardson Foundation; and the Laura and John Arnold Foundation.

A new study co-authored by MIT researchers finds that people who live in expensive, well-educated cities tend to live longer, reports Jim Zarroli for NPR. Zarroli explains that “the study suggests that the relationship between life expectancy and income is not iron-clad, and changes at the local level can make a big difference.”

Emily Badger and Christopher Ingraham write for The Washington Post about a study by MIT researchers that examines how poverty impacts life expectancies across the country. “What's especially striking is that the poor live even shorter lives in some places than others. They have longer life expectancies in affluent, cities with highly educated populations,” they explain.

Bloomberg News reporter John Tozzi writes about a new study co-authored by MIT researchers that finds a growing disparity between the life expectancies of rich and poor Americans. The researchers found that, “top earning Americans gained 2 to 3 years of life expectancy between 2001 and 2014, while those at the bottom gained little or nothing.”

Grad student Michael Stepner speaks with Peter O’Dowd of Here & Now about his research examining how the life expectancy gap between the rich and poor has grown. Stepner explains the research suggests an opportunity for local “policies to address these gaps and improve life expectancies for low-income Americans.”

Full story via Here and Now →