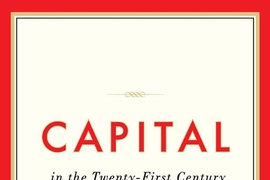 ↓ Download Image
Caption: Cover of "Capital in the 21st Century"

Caption:
Cover of "Capital in the 21st Century"

For a couple of generations of Americans growing up after the Great Depression and World War II, it seemed normal that the middle class would command a stable share of a growing economic state: The slice of income gained by the top 10 percent of earners mostly held steady, at just under 35 percent, from the 1940s through the early 1980s.

But since then, inequality has risen: The top 10 percent of earners now accrue nearly half of the nation’s income, a level last seen in the 1920s. For Thomas Piketty, a scholar at the Paris School of Economics, we have re-entered “patrimonial capitalism,” in which inherited wealth, not work, begets further wealth.

Piketty’s book detailing this thesis, the unexpected bestseller “Capital in the 21st Century,” has made him, as The New York Times put it, a “rock star” among intellectuals. In a seminar talk on Friday at MIT, Piketty continued his efforts to cast economic history in a new light. The midcentury shift toward greater equality, when viewed against a few centuries of economic data compiled in Piketty’s book, looks more like an aberration, not the natural order of things.

“We are talking about a really deep trend,” Piketty said in his remarks at MIT. “Nobody knows how far this is going to go.”

Thus, he added, we should retool our policies if we want to have greater equality, rather than wait for a repeat of the postwar era: “There are good reasons to believe what happened in the 20th century was unusual,” Piketty added.

Touring in the U.S. over the last week, Piketty has given large public lectures and met with Treasury Secretary Jacob Lew, the White House Council of Economic Advisors, and officials from both the Government Accountability Office and the International Monetary Fund.

But at MIT, Piketty presented his work in a rather different setting: the Institute’s Macroeconomics Seminar, a regular workshop in the Department of Economics where scholars present their research. The seminar is currently organized by Ivan Werning, the Robert M. Solow Professor of Economics at MIT.

The eighth speaker at the Macroeconomics Seminar this semester, Piketty presented his work and faced an array of questions about his assumptions and conclusions — which, in the longtime style of economics seminars, the audience freely tossed out in the middle of his remarks.

Piketty’s book contends that if the rate of return on accumulated capital significantly exceeds overall growth rates, it will lead to a greater concentration of wealth in the hands of those who already have significant assets. In that light, Piketty faced several queries about the varieties of capital and their relationship to growth.

One group of questions he faced related to the value of specifying the types of capital in question, with an eye to quantifying wealth-creation as precisely as possible. For instance, ever-scarcer land resources, one audience member noted, might appear more valuable over time, increasing the apparent value of that form of capital, even though the amount of production yielded by that land might not increase.

On a related note, other audience members queried whether Piketty’s general separation of the rate of return on capital, on the one hand, and growth, on the other, might preclude a more detailed analysis of the interactions between the two things.

On the former count, Piketty said he and his colleagues were continuing to study such price effects, but that they were accompanied by real capital accumulations; to the second point, he acknowledged that it is true that the rate of return and growth are intertwined, but stated that over time, globally, large-scale data show that they also diverge significantly. “I think it’s useful to look at aggregate data, [although] of course we recognize the limits of that kind of thinking,” Piketty said.

Piketty also discussed his preferred policy solution to growing inequality: higher tax rates on the wealthy. Over the last few decades, as he emphasized, those rates have fallen in many countries. Engineering a sustained reversal of this trend would seem to be unlikely, but Piketty argued that since high rates were once instituted, they could, perhaps, become reality again.

“In 1900, most people were saying progressive taxation would never happen,” Piketty said. He added that “the U.S. is really the country that invented extreme tax progressivity,” asserting that Germany’s famously high postwar income tax regime was a product of the American reconstruction of the country.

Piketty has longstanding MIT ties: He was an assistant professor at the Institute from 1993 to 1995, and returned as a visiting professor in the 2000-2001 academic year. He has also co-authored articles with multiple MIT scholars.

His talk drew an audience of more than 100, including MIT faculty and students, scholars from other local universities, the consul general from the French consulate in Boston, and the translator of “Capital in the 21st Century,” Arthur Goldhammer, of Harvard University’s Center for European Studies.

Commenting on the book’s unexpected popularity, Goldhammer, an MIT alumnus who has become a leading translator of French academic works, suggested to MIT News that “the theme of inequality seems to resonate with widespread concerns about what has become of American society in recent years.”

Werning told MIT News that it was “fun and interesting to have Thomas over at MIT,” adding that Piketty “has written a very provocative book that will motivate a lot of follow-up research, as well as policy discussions, so it is important to have … research- oriented discussions” of the work.