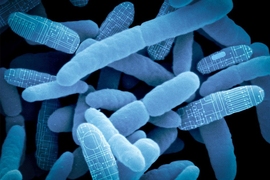 An MIT spinout, Synlogic, is aiming to create a new class of medicines, by re-programming bacteria found in the gut as “living therapeutics.”

Based on research by its co-founders, MIT professors Tim Lu and Jim Collins, Synlogic creates so-called synthetic biotics, which sense and correct metabolic abnormalities that underlie some major diseases and rare genetic disorders.

Human intestines are filled with trillions of bacteria, collectively called the microbiota, that carry out vital health functions. Synlogic’s synthetic biotics — capsules, liquid suspensions, or other dosage forms that can be taken regularly — augment the microbiota with new metabolic capabilities or complement lost functionality in organs such as the liver.

“Over the past decade or so, the intricate connections between microbes and our bodies have become clearer and clearer, and it’s well known now that the bacteria that live in our gut have a major influence on human health,” says Lu, an associate professor of electrical engineering and computer science and of biological engineering, and head of MIT’s Synthetic Biology Group, who serves as scientific advisor for Synlogic. “We leverage that interface as a way of treating human disease.”

Last month, Synlogic raised an additional $40 million in venture capital and secured its first industry partnership with pharmaceutical giant AbbVie. For the partnership, Synlogic will collaborate with AbbVie to develop synthetic biotics for the potential treatment of inflammatory bowel disease, which may include probiotic microbes programmed to detect intestinal inflammation, and produce anti-inflammatory molecules or break down pro-inflammatory effectors.

Two of Synlogic’s main candidate drugs, expected to enter clinical trials during the next 12 months, treat rare genetic metabolic disorders. One drug candidate is for treating urea cycle disorder (UCD), which is caused by an enzyme deficiency that leads to a buildup of toxic ammonia in the blood. The other is for treating phenylketonuria (PKU), which involves a dangerous excess of the amino acid phenylalanine due to a mutation in another metabolic enzyme. In both cases, Synlogic’s drugs process and flush out the toxic metabolites from the body.

For more than a decade at Boston University and MIT, Collins and Lu (who is Collins’ former student) have been developing “genetic circuits” for bacteria, which include on/off switches made with synthetic DNA or RNA sequences that instruct the bacteria to count, store memory, and even perform logic.

Collins and Lu have used these genetic circuits to program bacteria to seek and cure infection. In 2011, this approach earned Collins funding from the Bill and Melinda Gates Foundation to engineer bacteria to detect cholera and produce targeted antimicrobial peptides to treat it.

A few years ago, Lu and Collins, along with several venture capitalists, launched Synlogic to focus on commercializing “a new class of therapeutics based on living cells,” Collins says. In 2014, Synlogic came out of stealth mode, securing $30 million in funding from venture firms and the Gates Foundation.

Since then, Synlogic has worked primarily on programming E. coli Nissle, a strain of bacteria derived from the gut that is also used widely and safely as a probiotic. The programmed E. coli Nissle, Lu says, provides greater precision, safety, and efficacy for disease treatment, compared with traditional methods.

For inflammatory bowel diseases such as Crohn’s disease and ulcerative colitis, for instance, current treatments include small-molecule drugs or antibodies with anti-inflammatory properties. But the challenge is getting the right dosage, Lu says. “If you apply too little, it’s not going to work. If you apply too much, you have a chance you may immunosuppress the patient and cause side effects,” he says.

Synlogic can “program microbes to detect inflammation and make anti-inflammation molecules at the site of inflammation, as well as produce molecules that positively impact immune system function,” Collins says.

Then there’s the more rare but debilitating urea cycle disorder, which affects 2,000 to 6,000 people in the United States and impairs their ability to processes ammonia. If ammonia builds up too much and reaches the brain, it can lead to brain damage, coma, and death. The best available treatment option for people with UCD today is a liver transplant.

Synlogic aims to treat UCD with a daily biotic that functions in a surprising way: “It can decrease the ammonia in the bloodstream, without even contacting the blood,” Lu says.

Synlogic’s biotic for PKU, which affects 13,000 people in the United States, functions in a similar way, to regulate the processing and extraction of phenylalanine. PKU patients must adhere to a lifelong, extremely low-protein diet that can result in serious developmental disorders, because they can’t eat normal foods that contain phenylalanine — including many meat, dairy, and seafood products. “If we can degrade phenylalanine with convenient administration of this probiotic, that will change the course of this disease,” Lu says.

Collins says Synlogic has potential to treat many other rare genetic metabolic disorders. But the recent AbbVie deal, he says, also “opens up possibilities of using these microbes to produce biologics or other small molecules to treat a range of conditions.” These include cardiovascular disease and autoimmune, oncology, and central nervous system disorders, which have been linked to metabolic dysregulation.

Part of the reason that probiotic treatments are not used for serious diseases is their lack of clinically validated efficacy. Synlogic, on the other hand, aims to overcome these efficacy issues with potent and precision-programmed synthetic biotics, Lu says.

For example, in engineering the safe and easily programmable E. coli Nissle, Synlogic engineers have designed the microbe to consume a massive amount of toxic metabolites. The E. coli Nissle strain that forms the basis of Synlogic’s UCD program, for instance, can consume orders of magnitude more ammonia than natural E. coli can, Lu says. “For this treatment to work for patients, you want the max performance you can squeeze out of any one of these biotics,” he says.

Based on their preclinical data, Synlogic’s treatments have the potential to reach “clinical levels” of efficacy not seen often in synthetic biology, says Collins: “Synlogic is programming these probiotic microbes to consume ammonia or phenylalanine for example, and they are reaching levels that are expected to be clinically meaningful, which is quite remarkable.”

Research from Synlogic, a biotech company founded by Profs James Collins and Timothy Lu, has found that it’s the company’s engineered bacteria could provide some benefit to patients with a rare genetic disease, reports Emily Mullin for Wired. “Similar to how you might program a computer, we can tinker with the DNA of bacteria and have them do things like produce a drug at the right time and the right place, or in this case, break down a toxic metabolite,” says Lu.

Guardian reporter Ian Sample writes that MIT startup Synlogic are developing a “living” medicine” made from genetically modified bugs. “By engineering these bacteria, we are able to control how they operate in the human gastrointestinal tract,” says Caroline Kurtz of Synlogic. “It allows us to think about many other diseases where you may need to produce something beneficial, or remove something that is toxic for the patient.”

In an article for The New York Times about how scientists are developing new ways to treat disease using bacteria, Carl Zimmer highlights how MIT startup Synlogic is developing what could be the first FDA-approved synthetic biology-based medical treatment for a disease called phenylketonuria.

Synlogic, founded by Prof. Jim Collins and Associate Prof. Tim Lu, is programming probiotic bacteria to treat certain genetic or acquired metabolic disease, reports Robin Seaton Jefferson for Forbes. One product is used for people whose bodies can’t maintain a healthy level of ammonia and “has been specifically engineered to convert the excess ammonia to a harmless metabolite,” explains Seaton Jefferson.

Prof. Timothy Lu speaks with STAT reporter Eric Boodman about his work trying to harness bacteria to treat disease. Lu notes that his lab is also currently working on, “building these genetic circuits for therapeutic applications, but instead of targeting bacteria, we’ve been focused on using human cells.”

Huffington Post reporter Carolyn Gregoire writes that MIT spinoff Synlogic is working on reprogramming gut bacteria to act as a living therapeutic. “It’s become really clear that the bacteria living in us and on us affect our bodies in a variety of different ways — in ways that we never imagined,” explains Prof. Timothy Lu.