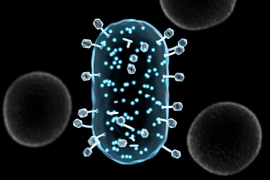 Ever wonder why fruits and vegetables sometimes hit the shelves contaminated by pathogenic bacteria such as listeria, E. coli, and salmonella?

According to Tim Lu, an assistant professor of electrical engineering and biological engineering at MIT, it boils down to the inefficient bacteria-detection assays used in the food industry. In some cases, these aren’t accurate or speedy enough — sometimes taking several days to catch contaminated produce.

But now Lu’s startup, Sample6, is commercializing an advanced assay platform that “lights up” pathogenic bacteria for quick detection, with the ability to detect only a few bacteria.

Based on Lu’s graduate school research at MIT, the assay uses biological particles called bacteriophages, or phages, which  only target bacteria. In Sample6’s case the assay is engineered to inject pathogenic bacteria — specifically, listeria — with an enzyme that reprograms the bacteria to shine very brightly.

To use the commercial assay, called the Bioillumination Platform, factory workers simply swab samples with a sponge, wait for the phages to do their work, and run the sample through a machine that detects any light emitted. Results can be plugged into the company’s software, which tracks contaminated products and can provide analytics on whether contamination correlates with certain days, people, or suppliers.

The aim is to mitigate the millions of illnesses caused each year by contaminated food in the United States, along with costly recalls for food producers. But the assay’s simplicity should also promote better sanitation practices, Lu says.

“If you can catch something before the end of the day, before you ship it out, and if you can sample more all around, you can be more proactive about sanitation and cut down on losses,” says Lu, who serves on Sample6’s board of directors.

Numerous clients have been using the Bioillumination Platform in trials over the past six months. It is currently undergoing certification, to be followed by wider release.

According to Lu, the assay’s innovation comes from its improvement upon three key aspects of bacterial detection: specificity, sensitivity, and rapidity. Other methods — such as immunoassays, cultures, or polymerase chain reactions (PCR, which copies DNA) — may be efficient in one area, but lacking in the other two.

Sample6’s specificity comes from its use of phages, which have specific pathogenic targets: Phages that attack listeria, for instance, won’t attack E. coli. To this end, they can also discriminate between pathogenic bacteria and the potentially thousands of innocuous bacteria nearby.

To achieve better sensitivity, Lu says, the company modifies the production of the bioilluminating enzyme, injected by the phage into the pathogen, to cause the bacteria to shine very brightly, even if only a handful of cells are present.

With this increased specificity and sensitivity, the assay skips the amplification, or culturing, step required in other methods, making it, according to Sample6, the world’s first “enrichment-free pathogen diagnostic system.”

For instance, if one strain of a pathogen needs identification, “producers usually grow the bacteria out to large numbers before they can detect it,” Lu says. “This is slow, and obviously not ideal for the food industry.”

All these improvements contribute to the assay’s speed, Lu says. “Basically, we’re producing enough signal to detect a few specific cells quickly, which gets you really rapid sensors,” he says.

The assay is used today strictly for detection of bacteria. But it started as a potential therapeutic, when Lu was an MD/PhD student in the MIT-Harvard Health Sciences and Technology program in the mid-2000s.

In a lab at Boston University, Lu engineered phages that could break apart antibiotic-resistant biofilms — coatings where bacteria live and thrive — by injecting bacteria with certain enzymes to make the biofilms self-destruct.

Seeing phages as better antimicrobial treatments than antibiotics — to which biofilms and bacteria can build immunity — Lu, Sample6 co-founder and now vice president of operations Michael Koeris, and other colleagues bootstrapped to commercialize the technology. They funded their company, then called Novophage, through university business-plan competitions across the country, and outfitted nearly an entire lab with reused equipment from MIT and auctions.

Faced with the financial crisis and challenges in commercializing therapeutics, they pivoted to diagnostics. They shopped their phages to bacteria-plagued industries — such as oil and water treatment, where biofilms build up in pipelines — before seeing firsthand that the food industry “was in desperate need of new detection technologies.”

Most food manufacturers were still using traditional assays, Lu says, with some still using pen and paper or spreadsheets to track contamination — “which makes it nearly impossible to gather large amounts of data,” he says.

In an incubator at the University of Massachusetts at Boston, the renamed Sample6 tailored the product for the food industry before relocating to its current headquarters in Boston’s Seaport District, where a 15-person team now works on research and development and small-scale manufacturing. After leading the startup through technological implementation, Lu took a position in 2012 on its board, where he continues advising.

Today, Sample6’s assay detects listeria and is used solely by the food industry. But it’s a platform technology, Lu says, that can be used to detect other pathogenic bacteria, such as E. coli and salmonella, and for other means across other industries.

“Phages are the most abundant biological particle on Earth. Since they have coevolved with bacteria for eons, nature provides a rich database of phages which target desired bacteria. Thus, by sourcing from nature, we can adapt the platform to other pathogens and applications,” he says.

The phages could be modified, for instance, to break apart the biofilms that build up and corrode oil pipelines, or to detect the pathogenic bacteria that sometimes cause oil to sour by changing its composition.

The next practical application, however, is most likely in health care, with the potential for clinical diagnostics or rapid detection of contamination in hospital rooms — with the aim of decreasing the 1.7 million cases of hospital-associated infections recorded in the United States each year.

With the assay, Lu says Sample6 hopes to bring synthetic biology, and specifically phages, to microbial detection across many fields. Further down the road, he says, a goal is to transform diagnostics into something more accessible to the public — perhaps even leading to at-home diagnostics.

“Fundamentally, I see this assay as an enabler for many more applications. We want ultimately to democratize the use of synthetic biology in the real world,” he says.

MIT spinoff Sample6 has raised $12.7 million to create a better system for detecting bacteria in food, writes Luke Timmerman for Forbes. “The company has developed a technology that can target specific bioparticles, light them up and do it without enriching the sample,” explains Timmerman.