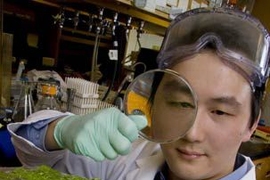 Today, the 27-year-old M.D. candidate and Ph.D. in the Harvard-MIT Division of Health Sciences and Technology received the prestigious $30,000 Lemelson-MIT Student Prize for inventing processes that promise to combat bacterial infections by enhancing the effectiveness of antibiotics at killing bacteria and helping to eradicate biofilm - bacterial layers that resist antimicrobial treatment and breed on surfaces, such as those of medical, industrial and food processing equipment.

Bacterial infections can lead to severe health issues. The Centers for Disease Control and Prevention estimates that the antibiotic-resistant bacterium MRSA, or methicillin-resistant Staphylococcus aureus, causes approximately 94,000 infections and contributes to 19,000 deaths annually in the United States, through contact that can occur in a variety of locations, including schools, hospitals and homes. Bacteria can also infect food, including spinach and beef, and damage industrial equipment.

Lu explained that fewer pharmaceutical companies are inventing new antibiotics due to long development times, high failure rates and large costs. According to the Tufts Center for the Study of Drug Development, the cost to develop a new drug is $930 million (based on the value of the dollar in 2006). These factors, coupled with a decline in the number of prescriptions authorized for antibiotics, constrain profits. "Antibiotic-resistant bacteria are also becoming more prevalent," Lu noted. "My inventions enable the rapid design and production of inexpensive antibacterial agents that can break through the defenses of antibiotic-resistant bacteria and bacterial biofilms."

Working with his advisor, J.J. Collins, professor of biomedical engineering at Boston University, Lu developed two bacteriophage platforms to overcome antibiotic resistance. Bacteriophage are viruses that only infect bacteria, not human cells. They have been used since the early 20th century to treat bacterial infections; however, they fell out of favor in the United States due to the advent of antibiotics. Lu's work represents an exciting application of synthetic biology, which is an emerging field focused on the rational engineering of organisms to achieve novel functions.

"While working at a hospital as part of a graduate course, I saw many patients who contracted new infections due to already-compromised immune systems or equipment that is extremely difficult to keep sterile," Lu recalled. "Being infected by difficult-to-eradicate bacteria is a traumatic experience for patients and a serious public health issue that needs attention. I thought that there had to be a solution for these infections."

Lu also applied his work with bacteriophage to create a new technique for reducing harmful biofilms, which are slimy layers of bacteria that develop on the surfaces of medical, industrial and food processing equipment and are difficult to penetrate and remove. Current treatment methods to penetrate biofilms can involve peptides or enzymes, which must be administered systemically and are costly. Medical devices infected by biofilms, such as replacement hip joints or pacemakers, often have to be removed surgically.

"As a physician who has treated patients with resistant bacterial infections, I am well aware of the devastating effect they have on morbidity and mortality," added Collin M. Stultz, associate professor of biomedical engineering in the Harvard-MIT Division of Health Sciences and Technology, and one of Lu's recommenders for the award. "Tim has developed a series of methods that can be used to treat such problematic infections."

In tests, Lu's platform proved greater than 99.997 percent effective at destroying biofilms - a significant improvement over current treatment options. "The ultimate goal is to develop a sustainable source of antibacterial therapies that are effective and easy to produce at low cost, and will last us through the 21st century," said Lu.

According to Lu, his engineered enzymatically-active bacteriophage could be initially applied in food processing settings to kill food-borne bacteria, such as Escherichia coli (E. coli) that contaminate spinach and cause severe illness when ingested. In line with these hopes, there is evidence that U.S. regulatory authorities are warming up to the therapeutic use of bacteriophage. For example, in 2006, the U.S. Food and Drug Administration approved the first U.S. treatment for Listeria contamination of processed meats using natural bacteriophage.

Lu added that enzymatically-active bacteriophage could also benefit industry by being used to treat infected pipes and reduce corrosion.

Born in Stanford, California, and raised in Yorktown Heights, New York, and Taiwan, Lu credits his inventiveness to his father, Nicky, an engineer and entrepreneur who helped develop modern semiconductor memories with IBM and the integrated circuits industry in Taiwan. Lu recalls spending time at his father's office during his formative years, where he reviewed plans and designs for new integrated circuits.

"I inherited my interest in invention and entrepreneurship from my father," Lu said. "It was very inspiring to see the amount of effort my father and his team put into their work and their joy and elation when they achieved success."

"Tim is one of the young stars in the emerging field of synthetic biology" said his advisor Collins. "I am confident he will develop into a leading clinical investigator and innovator."

"Tim demonstrates the type of ambitious and inventive thinking the $30,000 Lemelson-MIT Student Prize was established to recognize," said Josh Schuler, executive director of the Lemelson-MIT Program, which provides the annual award. "What is truly impressive about Tim's approaches is the breadth of his applications. Not only does his work have potential in healthcare, but also in protecting the general public through safer food processing and prevention of industrial biofouling. Harmful bacteria everywhere should be afraid."

Second Year of National Student Prize Expansion
On February 28, the winners of the second annual $30,000 Lemelson-Illinois Student Prize and Lemelson-Rensselaer Student Prize will be announced at the University of Illinois at Urbana-Champaign and Rensselaer Polytechnic Institute, respectively. Details about each winner will be posted on www.30kprize.uiuc.edu and www.rpi.edu/lemelson.

About the $30,000 Lemelson-MIT Student Prize

The $30,000 Lemelson-MIT Student Prize is awarded annually to an MIT senior or graduate student who has created or improved a product or process, applied a technology in a new way, redesigned a system, or demonstrated remarkable inventiveness in other ways. A distinguished panel of MIT alumni and associates including scientists, technologists, engineers and entrepreneurs chooses the winner.

About the Lemelson-MIT Program

Jerome H. Lemelson, one of U.S. history's most prolific inventors, and his wife Dorothy founded the Lemelson-MIT Program at the Massachusetts Institute of Technology in 1994. It is funded by the Lemelson Foundation, a philanthropy that celebrates and supports inventors and entrepreneurs in order to strengthen social and economic life in the U.S. and developing countries. More information on the Lemelson-MIT Program is online at web.mit.edu/invent.

A version of this article appeared in MIT Tech Talk on March 5, 2008 (download PDF).