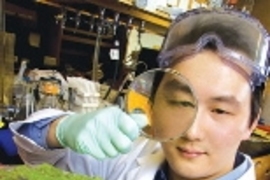 A new approach to fighting bacterial infections, developed at MIT and Boston University, could help prevent bacteria from developing antibiotic resistance and help kill those that have already become resistant.

Researchers from both schools have engineered a virus that knocks out bacterial defense systems, enhancing the effectiveness of antibiotics. The work is reported in the March 2 online issue of the Proceedings of the National Academy of Sciences.

Antibiotic-resistant bacteria pose a serious and growing health risk. The Centers for Disease Control and Prevention estimates that the antibiotic-resistant bacterium MRSA, or methicillin-resistant Staphylococcus aureus, causes approximately 94,000 infections and contributes to 19,000 deaths annually in the United States, through contact that can occur in a variety of locations, including schools, hospitals and homes.

New drugs are needed to combat these superbugs, but very few new antibiotics have been developed in the past few decades. "There are a lot of targets to go after, but people haven't been able to find the drugs," said Timothy Lu, lead author of the paper and an MD candidate in the Harvard-MIT Division of Health Sciences and Technology (HST).

Lu, who completed his PhD at HST last year, won the $30,000 Lemelson-MIT Student Prize and the grand prize in the National Collegiate Inventors Competition in 2008 for his work with engineered bacteriophages.

The engineered viruses described in the PNAS paper attack the SOS system, a bacterial DNA repair system enlisted when bacteria are exposed to antibiotics that damage DNA, and other gene networks. Used in conjunction with traditional antibiotics, the viruses undermine bacterial defense systems and prevent resistance from developing.

"This work lays the groundwork for the development of a library of bacteriophages, each designed to attack different bacterial targets," said Lu.

In 2007, Lu and Collins demonstrated the successful creation of an engineered virus that could attack and destroy surface "biofilms" of harmful bacteria that can form on industrial and medical devices. Such viruses could be used in food processing plants, hospitals or other settings where dangerous bacteria can accumulate.

This work was funded by the National Institutes of Health and the Howard Hughes Medical Institute.

The researchers have launched a start-up company, Novophage, to develop the engineered viruses, and are participating in several business plan competitions nationwide, including the MIT $100K Entrepreneurship Competition, the BU $50K Business Plan Competition, and the Harvard Business School Business Plan Contest.