A new approach to chemical synthesis 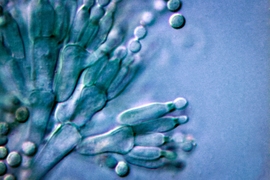 ↓ Download Image
Caption: A research team led by MIT chemistry professor Mohammad Movassaghi has developed a strategy for synthesizing a group of compounds called communesins, which occur naturally in some fungi. Researchers may now be able to further investigate the compounds’ cancer-fighting abilities. Pictured is an image of penicillium fungus.

Caption:
A research team led by MIT chemistry professor Mohammad Movassaghi has developed a strategy for synthesizing a group of compounds called communesins, which occur naturally in some fungi. Researchers may now be able to further investigate the compounds’ cancer-fighting abilities. Pictured is an image of penicillium fungus.

MIT chemists have devised a new way to synthesize a complex molecular structure that is shared by a group of fungal compounds with potential as anticancer agents. Known as communesins, these compounds have shown particular promise against leukemia cells but may be able to kill other cancer cells as well.

The new synthesis strategy, described in the Journal of the American Chemical Society, should enable researchers to generate large enough quantities of these compounds to run more tests of their anticancer activity. It should also allow scientists to produce designed variants of the naturally occurring communesins, which may be even more potent.

“This is just the foundation,” says Mohammad Movassaghi, an MIT professor of chemistry and the paper’s senior author. “We’ve laid the foundation for implementation of this strategy to access other variations, both natural and nonnatural.”

Communesins are a unique family of polycyclic and complex naturally occurring alkaloids. One of the major hurdles to synthesizing communesins in the lab using this new strategy is a chemical reaction in which two large, bulky molecules must be joined together in a step known as heterodimerization.

Movassaghi’s lab, which has been working on this type of synthesis for several years, was inspired by the way related compounds are produced in nature. The details of the natural synthesis are not fully known, but it is believed that it also involves a heterodimerization step. In fungi, there is evidence that an enzyme catalyzes this reaction.

Without an enzyme, the heterodimerization required to produce communesins is difficult to carry out because it requires forming a bond between two carbon atoms that are each already bonded to four other atoms, some of which have additional bulky groups attached to them. This makes it challenging to bring the two molecules close enough for them to fuse together.

To overcome this, Movassaghi’s lab developed an approach in which they transform the two carbon atoms into carbon radicals (carbon atoms with one unpaired electron). To create these radicals, the researchers first attach each of the targeted carbon atoms to a nitrogen atom, and these two nitrogen atoms bind to each other.

When the researchers shine certain wavelengths of light on the reactants, it causes the two atoms of nitrogen to break away as nitrogen gas, leaving behind two very reactive carbon radicals that join together almost immediately.

“If you break the carbon-nitrogen bond, the intermediate has a very short lifetime. We predict it to be roughly on the order of picoseconds,” Movassaghi says. “Dinitrogen pops out and now you have two radicals in very close proximity.”

Once the heterodimer is formed, three more chemical steps are required, including the transfer of a nitrogen-containing chemical group from one carbon atom to another.

“Just heterodimerizing is only half the battle,” Movassaghi says. “There were two major challenges in this successful synthesis. One was how do you get to a heterodimer, and once you fuse the two halves together, how do you guide the rearrangement to match the structure that you find in nature?”

In this study, the MIT team prepared a key precursor that was converted to the compound known as communesin F in only five steps. The critical heterodimer rearrangement step proceeded to yield 82 percent of the desired heptacyclic communesin structure.

Scott Miller, a professor of chemistry at Yale University, describes the new approach as “a masterful synthesis.”

“The strategy is incredibly ambitious and reflects a sophisticated assessment of the plausible biosynthetic precursor. This is really very clever, since these pathways are typically not known at the level of complete understanding, so outstanding intuition and creativity are required,” says Miller, who was not involved in the research.

This strategy can also be used to produce related communesins, including variants not found in nature.

“Nature has likely evolved these compounds for chemical defense or signaling between different organisms, but if we’re thinking about their potential for treatment of human disease, we may need to access nonnatural derivatives,” Movassaghi says. “Our ability to go in with pinpoint accuracy and make structural variations to these complex alkaloids is going to be helpful in enabling the thorough evaluation of these compounds and related derivatives.”

The study was conducted by graduate student Matthew Pompeo and former postdocs Stephen Lathrop and Wen-Tau Chang. The project was funded by the National Institutes of Health and the National Science Foundation.

From sponges, a potential cancer drug