From sponges, a potential cancer drug 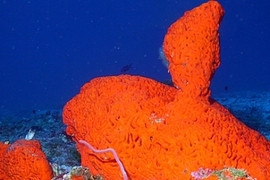 Caption:
The chemical makeup of agelastatin A.
Credits:
Image: Mohammad Movassaghi
Deep in the ocean, sponges of the Agelas family, or bacteria living within the sponges, emit chemicals believed to help them defend their territory. Those chemicals, called agelastatins, have also shown the ability to kill cancer cells. For that reason, chemists have been trying to find ways to synthesize agelastatins in the laboratory since the chemicals were discovered in 1993.

Chemists at MIT, led by Associate Professor Mohammad Movassaghi, recently discovered the shortest and most productive way to synthesize all six of the known agelastatins. The team, which also includes graduate students Dustin Siegel and Sunkyu Han, described the new method in the Aug. 16 online edition of the journal Chemical Science.

“Movassaghi's very elegant synthesis demonstrates a nicely scalable, multi-gram preparation of all the known agelastatins,” says Tadeusz Molinski, the chemist who first isolated agelastatins C and D, the third and fourth agelastatins discovered, in 1998. Molinski, a professor of chemistry at the University of California at San Diego, says the new synthesis will allow researchers to produce enough of the compounds to test them as cancer drugs.

Agelastatins have been shown to inhibit cancer-cell proliferation by interfering with cell division. They also repress an enzyme known as glycogen synthase kinase-3, a potential target for treating Alzheimer’s disease and bipolar disorder.

“They have a very broad range of biological activity,” says Movassaghi. “The sponges are not interested in treating cancer or Alzheimer’s, but the agelastatins are potently active against them.”

Scientists speculate that sponges, or bacteria that live in symbiosis with them, release agelastatins into their watery environment to warn other sponge species not to colonize the area.

Agelas sponges, which have been found in the Coral Sea and Indian Ocean, are difficult to obtain, so researchers have had trouble generating enough agelastatin to do large-scale experiments in cancer cells. Since they were first discovered, chemists have reported about a dozen ways to produce one or more of the compounds, but none of the chemists have been able to produce all six. The MIT team can do so, and in relatively large quantities — a gram per reaction batch.

In designing their synthesis, Movassaghi, Siegel and Han tried to mimic the way they believe the sponges naturally produce agelastatins.

Each agelastatin contains four rings, known as A, B, C and D, and most chemists have used syntheses in which the C ring forms before the B ring. The MIT team formed the B ring first, and the C ring last. The C ring is the only ring made solely of carbon atoms (all of the others contain at least one nitrogen atom), and it is where all four of the molecule’s stereocenters are found. (Stereocenters are atoms around which the molecule can take different three-dimensional orientations.)

Other chemists had theorized that the biological synthesis of agelastatins would use precursors with an electron-deficient carbon atom in the fourth carbon position and a carbon atom that wants to share its electrons in the eighth position. Movassaghi switched those features.

To show whether sponges do the same series of steps, more experiments are needed. Researchers could label the precursors with isotope tags, give them to the sponges and follow where the isotopic labels end up. Although some of the steps of Movassaghi’s synthesis require high temperatures or acidic conditions, those same reactions could occur under biological conditions if catalyzed by enzymes.

Movassaghi’s lab is now collaborating with researchers in academia and industry to test the biological activity of the compounds, with an emphasis on their anti-cancer activity. Using the new synthesis, the researchers should be able to easily produce variants not found in nature that might have even more powerful effects, says Movassaghi. The synthesis should also provide a good starting point for possible future large-scale production, should there be a need, he says.