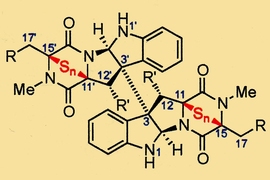 ↓ Download Image
Caption: MIT chemists designed many variants of epipolythiodiketopiperazine (ETP) alkaloids and tested them for anticancer activity. A representative ETP structure is shown.
Credits: Graphic courtesy of the researchers

Caption:
MIT chemists designed many variants of epipolythiodiketopiperazine (ETP) alkaloids and tested them for anticancer activity. A representative ETP structure is shown.
Credits:
Graphic courtesy of the researchers
Inspired by a chemical that fungi secrete to defend their territory, MIT chemists have synthesized and tested several dozen compounds that may hold promise as potential cancer drugs.

A few years ago, MIT researchers led by associate professor of chemistry Mohammad Movassaghi became the first to chemically synthesize 11,11’-dideoxyverticillin, a highly complex fungal compound that has shown anti-cancer activity in previous studies. This and related compounds naturally occur in such small amounts that it has been difficult to do a comprehensive study of the relationship between the compound’s structure and its activity — research that could aid drug development, Movassaghi says.

“There’s a lot of data out there, very exciting data, but one thing we were interested in doing is taking a large panel of these compounds, and for the first time, evaluating them in a uniform manner,” Movassaghi says.

In the new study, recently published online in the journal Chemical Science, Movassaghi and colleagues at MIT and the University of Illinois at Urbana-Champaign (UIUC) designed and tested 60 compounds for their ability to kill human cancer cells.

“What was particularly exciting to us was to see, across various cancer cell lines, that some of them are quite potent,” Movassaghi says.

Many of the compounds tested in this study, known as epipolythiodiketopiperazine (ETP) alkaloids, are naturally produced by fungi. Scientists believe these compounds help fungi prevent other organisms from encroaching on their territory.

In the process of synthesizing ETP natural products in their lab, the MIT researchers produced many similar compounds that they suspected might also have anti-cancer activity. For the new study, they created even more compounds by systematically varying the natural structures — adding or removing certain chemical groups from different locations.

The researchers tested 60 compounds against two different human cancer cell lines — cervical cancer and lymphoma. Then they chose the best 25 to test against three additional lines, from lung, kidney and breast tumors. Overall, dimeric compounds — those with two ETP molecules joined together — appeared to be more effective at killing cancer cells than single molecules (known as monomers).

The structure of an ETP natural product typically has at least one set of fused rings containing one or more sulfur atoms that link to a six-member ring known as a cyclo-dipeptide. The researchers found that another key to tumor-killing ability is the arrangement and number of these sulfur atoms: Compounds with at least two sulfur atoms were the most effective, those with only one sulfur atom were less effective, and those without sulfur did not kill tumor cells efficiently.

Other rings typically have chemical groups of varying sizes attached in certain positions; a key position is that next to the ETP ring. The researchers found that the larger this group, the more powerful the compound was against cancer.

The compounds that kill cancer cells appear to be very selective, destroying them 1,000 times more effectively than they kill healthy blood cells.

The researchers also identified sections of the compounds that can be altered without discernably changing their activity. This is useful because it could allow chemists to use those points to attach the compounds to a delivery agent such as an antibody that would target them to cancer cells, without impairing their cancer-killing ability.

Larry Overman, a professor of chemistry at the University of California at Irvine, says the new study is an impressive advance. “Movassaghi and coworkers reveal for the first time a number of relationships between the chemical structure of molecules in the ETP series and their in-vitro anti-cancer activity,” says Overman, who was not part of the research team. “Knowledge of this type will be essential for the future development of ETP-type molecules into attractive clinical candidates and potential novel anti-cancer drugs.”

Now that they have some initial data, the researchers can use their findings to design additional compounds that might be even more effective. “We can go in with far greater precision and test the hypotheses we’re developing in terms of what portions of the molecules are most significant at retaining or enhancing biological activity,” Movassaghi says.

The research was funded by the National Institute of General Medical Sciences.