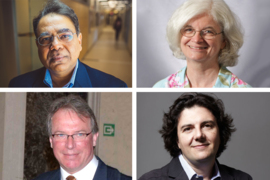 Four MIT faculty members have been elected to the National Academy of Sciences (NAS) in recognition of their “distinguished and continuing achievements in original research.”

The quartet of MIT professors was among 84 new members and 21 new foreign associates, from 14 countries, elected to the NAS. Membership in the NAS is one of the most significant honors given to academic researchers.

Chakraborty studies the human adaptive immune system, which mounts specific responses to diverse pathogens. The central focus of his lab is to understand the mechanistic underpinnings of this response and to harness this understanding to help design better vaccines and therapies.

Chakraborty, who earned his bachelor’s degree from the Indian Institute of Technology Kanpur in 1983 and a PhD from the University of Delaware in 1988, is also a member of the National Academy of Engineering. His many awards include a National Institutes of Health Director’s Pioneer Award, the E.O. Lawrence Memorial Award for Life Sciences, the Allan P. Colburn and Professional Progress Awards of the American Institute of Chemical Engineers, a Camille Dreyfus Teacher-Scholar Award, a Miller Research Professorship, and a National Young Investigator Award. He is also a fellow of the American Academy of Arts and Sciences and of the American Association for the Advancement of Science.

Nancy Lynch studies the theory of distributed computation. In recent years, her work has focused on questions about ad hoc networks — networks that are constantly adding and dropping members. How can you guarantee that a vital piece of information will reach every member of a network, if the shape of the network is always changing? How can you distribute data across a network so that you won’t lose information if any members drop out, but you won’t overwhelm members’ memory banks with unnecessary redundancy?

Lynch received her bachelor’s in mathematics from Brooklyn College in 1968 and her PhD in mathematics from MIT in 1972. She taught at Georgia Tech from 1976 to 1981, before joining the faculty at MIT, where she’s been for 35 years. She is a fellow of the Association for Computing Machinery (ACM) and a member of both the American Academy of Arts and Sciences and the National Academy of Engineering. Her many previous honors include Donald E. Knuth Prize for outstanding contributions to the foundations of computer science, jointly awarded by the ACM and IEEE, and two Edsger W. Dijkstra Prizes from the ACM for outstanding papers on the principles of distributed computing.

Ploegh’s Whitehead Institute lab, which he established in 2005, has focused on developing innovative tools and techniques with which to explore the complexities of the immune system and its response to antigens, including those from invading pathogens and cancer cells.

Prior to joining Whitehead, Ploegh taught at Harvard Medical School, where he led the immunology program. Before moving to Harvard, Ploegh was a professor of biology at MIT’s Center for Cancer Research (now the David H. Koch Institute for Integrative Cancer Research, of which he is now a member). Ploegh’s honors include a Meritorious Career Award from the American Association of Immunologists and a special National Institutes of Health Director's Pioneer Award in support of “high-risk, high-reward” research. Ploegh earned his bachelor’s degree from the University of Groningen in 1975 and a PhD from the University of Leiden in 1981.

A pioneer in the study of the key cellular regulatory metabolic pathway known as mTOR (for mechanistic target of rapamycin), Sabatini’s lab has been discerning the individual roles that mTOR’s protein components play in diseases such as cancer and diabetes as well as in the aging process.

Sabatini was appointed a Whitehead Fellow in 1997 after completing the MD/PhD program at Johns Hopkins University School of Medicine. In 2008, he became a professor of biology at MIT and an investigator of the Howard Hughes Medical Institute; he is also a member of the Koch Institute. Among Sabatini’s many honors are the Paul Marks Prize for Cancer Research and the National Academy of Sciences Award in Molecular Biology. He earned his bachelor’s degree from Brown University in 1990.

Larry Hardesty contributed to this article.