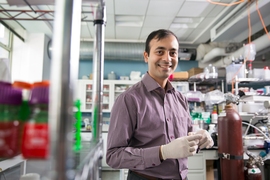 ↓ Download Image
Caption: “I try to guide my research by ... asking myself the question, ‘What can we do today that will have a lasting impact and be conducive to a sustainable human civilization?’” says Rohit Karnik, an associate professor in MIT’s Department of Mechanical Engineering. 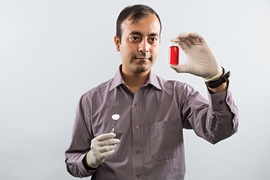 ↓ Download Image
Caption: “I try to guide my research by ... asking myself the question, ‘What can we do today that will have a lasting impact and be conducive to a sustainable human civilization?’” says Rohit Karnik, an associate professor in MIT’s Department of Mechanical Engineering.

Caption:
“I try to guide my research by ... asking myself the question, ‘What can we do today that will have a lasting impact and be conducive to a sustainable human civilization?’” says Rohit Karnik, an associate professor in MIT’s Department of Mechanical Engineering.
Credits:
Photo: Ken Richardson

In Rohit Karnik’s lab, researchers are searching for tiny solutions to some of the world’s biggest challenges.

In one of his many projects, Karnik, an associate professor in MIT’s Department of Mechanical Engineering, is developing a new microfluidic technology that can quickly and simply sorts cells from small samples of blood. The surface of a microfluidic channel is patterned to direct certain cells to roll toward a reservoir for further analysis, while allowing the rest of the blood sample to pass through. With this design, Karnik envisions developing portable, disposable devices that doctors may use, even in remote regions of the world, to quickly diagnose conditions ranging from malaria to sepsis.

Karnik’s group is also tackling issues of water purification. The researchers are designing filters from single layers of graphene, which are atom-thin sheets of carbon known for their exceptional strength. Karnik has devised a way to control the size and concentration of pores in graphene, and is tailoring single layers to filter out miniscule and otherwise evasive contaminants. The group has also successfully filtered salts using the technique and hopes to develop efficient graphene filters for water purification and other applications.

In looking for water-purifying solutions, Karnik’s group also identified a surprisingly low-tech option: the simple tree branch. Karnik found that the pores within a pine branch that normally help to transport water up the plant are ideal for filtering bacteria from water. The group has shown that a peeled pine branch can filter out up to 99.00 percent of E. coli from contaminated water. Karnik’s group is building up on this work to explore the potential for simple and affordable wood-based water purification systems.

“I try to guide my research by long-term sustainability, in a specific sense, by asking myself the question, ‘What can we do today that will have a lasting impact and be conducive to a sustainable human civilization?’ Karnik says. “I try to align myself with that goal.”

From stargazer to tinkerer

Karnik was born and raised in Pune, India, which was then a relatively quiet city 100 miles east of Mumbai. Karnik describes himself while growing up as shy, yet curious about the way the world worked. He would often set up simple experiments in his backyard, seeing, for instance, how transplanting ants from one colony to another would change the ants’ behavior. (The short answer: They fought, sometimes to the death.) He developed an interest in astronomy early on and often explored the night sky with a small telescope, from the roof of his family’s home.

“I used to take my telescope up to the terrace in the middle of the night, which required three different trips up six or seven flights of stairs,” Karnik says. “I’d set the alarm for 3 a.m., go up, and do quite a bit of stargazing.”

That telescope would soon serve another use, as Karnik eventually found that, by inverting it and adding another lens, he could repurpose the telescope as a microscope.

“I built a little setup so I could look at different things, and I used to collect stuff from around the house, like onion peels or fungus growing on trees, to look at their cells,” Karnik says.

When it came time to decide on a path of study, Karnik was inspired by his uncle, a mechanical engineer who built custom machines “that did all kinds of things, from making concrete bricks, to winding up springs,” Karnik says. “What I saw in mechanical engineering was the ability to building something that integrates across different disciplines.”

As an entering student at the Indian Institute of Technology Bombay, Karnik chose to study mechanical engineering over electrical engineering, which was the more popular choice among students at the time. For his thesis, he looked for new ways to model three-dimensional cracks in materials such as steel beams.

Casting around for a direction after graduating, Karnik landed on the fast-growing field of nanotechnology. Arun Majumdar, an IIT alum and professor at the University of California at Berkeley, was studying energy conversion and biosensing in nanoscale systems. Karnik joined the professor’s lab as a graduate student, moving to California in 2002. For his graduate work, Karnik helped to develop a microfluidic platform to rapidly mix the contents of and test reactions occurring within droplets. He followed this work up with a PhD thesis in which he explored how fluid, flowing through tiny, nanometer-sized channels, can be controlled  to sense and direct ions and molecules.

Toward the end of his graduate work, Karnik interviewed for and ultimately accepted a faculty position at MIT. However, he was still completing his PhD thesis at Berkeley and had less than 4 years of experience beyond his bachelor’s degree. To help ease the transition, MIT offered Karnik an interim postdoc position in the lab of Robert Langer, the David H. Koch Institute Professor and a member of the Koch Institute for Integrative Cancer Research.

When Karnik finally assumed his position as assistant professor of mechanical engineering in 2007, he experienced a tidal wave of deadlines, demands, and responsibilities — a common initiation for first-time faculty.

“By its nature the job is overwhelming,” Karnik says. “The trick is how to maintain balance and sanity and do the things you like, without being distracted by the busyness around you, in some sense.”

He says several things have helped him to handle and even do away with stress: walks, which he takes each day to work and around campus, as well as yoga and meditation.

“If you can see things the way they are, by clearing away the filters your mind puts in place, you can get a clear perspective, and there are a lot of insights that come through,” Karnik says.