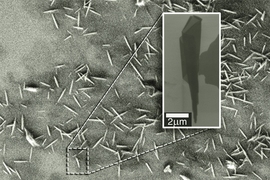 ↓ Download Image
Caption: An electron microscopy image shows many examples of nanoscrolls. The insert zooms in on a single nanoscroll and reveals its conical nature. 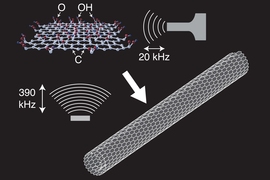 ↓ Download Image
Caption: This sketch illustrates how a nanoscroll forms from a graphene oxide flake as a result of ultrasonic irradiation.

Caption:
An electron microscopy image shows many examples of nanoscrolls. The insert zooms in on a single nanoscroll and reveals its conical nature.
Credits:
Courtesy of the researchers

Caption:
This sketch illustrates how a nanoscroll forms from a graphene oxide flake as a result of ultrasonic irradiation.
Credits:
Courtesy of the researchers

Water filters of the future may be made from billions of tiny, graphene-based nanoscrolls. Each scroll, made by rolling up a single, atom-thick layer of graphene, could be tailored to trap specific molecules and pollutants in its tightly wound folds. Billions of these scrolls, stacked layer by layer, may produce a lightweight, durable, and highly selective water purification membrane.

But there’s a catch: Graphene does not come cheap. The material’s exceptional mechanical and chemical properties are due to its very regular, hexagonal structure, which resembles microscopic chicken wire. Scientists take great pains in keeping graphene in its pure, unblemished form, using processes that are expensive and time-consuming, and that severely limit graphene’s practical uses.

Seeking an alternative, a team from MIT and Harvard University is looking to graphene oxide — graphene’s much cheaper, imperfect form. Graphene oxide is graphene that is also covered with oxygen and hydrogen groups. The material is essentially what graphene becomes if it’s left to sit out in open air. The team fabricated nanoscrolls made from graphene oxide flakes and was able to control the dimensions of each nanoscroll, using both low- and high-frequency ultrasonic techniques. The scrolls have mechanical properties that are similar to graphene, and they can be made at a fraction of the cost, the researchers say.

“If you really want to make an engineering structure, at this point it’s not practical to use graphene,” says Itai Stein, a graduate student in MIT’s Department of Mechanical Engineering. “Graphene oxide is two to four orders of magnitude cheaper, and with our technique, we can tune the dimensions of these architectures and open a window to industry.”

Stein says graphene oxide nanoscrolls could also be used as ultralight chemical sensors, drug delivery vehicles, and hydrogen storage platforms, in addition to water filters. Stein and Carlo Amadei, a graduate student at Harvard University, have published their results in the journal Nanoscale.

Getting away from crumpled graphene

The team’s paper originally grew out of an MIT class, 2.675 (Micro/Nano Engineering), taught by Rohit Karnik, associate professor of mechanical engineering. As part of their final project, Stein and Amadei teamed up to design nanoscrolls from graphene oxide. Amadei, as a member of Professor Chad Vecitis’ lab at Harvard University, had been working with graphene oxide for water purification applications, while Stein was experimenting with carbon nanotubes and other nanoscale architectures, as part of a group led by Brian Wardle, professor of aeronautics and astronautics at MIT.

“Our initial idea was to make nanoscrolls for molecular adsorption,” Amadei says. “Compared to carbon nanotubes, which are closed structures, nanoscrolls are open spirals, so you have all this surface area available to manipulate.”

“And you can tune the separation of a nanoscroll’s layers, and do all sorts of neat things with graphene oxide that you can’t really do with nanotubes and graphene itself,” Stein adds.

When they looked at what had been done previously in this field, the students found that scientists had successfully produced nanoscrolls from graphene, though with very complicated processes to keep the material pure. A few groups had tried doing the same with graphene oxide, but their attempts were literally deflated.

“What was out there in the literature was more like crumpled graphene,” Stein says. “You can’t really see the conical nature. It’s not really clear what was made.”

Stein and Amadei first used a common technique called the Hummers’ method to separate graphite flakes into individual layers of graphene oxide. They then placed the graphene oxide flakes in solution and stimulated the flakes to curl into scrolls, using two similar approaches: a low-frequency tip-sonicator, and a high-frequency custom reactor.

The tip-sonicator is a probe made of piezoelectric material that shakes at a low, 20Hz frequency when voltage is applied. When placed in a solution, the tip-sonicator produces sound waves that stir up the surroundings, creating bubbles in the solution.

Similarly, the group’s reactor contains a piezoelectric component that is connected to a circuit. As voltage is applied, the reactor shakes — at a higher, 390 Hz frequency compared with the tip-sonicator — creating bubbles in the solution within the reactor.

Stein and Amadei applied both techniques to solutions of graphene oxide flakes and observed similar effects: The bubbles that were created in solution eventually collapsed, releasing energy that caused the flakes to spontaneously curl into scrolls. The researchers found they could tune the dimensions of the scrolls by varying the treatment duration and the frequency of the ultrasonic waves. Higher frequencies and shorter treatments did not lead to significant damage of the graphene oxide flakes and produced larger scrolls, while low frequencies and longer treatment times tended to cleave flakes apart and create smaller scrolls.

While the group’s initial experiments turned a relatively low number of flakes — about 10 percent — into scrolls, Stein says both techniques may be optimized to produce higher yields. If they can be scaled up, he says the techniques can be compatible with existing industrial processes, particularly for water purification.

“If you can make this in large scales and it’s cheap, you could make huge bulk samples of filters and throw them out in the water to remove all sorts of contaminants,” Stein says.

This work was supported, in part, by the Department of Defense through the National Defense Science and Engineering Graduate (NDSEG) fellowship program.

System and Design Management program's industry and certificate director is honored for work in Covid-19 response.

Different social and racial groups have varying views of the problem’s urgency.

The company’s software, based on work by co-founder and Professor Ed Crawley, expedites the process of home energy accreditation.