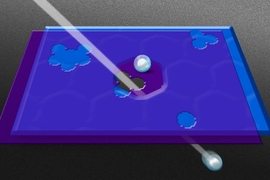 ↓ Download Image
Caption: Researchers created pores in a graphene sheet (in purple) and then placed it over a layer of silicon nitride (in blue) that had been punctured by an ion beam. This allows specific hydrated ions, which are surrounded by a shell of water molecules, to pass through.
Credits: Image: Jose-Luis Olivares/MIT

Caption:
Researchers created pores in a graphene sheet (in purple) and then placed it over a layer of silicon nitride (in blue) that had been punctured by an ion beam. This allows specific hydrated ions, which are surrounded by a shell of water molecules, to pass through.
Credits:
Image: Jose-Luis Olivares/MIT

The surface of a single cell contains hundreds of tiny pores, or ion channels, each of which is a portal for specific ions. Ion channels are typically about 1 nanometer wide; by maintaining the right balance of ions, they keep cells healthy and stable.

Now researchers at MIT have created tiny pores in single sheets of graphene that have an array of preferences and characteristics similar to those of ion channels in living cells.

Each graphene pore is less than 2 nanometers wide, making them among the smallest pores through which scientists have ever studied ion flow. Each is also uniquely selective, preferring to transport certain ions over others through the graphene layer.

“What we see is that there is a lot of diversity in the transport properties of these pores, which means there is a lot of potential to tailor these pores to different applications or selectivities,” says Rohit Karnik, an associate professor of mechanical engineering at MIT.

Karnik says graphene nanopores could be useful as sensors — for instance, detecting ions of mercury, potassium, or fluoride in solution. Such ion-selective membranes may also be useful in mining: In the future, it may be possible to make graphene nanopores capable of sifting out trace amounts of gold ions from other metal ions, like silver and aluminum.

In living cells, the diversity of ion channels may arise from the size and precise atomic arrangement of the channels, which are slightly smaller than the ions that flow through them.

“When nanopores get smaller than the hydrated size of the ion, then you start to see interesting behavior emerge,” Jain says.

In particular, hydrated ions, or ions in solution, are surrounded by a shell of water molecules that stick to the ion, depending on its electrical charge. Whether a hydrated ion can squeeze through a given ion channel depends on that channel’s size and configuration at the atomic scale.

Karnik reasoned that graphene would be a suitable material in which to create artificial ion channels: A sheet of graphene is an ultrathin lattice of carbon atoms that is one atom thick, so pores in graphene are defined at the atomic scale.

To create pores in graphene, the group used chemical vapor deposition, a process typically used to produce thin films. In graphene, the process naturally creates tiny defects. The researchers used the process to generate nanometer-sized pores in various sheets of graphene, which bore a resemblance to ultrathin Swiss cheese.

The researchers then isolated individual pores by placing each graphene sheet over a layer of silicon nitride that had been punctured by an ion beam, the diameter of which is slightly smaller than the spacing between graphene pores. The group reasoned that any ions flowing through the two-layer setup would have likely passed first through a single graphene pore, and then through the larger silicon nitride hole.

The group measured flows of five different salt ions through several graphene sheet setups by applying a voltage and measuring the current flowing through the pores. The current-voltage measurements varied widely from pore to pore, and from ion to ion, with some pores remaining stable, while others swung back and forth in conductance — an indication that the pores were diverse in their preferences for allowing certain ions through.

“The picture that emerges is that each pore is different and that the pores are dynamic,” Karnik says. “Each pore starts developing its own personality.”

Karnik and Jain then developed a model to interpret the measurements, and used it to translate the experiment’s measurements into estimates of pore size. Based on the model, they found that the diameter of many of the pores was below 1 nanometer, which — given the single-atom thickness of graphene  — makes them among the smallest pores through which scientists have studied ion flow.

With the model, the group calculated the effect of various factors on pore behavior, and found that the observed pore behavior was captured by three main characteristics: a pore’s size, its electrical charge, and the position of that charge along a pore’s length.

Knowing this, researchers may one day be able to tailor pores at the nanoscale to create ion-specific membranes for applications such as environmental sensing and trace metal mining.

“It’s kind of a new frontier in membrane technologies, and in understanding transport through these really small pores in ultrathin materials,” Karnik says.

Meni Wanunu, an assistant professor of physics at Northeastern University, says the group’s work with graphene membranes may significantly improve on commercial membranes used for water purification, which require large amounts of pressure to push water through.

“If these were replaced with graphene, since it is so thin, the pressure required to push water through would be among the lowest imaginable, if not the lowest,” says Wanunu, who was not involved in the research. “However, it is only through a fundamental understanding of ion transport that the overall anticipated behaviors of bulk graphene membranes can be drawn. The work here is fundamental, and will surely guide current and future graphene membrane design principles in years to come.”