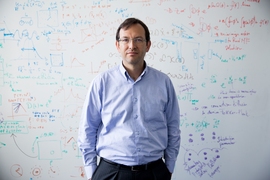 ↓ Download Image
Caption: “This place is remarkable,” Alfredo Alexander-Katz, the Walter Henry Gale Associate Professor of Materials Science and Engineering, says of MIT. “You can throw any crazy idea out there” and then pursue it. 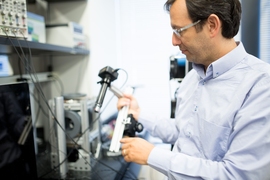 ↓ Download Image
Caption: “This place is remarkable,” Alfredo Alexander-Katz, the Walter Henry Gale Associate Professor of Materials Science and Engineering, says of MIT. “You can throw any crazy idea out there” and then pursue it.
Credits: Photo: Bryce Vickmark

Caption:
“This place is remarkable,” Alfredo Alexander-Katz, the Walter Henry Gale Associate Professor of Materials Science and Engineering, says of MIT. “You can throw any crazy idea out there” and then pursue it.
Credits:
Photo: Bryce Vickmark

Researchers have long studied the mechanism that causes blood to form clots in response to a wound, but new aspects came to light once MIT’s Alfredo Alexander-Katz began looking into the complex, dynamic process.

It turns out that when blood suddenly begins to flow more rapidly, as it does when tissue is cut, this disrupts a delicate balance between molecules that lead to clotting and others that prevent it. Clotting is thus a carefully choreographed mechanism that depends on both the hydrodynamics of the flow and the biochemistry of the molecules, and the interactions between the two.

This kind of discipline-straddling work has been a hallmark of Alexander-Katz’s research. Working at the interface between the physics of dynamical processes and the chemistry and biology of natural systems, he and his students keep finding entirely new phenomena, including some that occur in plain sight.

Observing nature and learning from it comes naturally to him. While growing up in the outskirts of Mexico City near a large national forest ironically called Desert of the Lions, Alexander-Katz was an outdoorsy and curious child, “climbing trees very happily, making arrows out of branches, trying to ski on the grass by being pulled by dogs,” he says. The family’s house was surrounded by a mix of other houses and farms, despite being within the boundaries of one of the world’s largest urban areas.

Alexander-Katz was initially drawn to physics, which was his major at the National Autonomous University of Mexico (UNAM). His mother is a lawyer, and his father — whose parents had emigrated from Germany just before World War II — is a professor of physics at UAM-I, another university in Mexico City.

Alexander-Katz’s undergraduate thesis project at UNAM focused on sonoluminescence — a phenomenon in which a rapidly collapsing bubble within a liquid triggers a burst of light. At the time, some people thought this might be a route toward room-temperature fusion, but there was not yet good documentation of what was really happening inside those tiny bubbles. “I was a theorist, working on models,” trying to predict what effects would be seen based on what material was inside the bubble, he recalls. But at the same time, he was also becoming very interested in research on biological phenomena.

He decided to go to the University of California at Santa Barbara for his doctorate, focusing on biophysics. But once there, his interests shifted again, and instead of studying biological materials as such, he began doing research on “soft, squishy matter, soft materials,” such as polymers. That’s also when a softer side of his personal life developed: “I met my wife Sofia in Santa Barbara, and we lived there together the last year of my graduate studies.”

Further pursuing that interest in soft matter, he moved to the Technical University in Munich for a postdoc position, and his wife, who is originally from Argentina and is now a practicing clinical psychologist, came along. “There, I went back into the biological side,” he says. “I started applying some of the techniques from polymer research to biological problems. It was really cool.” That’s also when he began to investigate blood clotting and how it depends on the dynamics of the moving fluid. This research led to his discovery that an increase in the rate of blood flow, something that usually disrupts chemical processes, is exactly what fosters the clotting reaction.

Alexander-Katz then moved on to another postdoc position, at the Ecole Superieure de Chimie et Physique in Paris, to join a group working on synthetic soft materials. “It was an exciting time,” he says, when a new kind of self-healing material was just being developed. This was also his introduction to a full laboratory experience where theorists and experimentalists were working together to tackle complex problems. “That influenced my views, realizing that even as a theorist, you could have your own lab and try to test things yourself.”

Then, in 2008, after sending out about 40 different applications for research positions, “I was only interviewed by MIT,” he says, and was quickly offered a faculty job. “It’s been a really fantastic ride since then.” That same year his first child, named Lucas, was born. He jokes that Lucas became his “tenure clock,” since his son’s age each year provided a reminder of how his progress toward tenure was moving along. Their second child, Felix, was born three years ago — and Alexander-Katz earned his tenure last year, becoming the Walter Henry Gale Associate Professor of Materials Science and Engineering.

In his work at MIT he has continued to find new insights about blood clotting and other biomechanical processes. He has also recently discovered a new kind of attraction between active (or living) particles, which he says might eventually lead to a better understanding of how some natural biological systems function, or might be used in some electronics or energy storage systems as a way of flipping the crystal state of a material without direct contact.

Another recent research project studied the mechanism that allows tiny particles of gold to penetrate through the outer membrane of cells without making holes. He found that by modifying the surfaces of these particles it is possible to fuse them with the cell membrane and even make them hop from membrane to membrane. The particles could thus become highly selective, targeted means of drug delivery. Alexander-Katz has also discovered a new way to produce tiny molecular “walkers” that could mimic biological processes, allowing microscopic beads of inanimate matter to travel in predictable ways over a surface in search of regions with particular characteristics, much as white blood cells travel around to find the site of an infection in the body. He speculates that such a process might ultimately be harnessed as a way of locating tumor cells, for example.

“This place is remarkable,” he says of MIT. “You can throw any crazy idea out there” and then pursue it. “I’ve had some wonderful collaborations here,” he says, taking advantage of the Institute’s famously porous divisions between disciplines to explore his ideas that bridge the fields of biochemistry and fluid dynamics, among others.

“I get to do what I always loved doing — working with students, coming up with new ideas, and thinking how to implement them,” he says. “It’s an endless source of joy here. Ten years ago, I would never have dreamed to be where I am now.”