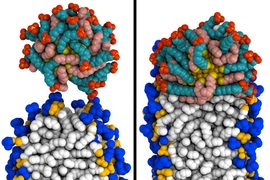 ↓ Download Image
Caption: MIT engineers created simulations of how a gold nanoparticle coated with special molecules can penetrate a membrane. At left, the particle (top) makes contact with the membrane. At right, it has fused to the membrane.
Credits: Image: Reid Van Lehn

Caption:
MIT engineers created simulations of how a gold nanoparticle coated with special molecules can penetrate a membrane. At left, the particle (top) makes contact with the membrane. At right, it has fused to the membrane.
Credits:
Image: Reid Van Lehn

A new study from MIT materials scientists reveals that these nanoparticles enter cells by taking advantage of a route normally used in vesicle-vesicle fusion, a crucial process that allows signal transmission between neurons. In the July 21 issue of Nature Communications, the researchers describe in detail the mechanism by which these nanoparticles are able to fuse with a membrane.

The findings suggest possible strategies for designing nanoparticles — made from gold or other materials — that could get into cells even more easily.

“We’ve identified a type of mechanism that might be more prevalent than is currently known,” says Reid Van Lehn, an MIT graduate student in materials science and engineering and one of the paper’s lead authors. “By identifying this pathway for the first time it also suggests not only how to engineer this particular class of nanoparticles, but that this pathway might be active in other systems as well.”

The paper’s other lead author is Maria Ricci of École Polytechnique Fédérale de Lausanne (EPFL) in Switzerland. The research team, led by Alfredo Alexander-Katz, an associate professor of materials science and engineering, and Francesco Stellacci from EPFL, also included scientists from the Carlos Besta Institute of Neurology in Italy and Durham University in the United Kingdom.

Most nanoparticles enter cells through endocytosis, a process that traps the particles in intracellular compartments, which can damage the cell membrane and cause cell contents to leak out. However, in 2008, Stellacci, who was then at MIT, and Darrell Irvine, a professor of materials science and engineering and of biological engineering, found that a special class of gold nanoparticles coated with a mix of molecules could enter cells without any disruption.

Last year, Alexander-Katz, Van Lehn, Stellacci, and others discovered that the particles were somehow fusing with cell membranes and being absorbed into the cells. In their new study, they created detailed atomistic simulations to model how this happens, and performed experiments that confirmed the model’s predictions. 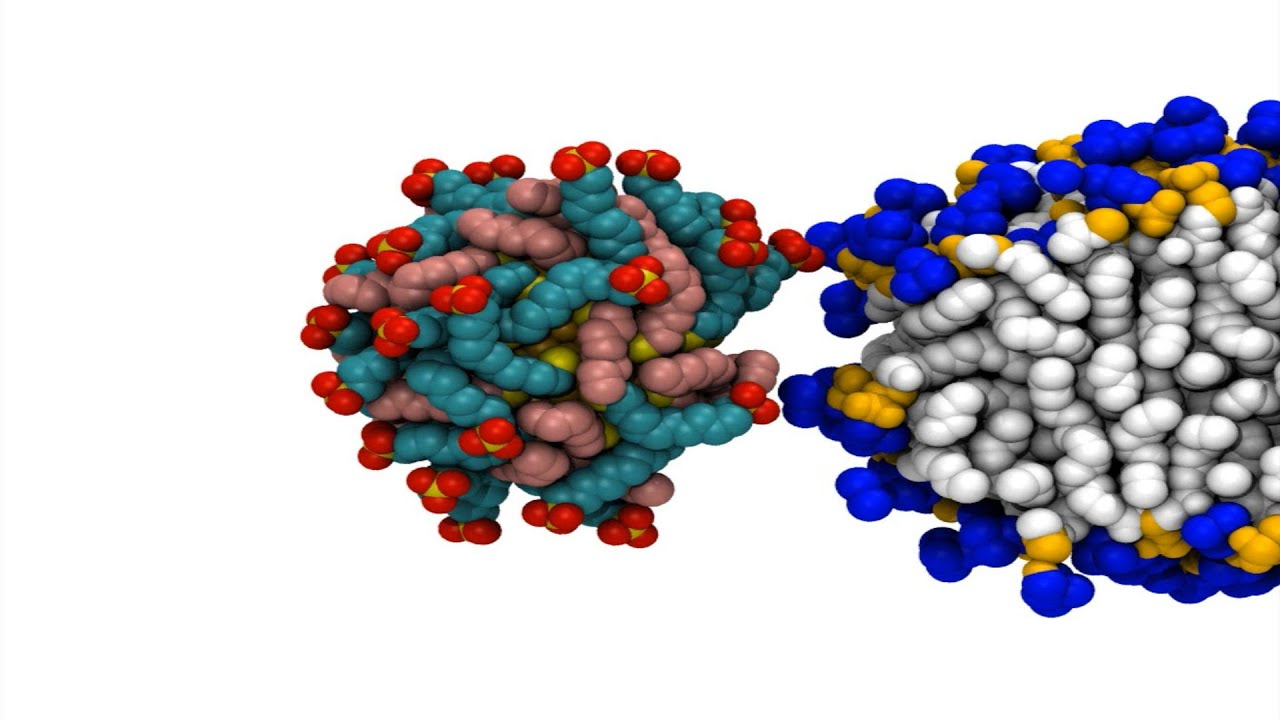 Gold nanoparticles used for drug delivery are usually coated with a thin layer of molecules that help tune their chemical properties. Some of these molecules, or ligands, are negatively charged and hydrophilic, while the rest are hydrophobic. The researchers found that the particles’ ability to enter cells depends on interactions between hydrophobic ligands and lipids found in the cell membrane.

However, if the model membrane includes a “defect” — an opening through which lipid tails can slip out — nanoparticles begin to enter the membrane. When these lipid protrusions occur, the lipids and particles cling to each other because they are both hydrophobic, and the particles are engulfed by the membrane without damaging it.

In real cell membranes, these protrusions occur randomly, especially near sites where proteins are embedded in the membrane. They also occur more often in curved sections of membrane, because it’s harder for the hydrophilic heads to fully cover a curved area than a flat one, leaving gaps for the lipid tails to protrude.

“It’s a packing problem,” Alexander-Katz says. “There’s open space where tails can come out, and there will be water contact. It just makes it 100 times more probable to have one of these protrusions come out in highly curved regions of the membrane.”

This phenomenon appears to mimic a process that occurs naturally in cells — the fusion of vesicles with the cell membrane. Vesicles are small spheres of membrane-like material that carry cargo such as neurotransmitters or hormones.

The similarity between absorption of vesicles and nanoparticle entry suggests that cells where a lot of vesicle fusion naturally occurs could be good targets for drug delivery by gold nanoparticles. The researchers plan to further analyze how the composition of the membranes and the proteins embedded in them influence the absorption process in different cell types. “We want to really understand all the constraints and determine how we can best design nanoparticles to target particular cell types, or regions of a cell,” Van Lehn says.

“One could use the results from this paper to think about how to leverage these findings into improved nanoparticle delivery vehicles — for instance, perhaps new surface ligands for nanoparticles could be engineered to have improved affinity for both surface groups and lipid tails,” says Catherine Murphy, a professor of chemistry at the University of Illinois at Urbana-Champaign who was not involved in the study.

The research was funded by the National Science Foundation and the Swiss National Foundation.

From gold, a new way to control blood clotting