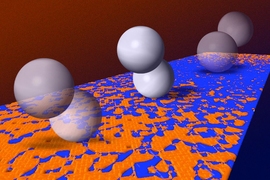 ↓ Download Image
Caption: This diagram represents the way microwalkers — created by an MIT team and made up of a pair of paramagnetic beads — can tumble across a surface under the influence of a rotating magnetic field. They tumble until they find areas where friction is greatest — due to higher concentrations of biological receptors — without any advance knowledge of where those areas may be. (Blue represents low-friction areas; orange represents high friction areas.)
Credits: Image: Jose-Luis Olivares/MIT (surface texture courtesy of Juan Aragones, Josh Steimel, and Alfredo Alexander-Katz)

↓ Download Image
Caption: This animation shows micro walkers tumbling across a surface, under the influence of a rotating magnetic field, until they find areas where friction is highest (represented by the orange area).
Credits: Courtesy of Juan Aragones, Josh Steimel, and Alfredo Alexander-Katz

Caption:
This diagram represents the way microwalkers — created by an MIT team and made up of a pair of paramagnetic beads — can tumble across a surface under the influence of a rotating magnetic field. They tumble until they find areas where friction is greatest — due to higher concentrations of biological receptors — without any advance knowledge of where those areas may be. (Blue represents low-friction areas; orange represents high friction areas.)

Nature has developed a wide variety of methods for guiding particular cells, enzymes, and molecules to specific structures inside the body: White blood cells can find their way to the site of an infection, while scar-forming cells migrate to the site of a wound. But finding ways of guiding artificial materials within the body has proven more difficult.

Now a team of researchers at MIT led by Alfredo Alexander-Katz, the Walter Henry Gale Associate Professor of Materials Science and Engineering, has demonstrated a new target-finding mechanism. The new system allows microscopic devices to autonomously find their way to areas of a cell surface, for example, just by detecting an increase in surface friction in places where more cell receptors are concentrated.

The finding is described this week in a paper in the journal Physical Review Letters, written by Alexander-Katz, graduate student Joshua Steimel, and postdoc Juan Aragones.

“The idea was to find out if we could create a synthetic, active system that could sense gradients in biological receptors,” Alexander-Katz explains. “Currently, we don’t know of anything that can do that.”

Cells have a way of locating areas that bear a specific kind of chemical signature — a process called chemotaxis. That’s the method used by white blood cells, for example, to locate regions where pathogens are attacking body cells.

“Our system is very simple,” Alexander-Katz says — similar to the way in which bacteria locate nutrients they need. The system, without guidance, samples areas on a surface and migrates toward those where friction is greater — which also correspond to areas where receptors are concentrated.

The system uses a pair of linked particles with magnetic properties. In the presence of a magnetic field, the paired particles begin to tumble across a surface, with first one particle and then the other making contact — in effect, “walking” across the surface.

So far, the work has been carried out on a model cell surface, on a functionalized microscope slide, but the effect should work similarly with living cells, Alexander-Katz says. The team’s goal now is to demonstrate the ability of the microscopic walkers to find their way toward concentrations of receptors in actual living tissue.

The method could potentially have a variety of applications, Alexander-Katz says. For example, it could be developed as a method of locating tumor cells within the body by identifying their surface texture, perhaps in combination with other characteristics.

Such magnetic microwalkers, he adds, could be unleashed to locate areas of interest on various kinds of surfaces, based solely on differences in friction. The particles naturally migrate toward high-friction regions, where they could then be induced to interact with a surface by active molecules attached to them.

“It’s a very versatile system,” Alexander-Katz says, that can be functionalized by attaching other kinds of receptors or binding agents to affect or monitor the target area in different ways.

This animation shows micro walkers tumbling across a surface, under the influence of a rotating magnetic field, until they find areas where friction is highest (represented by the orange area). (Enlarge to see animation.)

The next step is to test the approach in more complex settings. The initial work was done with flat surfaces; the team now aims to conduct studies in complex 3-D settings to make sure the process works effectively in situations that more closely resemble a real cellular environment.

Ignacio Pagonabarraga, a professor of fundamental physics at the University of Barcelona who was not connected with this research, says, “This simple synthetic system may be valuable to gain more insight into basic physical principles associated [with] durotaxis, the mechanical sensing mechanism by which cells displace on a substrate. The use of a pattern that localizes particles may be useful to enhance the localization of particles with specific properties.”

The research was supported by the U.S. Department of Energy, the MIT Energy Initiative, and the Chang family.

A system developed by Prof. Alfredo Alexander-Katz allows microscopic devices to navigate a cell’s surface, reports Alissa Zhu for Popular Science. “Doctors could use them to provide real-time updates on internal structures or distribute drugs to specific targets within a body.”