How crispy is your bonbon? 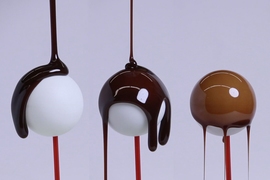 ↓ Download Image
Caption: The team was initially inspired by videos of chocolatiers making bonbons and other chocolate shells. Pedro Reis and his team wondered whether there was a way to precisely predict the final thickness of chocolate and other shells that start out as a liquid film.

Caption:
The team was initially inspired by videos of chocolatiers making bonbons and other chocolate shells. Pedro Reis and his team wondered whether there was a way to precisely predict the final thickness of chocolate and other shells that start out as a liquid film.
Credits:
Image: Melanie Gonick/MIT News

Since the 1600s, chocolatiers have been perfecting the art of the bonbon, passing down techniques for crafting a perfectly smooth, even chocolaty shell.

Now, a theory and a simple fabrication technique derived by MIT engineers may help chocolate artisans create uniformly smooth shells and precisely tailor their thickness. The research should also have uses far beyond the chocolate shop: By knowing just a few key variables, engineers could predict the mechanical response of many other types of shells, from small pharmaceutical capsules to large airplane and rocket bodies. The team’s results are reported today in the journal Nature Communications.

The researchers developed a fabrication technique to quickly create thin, rubbery shells, which involved drizzling liquid polymer over dome-shaped molds and spheres such as ping pong balls. They allowed the liquid to coat each mold and cure, or solidify, over 15 minutes. They then peeled the resulting shell off the mold and observed that it was smooth — virtually free of noticeable defects — with a nearly uniform thickness throughout.

Combining this simple technique with the theory they derived, the team created shells of various thicknesses by changing certain variables, such as the size of the mold and the polymer’s density. Surprisingly, they found that the shell’s final thickness does not depend on the volume of liquid or the height from which it is poured onto the mold.

“Think of this formula as a recipe,” says Pedro Reis, the Gilbert W. Winslow Associate Professor of mechanical engineering and civil and environmental engineering at MIT. “I’m sure chocolatiers have come up with techniques that give empirically a set of instructions that they know will work. But our theory provides a a much better, quantitative understanding of what’s going on, and one can now be predictive.”

Reis hopes that the group’s theory will reinvigorate studies in shell mechanics, a field that saw significant development in the 1950s and 60s.

“This is a really simple, robust, rapid prototyping technique, and we’ve established design principles together with a predictive framework that characterizes the fabrication of thin shells,” Reis says. “I think that will be powerful. We’re revisiting an old topic with new eyes.”

The thick and thin of it

The team was initially inspired by videos of chocolatiers making bonbons and other chocolate shells. By simply pouring chocolate into molds, then inverting the molds to let excess chocolate drain out, chocolate makers create shells of relatively uniform thickness. Reis’ team wondered whether there was a way to precisely predict the final thickness of chocolate and other shells that start out as a liquid film.

Lee and Marthelot used an analogous technique to experimentally create their own shells, using a liquid polymer solution that they drizzled over dome-shaped molds and spheres. After peeling the resulting shell off each mold, they cut the shell in half and found it was nearly the same thickness from top to bottom. But why?

To answer this question, Reis’ team systematically characterized the coating dynamics in each of their experiments, including the physical properties of the polymer, the size of the mold, how fast the fluid flows down a mold, and the time it takes for the polymer to cure.

Based on their data, the researchers developed a simple formula to estimate the final thickness of a shell, which essentially equals the square root of the fluid’s viscosity, times the mold’s radius, divided by the curing time of the polymer, times the polymer’s density and the acceleration of gravity as the polymer flows down the mold.

The formula boils down to the following relationships: The larger a mold’s radius, the longer it takes for fluid to flow to the bottom, resulting in a thicker shell; the longer the curing time, the faster the fluid will drain to the bottom, creating a thinner shell.

The researchers, led by Gallaire, then developed a numerical and analytical model to further test their simple mathematical formula, exploring more complex experimental configurations that are not easily feasible in the lab.

“You could go in the lab and lay down tons of ping pong balls and test various initial conditions, which is what Anna and Joel have been doing to some extent, but with numerics, you can get really creative,” Brun says.

For instance, in their models, the researchers explored complex coating patterns and the effects of changing a polymer’s curing time.

Ultimately, through modeling and experiments, Reis and his colleagues found they were able to control the thickness of a shell by shortening the polymer’s curing time. After mixing the polymer, they simply waited for it to thicken up before pouring it onto a mold. Because the polymer was already slightly solidified, it didn’t take that much longer to fully cure. The result: More polymer solidified onto the mold rather than draining off.

“By waiting between mixing and pouring the polymer, we can increase the thickness of a shell by a factor of 11,” says Lee.

“This flexibility of waiting gives us a simple parameter we can tune, depending on what we want for our final goal,” Reis says. “So I think ‘rapid fabrication’ is how we can describe this technique. Usually that term means 3-D printing and other expensive tools, but it could describe something as simple as pouring chocolate over a mold.”

This research is supported in part by the National Science Foundation.

MIT researchers have developed a technique to help predict the thickness of a round shell, reports Alexandra Ossola for Popular Science. The findings “could help researchers create shells with a predictable thickness and a uniform consistency at an industrial scale. That’s useful for a range of products, including pills and aerodynamic vehicles.”