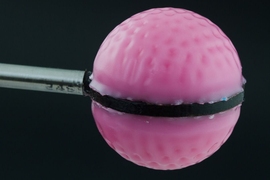 ↓ Download Image
Caption: Researchers made this sphere to test their concept of morphable surfaces. Made of soft polymer with a hollow center, and a thin coating of a stiffer polymer, the sphere becomes dimpled when the air is pumped out of the hollow center, causing it to shrink.

Credits: Photo courtesy of the researchers

Caption:
Researchers made this sphere to test their concept of morphable surfaces. Made of soft polymer with a hollow center, and a thin coating of a stiffer polymer, the sphere becomes dimpled when the air is pumped out of the hollow center, causing it to shrink.
Credits:
Photo courtesy of the researchers

There is a story about how the modern golf ball, with its dimpled surface, came to be: In the mid-1800s, it is said, new golf balls were smooth, but became dimpled over time as impacts left permanent dents. Smooth new balls were typically used for tournament play, but in one match, a player ran short, had to use an old, dented one, and realized that he could drive this dimpled ball much further than a smooth one.

Whether that story is true or not, testing over the years has proved that a golf ball’s irregular surface really does dramatically increase the distance it travels, because it can cut the drag caused by air resistance in half. Now researchers at MIT are aiming to harness that same effect to reduce drag on a variety of surfaces — including domes that sometimes crumple in high winds, or perhaps even vehicles.

Detailed studies of aerodynamics have shown that while a ball with a dimpled surface has half the drag of a smooth one at lower speeds, at higher speeds that advantage reverses. So the ideal would be a surface whose smoothness can be altered, literally, on the fly — and that’s what the MIT team has developed.

The ability to change the surface in real time comes from the use of a multilayer material with a stiff skin and a soft interior — the same basic configuration that causes smooth plums to dry into wrinkly prunes. To mimic that process, Reis and his team made a hollow ball of soft material with a stiff skin — with both layers made of rubberlike materials — then extracted air from the hollow interior to make the ball shrink and its surface wrinkle.

“Numerous studies of wrinkling have been done on flat surfaces,” says Reis, an assistant professor of mechanical engineering and civil and environmental engineering. “Less is known about what happens when you curve the surface. How does that affect the whole wrinkling process?”

The answer, it turns out, is that at a certain degree of shrinkage, the surface can produce a dimpled pattern that’s very similar to that of a golf ball — and with the same aerodynamic properties.

The aerodynamic properties of dimpled balls can be a bit counterintuitive: One might expect that a ball with a smooth surface would sail through the air more easily than one with an irregular surface. The reason for the opposite result has to do with the nature of a small layer of the air next to the surface of the ball. The irregular surface, it turns out, holds the airflow close to the ball’s surface longer, delaying the separation of this boundary layer. This reduces the size of the wake — the zone of turbulence behind the ball — which is the primary cause of drag for blunt objects.

When the researchers saw the wrinkled outcomes of their initial tests with their multilayer spheres, “We realized that these samples look just like golf balls,” Reis says. “We systematically tested them in a wind tunnel, and we saw a reduction in drag very similar to that of golf balls.”

Now you see it, now you don’t

Because the surface texture can be controlled by adjusting the balls’ interior pressure, the degree of drag reduction can be controlled at will. “We can generate that surface topography, or erase it,” Reis says. “That reversibility is why this is pretty interesting; you can switch the drag-reducing effect on and off, and tune it.”

As a result of that variability, the team refers to these as “smart morphable surfaces” — or “smorphs,” for short. The pun is intentional, Reis says: The paper’s lead author — Terwagne, a Belgian comics fan — pointed out that one characteristic of Smurfs cartoon characters is that no matter how old they get, they never develop wrinkles.

Terwagne says that making the morphable surfaces for lab testing required a great deal of trial-and-error — work that ultimately yielded a simple and efficient fabrication process. “This beautiful simplicity to achieve a complex functionality is often used by nature,” he says, “and really inspired me to investigate further.” 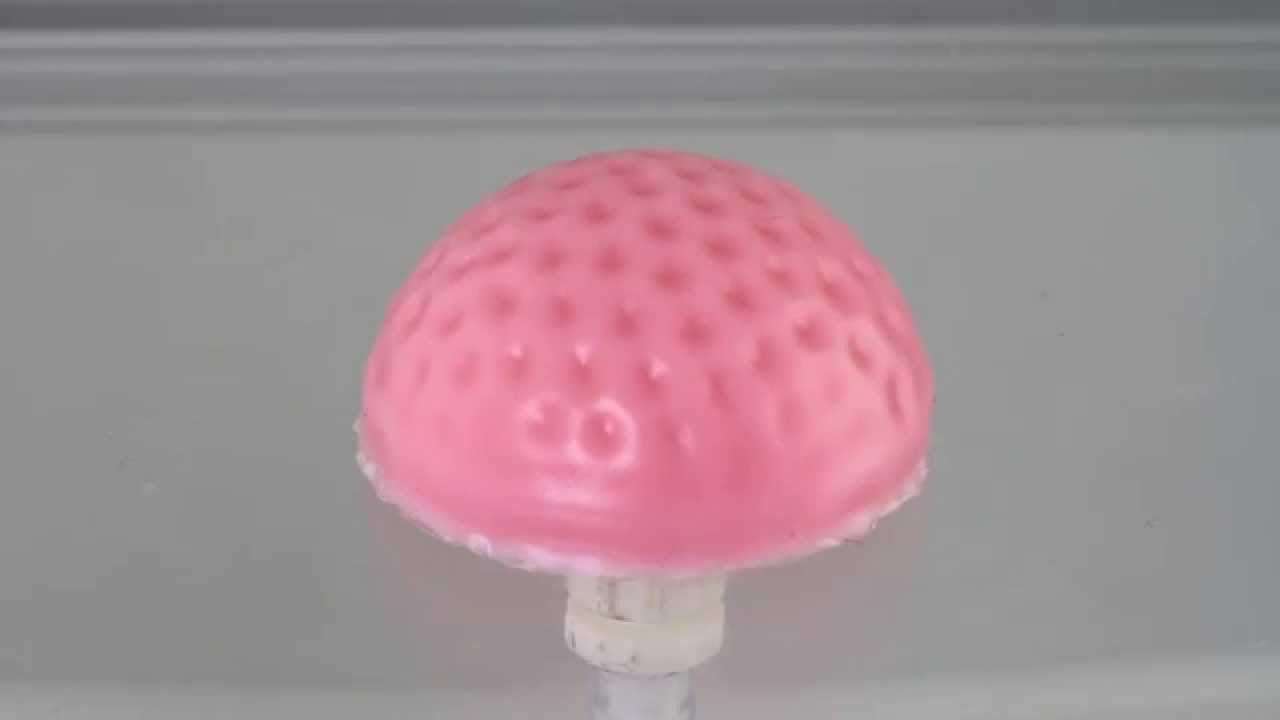 Play video
A morphable surface developed by an MIT team can change surface texture — from smooth to dimply, and back again — through changes in pressure. When the inside pressure is reduced, the flexible material shrinks, and the stiffer outer layer wrinkles. Increasing pressure returns the surface to a smooth state.

Many researchers have studied various kinds of wrinkled surfaces, with possible applications in areas such as adhesion, or even unusual optical properties. “But we are the first to use wrinkling for aerodynamic properties,” Reis says.

The drag reduction of a textured surface has already expanded beyond golf balls: The soccer ball being used at this year’s World Cup, for example, uses a similar effect; so do some track suits worn by competitive runners. For many purposes, such as in golf and soccer, constant dimpling is adequate, Reis says.

But in other uses, the ability to alter a surface could prove useful: For example, many radar antennas are housed in spherical domes, which can collapse catastrophically in very high winds. A dome that could alter its surface to reduce drag when strong winds are expected might avert such failures, Reis suggests. Another application could be the exterior of automobiles, where the ability to adjust the texture of panels to minimize drag at different speeds could increase fuel efficiency, he says.

John Rogers, a professor of materials research and engineering at the University of Illinois at Urbana-Champaign who was not involved in this work, says, “It represents a delightful example of how controlled processes of mechanical buckling can be used to create three-dimensional structures with interesting aerodynamic properties. The type of dynamic tuning of sophisticated surface morphologies made possible by this approach would be difficult or impossible to achieve in any other way.”

In a piece for Forbes, Nancy Pardo highlights the new Smart Morphable Surface developed by MIT researchers that can change its surface texture. The material could be used to make more aerodynamic and efficient vehicles.

Wired reporter Nick Stockton reports on Prof. Pedro Reis’ work developing a morphable surface that could be used to increase the efficiency and speed of vehicles. The surface can, “wrinkle into a dimpled pattern similar to a golf ball’s, with similar aerodynamic properties.”

Hal Hodson writes for The New Scientist about the Smart Morphable Surface developed by Professor Pedro Reis. The surface dimples into different depths and patterns to create the best aerodynamics for the conditions.

David Snzondy writes for GizMag about new materials created by a team that included Professor Nick Fang. These “metamaterials,” which are lightweight and can withstand weights 160,000 times their own, could have applications for the construction of aircraft and other vehicles.

Explained: How does a soccer ball swerve?