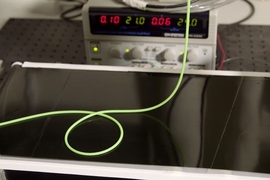 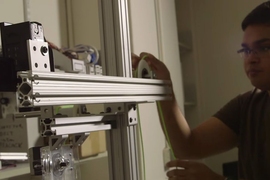 Caption:
Desktop-scale experiment used to explore the various possible patterns obtained when a thin polymer rod (in green) is deployed onto a moving substrate (black conveyer belt). In this example, the rod forms a periodic array of loops in alternative directions.

Caption:
Pattern of alternating loops formed when a rod is deployed onto a moving substrate. The rod first coils clockwise, then counter-clockwise, and the process repeats again, which leaves behind a highly regular pattern.
Credits:
Image courtesy of the researchers

The world’s fiber-optic network spans more than 550,000 miles of undersea cable that transmits e-mail, websites, and other packets of data between continents, all at the speed of light. A rip or tangle in any part of this network can significantly slow telecommunications around the world.

Now engineers at MIT, along with computer scientists at Columbia University, have developed a method that predicts the pattern of coils and tangles that a cable may form when deployed onto a rigid surface. The research combined laboratory experiments with custom-designed cables, computer-graphics technology used to animate hair in movies, and theoretical analyses.

In the lab, MIT engineers set up a desktop system to spool spaghetti-like cables onto a conveyor belt. They adjusted parameters such as speed of deployment and the speed of the belt, and observed how the cable coiled as it hit the surface.

At Columbia, computer scientists adapted a source code used for simulating animated hair and, incorporating the parameters of the MIT experiment, found that the simulation accurately predicted the coiling patterns seen in the lab.

The researchers say the coil-predicting method may help design better deployment strategies for fiber-optic cables to avoid the twisting and tangling that can lead to transmission glitches and data loss.

“We now have a set of design guidelines that allow you to tune certain parameters to achieve a particular pattern,” says Pedro Reis, an associate professor of mechanical engineering and civil and environmental engineering at MIT. “We have a description that applies to many systems.”

Reis and his colleagues publish their results this week in the Proceedings of the National Academy of Sciences. His co-authors are Khalid Jawed of MIT and Fang Da, Jungseock Joo, and Eitan Grinspun of Columbia University.

Shipping up to Boston

Fiber-optic cables are typically deployed from a sailing vessel, which unfurls lengths of cable from a large spool. Depending on how the sailing speed of the boat relates to the speed of the spool, cable can be deposited on the seafloor in straight lines, or in meandering, coiling patterns.

“If the boat is sailing slower than the rate of the cable, then you’re putting more cable down, which generates loops, coils, and tangles,” Reis says. “That can lead to signal attenuation. But if the boat is traveling faster, then the cable can get taut and fracture, which is really bad news. So we wanted to understand what was underlying those patterns.”

To do this, Reis set up a small-scale version of a cable-deploying system in his lab. He and his students fabricated filaments from silicone-based rubber, and rigged a spool to automatically reel out the wire onto a conveyor belt. They altered various parameters of the setup, including the speed of the belt and the spool.

The team used a digital video camera to record the filaments’ motion as they hit the belt, and observed three main patterns: meandering waves, alternating loops, and repeated coils.

Using custom-designed cables, computer-graphics technology used to animate hair in movies, and theoretical analyses, engineers produced patterns of coils in the lab that simulations were able to predict.

To see if these patterns could be predicted in simulations, Reis teamed up with Grinspun, an expert in discrete differential geometry. Grinspun has applied sophisticated mathematical methods to simulating the movement of thin filaments such as hair and cloth — notoriously difficult features to animate realistically — for films including “The Hobbit” and Disney’s “Tangled.”

“The eye is very good at picking up what’s physical and what’s not,” Grinspun says. “We want to capture the motion of hair and clothing in a realistic way, so a lot of algorithms we develop, we need to think about geometry.”

Grinspun had previously upgraded a code he developed to simulate hair to model the flow of viscous fluids like honey. As honey is poured from a jar, it can resemble rope or thread, drizzling onto a surface in wavelike patterns. Reis wondered if the same code could be adopted to simulate the coiling of cables.

“We realized that I’m using geometry to scale up and down problems, and he’s using geometry to speed up his codes, so we thought that we should port some of his algorithms into engineering, and test if these patterns can be predicted,” Reis says.

At first, the collaborative effort produced mixed results: Patterns seen in experiments could not be replicated in simulations. The researchers eventually identified a key feature they were not originally factoring into the simulations: the natural curvature of the filament, which, when wound on a spool, retains a certain amount of curve as it’s unwound. This initial mismatch between experiments and simulations motivated Reis to devise an experimental protocol to fabricate rods with customizable natural curvature.

With natural curvature now incorporated in the simulations and controlled in the lab, the researchers found that they were able to simulate the exact patterns observed in experiments. They then tuned the dimensions of various features in the simulation, and found they were able to predict the shape and amplitude of curves formed, based on several main factors: the speed of the wire deployed, the speed of the conveyor belt, the stiffness and diameter of the filament, and the size of its spool (a measure that determines a wire’s natural curvature).

They also found, surprisingly, that the height from which a filament is deployed does not influence its coiling patterns — good news for ships that navigate choppy waters to deploy fiber-optic cables.

“This is important because, as a ship sails, the height of the ocean floor relative to the surface is changing all the time,” Grinspun says. “We also know that how big you make the spools on the ship does matter. So we now have a map of how cables coil, and an understanding of what variables are important if you’re trying to achieve certain patterns.”

Going forward, Reis says that he and Grinspun may collaborate on other projects to understand and simulate the motion of thin filaments with features such as fluid drag and friction. For example, an understanding of such relationships from an engineering standpoint may improve the animation of phenomena such as hair blowing in the wind.

“I think what we now have is a bridge between these two fields, and we can start having traffic back and forth,” Reis says.