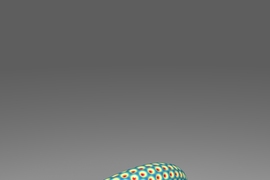 ↓ Download Image
Caption: MIT researchers have developed a mathematical equation that predicts how surface patterns form on curved objects. Pictured is a sphere with a combination of hexagons and labyrinthine patterns, and a more complex, torus-shaped object with hexagonal dimples.
Credits: Image: Norbert Stoop 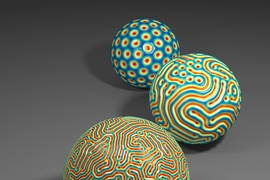 ↓ Download Image
Caption: Depending on an object's curvature, its pattern can change from hexagons (background) to labyrinths (foreground), or a transitional state (middle).
Credits: Image: Norbert Stoop

Caption:
MIT researchers have developed a mathematical equation that predicts how surface patterns form on curved objects. Pictured is a sphere with a combination of hexagons and labyrinthine patterns, and a more complex, torus-shaped object with hexagonal dimples.
Credits:
Image: Norbert Stoop

Caption:
Depending on an object's curvature, its pattern can change from hexagons (background) to labyrinths (foreground), or a transitional state (middle).
Credits:
Image: Norbert Stoop

As a grape slowly dries and shrivels, its surface creases, ultimately taking on the wrinkled form of a raisin. Similar patterns can be found on the surfaces of other dried materials, as well as in human fingerprints. While these patterns have long been observed in nature, and more recently in experiments, scientists have not been able to come up with a way to predict how such patterns arise in curved systems, such as microlenses.

Now a team of MIT mathematicians and engineers has developed a mathematical theory, confirmed through experiments, that predicts how wrinkles on curved surfaces take shape. From their calculations, they determined that one main parameter — curvature — rules the type of pattern that forms: The more curved a surface is, the more its surface patterns resemble a crystal-like lattice.

The researchers say the theory, reported this week in the journal Nature Materials, may help to generally explain how fingerprints and wrinkles form.

“If you look at skin, there’s a harder layer of tissue, and underneath is a softer layer, and you see these wrinkling patterns that make fingerprints,” says Jörn Dunkel, an assistant professor of mathematics at MIT. “Could you, in principle, predict these patterns? It’s a complicated system, but there seems to be something generic going on, because you see very similar patterns over a huge range of scales.”

The group sought to develop a general theory to describe how wrinkles on curved objects form — a goal that was initially inspired by observations made by Dunkel’s collaborator, Pedro Reis, the Gilbert W. Winslow Career Development Associate Professor in Civil Engineering.

In past experiments, Reis manufactured ping pong-sized balls of polymer in order to investigate how their surface patterns may affect a sphere’s drag, or resistance to air. Reis observed a characteristic transition of surface patterns as air was slowly sucked out: As the sphere’s surface became compressed, it began to dimple, forming a pattern of regular hexagons before giving way to a more convoluted, labyrinthine configuration, similar to fingerprints.

“Existing theories could not explain why we were seeing these completely different patterns,” Reis says.

Denis Terwagne, a former postdoc in Reis’ group, mentioned this conundrum in a Department of Mathematics seminar attended by Dunkel and postdoc Norbert Stoop. The mathematicians took up the challenge, and soon contacted Reis to collaborate.

Ahead of the curve

Reis shared data from his past experiments, which Dunkel and Stoop used to formulate a generalized mathematical theory. According to Dunkel, there exists a mathematical framework for describing wrinkling, in the form of elasticity theory — a complex set of equations one could apply to Reis’ experiments to predict the resulting shapes in computer simulations. However, these equations are far too complicated to pinpoint exactly when certain patterns start to morph, let alone what causes such morphing.

Combining ideas from fluid mechanics with elasticity theory, Dunkel and Stoop derived a simplified equation that accurately predicts the wrinkling patterns found by Reis and his group.

“What type of stretching and bending is going on, and how the substrate underneath influences the pattern — all these different effects are combined in coefficients so you now have an analytically tractable equation that predicts how the patterns evolve, depending on the forces that act on that surface,” Dunkel explains.

In computer simulations, the researchers confirmed that their equation was indeed able to reproduce correctly the surface patterns observed in experiments. They were therefore also able to identify the main parameters that govern surface patterning.

As it turns out, curvature is one major determinant of whether a wrinkling surface becomes covered in hexagons or a more labyrinthine pattern: The more curved an object, the more regular its wrinkled surface. The thickness of an object’s shell also plays a role: If the outer layer is very thin compared to its curvature, an object’s surface will likely be convoluted, similar to a fingerprint. If the shell is a bit thicker, the surface will form a more hexagonal pattern.

Dunkel says the group’s theory, although based primarily on Reis’ work with spheres, may also apply to more complex objects. He and Stoop, together with postdoc Romain Lagrange, have used their equation to predict the morphing patterns in a donut-shaped object, which they have now challenged Reis to reproduce experimentally. If these predictions can be confirmed in future experiments, Reis says the new theory will serve as a design tool for scientists to engineer complex objects with morphable surfaces.

“This theory allows us to go and look at shapes other than spheres,” Reis says.
“If you want to make a more complicated object wrinkle — say, a Pringle-shaped area with multiple curvatures — would the same equation still apply? Now we’re developing experiments to check their theory.”

Sarah Lewin writes for Wired about research by Professor Pedro Reis and a team of MIT mathematicians on the formation of wrinkles in materials. “What’s beautiful about this work is the collaboration between experimentalists and theorists,” says Reis. “We challenged them with results we didn’t understand, and they went somewhere new.”

Francie Diep writes for Popular Science about how a new mathematical theory developed by MIT researchers may help to explain how surfaces wrinkle. “The equation could help chemists working on high-tech materials,” explains Diep.