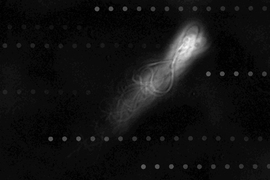 Like salmon traveling upstream to spawn, sperm cells are extremely efficient at swimming against the current, according to research to be published this week.

The discovery, to be published in the journal eLife by researchers at MIT and Cambridge University, may help us to understand how some sperm travel such long distances, through difficult terrain, to reach and fertilize an egg.

Of the hundreds of millions of sperm cells that begin the journey up the oviducts, only a few hardy travelers will ever reach their destination. Not only do the cells have to swim in the right direction over distances that are around 1,000 times their own length, but they are exposed to different chemicals and currents along the way.

While we know that sperm cells can “smell” chemicals given off by the egg once they get very close to it, this does not explain how they navigate for the majority of their journey, says Jörn Dunkel, an assistant professor of mathematics at MIT, and a member of the research team.

“We wanted to know which physical mechanisms could be responsible for navigation,” says Dunkel, who carried out the research alongside Vasily Kantsler of the Skolkovo Institute of Science and Technology and the University of Warwick (and currently visiting at MIT); Raymond E. Goldstein of Cambridge; and Martyn Blayney of the Bourn Hall Clinic in the U.K. “If you think of salmon, for example, they can swim against the stream, and the question was whether something similar could really be confirmed for human sperm cells.”

Microchannels in lieu of oviducts

However, observing sperm cells swimming within the human body itself is no easy task. So in a bid to understand what the cells are capable of, the researchers instead built a series of artificial microchannels of different sizes and shapes, into which they inserted the sperm. They were then able to modify the flow of fluid through the tubes, to investigate how the cells responded to different current speeds.

They discovered that at certain flow speeds, the sperm cells were able to swim very efficiently upstream. “We found that if you create the right flow velocities, you can observe them swimming upstream for several minutes,” Dunkel says. “The mechanism is very robust.”

What’s more, the researchers were also surprised to observe that the sperm were not swimming in a straight line upstream, but in a spiraling motion, along the walls of the channel. The sperm cells react to the difference in the speed of current near the walls of the chamber — where the fluid is attracted to the surface, and is therefore at its slowest — and the free-flowing center of the tube, Dunkel says.

If biologists are able to observe similar fluid-flow speeds within the oviduct, it could help confirm whether sperm cells are indeed using this mechanism to navigate through the body, he says.

Not only would this improve our understanding of human reproduction, but it could also one day allow us to design new diagnostic tools and more efficient artificial-insemination techniques, the researchers claim. Reproduction specialists could take sperm samples and artificially recreate the conditions within the body to identify the cells that are the best swimmers, in a bid to preselect those most likely to succeed, Dunkel says.

The researchers can also experiment with different fluid viscosities within the microchannels, to determine which result in the strongest upstream swimming effect, he says. “So the idea would be to fine-tune the properties of the fluid medium that the sperm cells are contained in, before you insert it into the body, so that you know the cells can achieve optimal upstream swimming.”

Jackson Kirkman-Brown, honorary reader in reproductive science at the University of Birmingham and science lead for the Birmingham Women’s Fertility Centre, both in the U.K., says the research gives us an important new insight into a mechanism that sperm may be using to navigate inside the human body.

“We really know effectively nothing about how sperm cells navigate, so this gives us more information about a potential mechanism that may be important,” he says. “It’s telling us that human sperm seem to move differently to other things that propel themselves with a tail.”

However, much more work will be needed to determine if sperm cells behave in the same way in the much more complex terrain inside the oviduct itself. “This is a huge step in understanding what might influence sperm in that environment, but it’s far from explaining what does influence them,” Kirkman-Brown says. “People will certainly try to find this mechanism happening [inside the body], but it’s going to be a complicated chase.”

In the meantime, the researchers plan to begin investigating whether sperm cells can work together to reach the egg. “It is a commonly held belief that there is competition between sperm cells, with the fittest reaching the egg first,” Dunkel says. “But recent studies by our team and others show that sperm practically always accumulate at the surface of a tube, and you can end up with a high local concentration of sperm cells, so there could actually be cooperation among these cells that allows them to swim faster collectively.”

The research was supported by the European Research Council.

The Huffington Post reports on new MIT research examining how sperm cells travel and function. The team’s findings, which show how sperm travel upstream so efficiently, could lead to advances in artificial insemination.

Researchers find that going with the flow makes bacteria stick