Bringing biochemistry to life with color 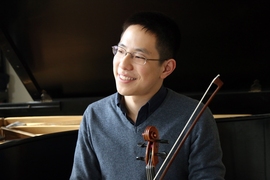 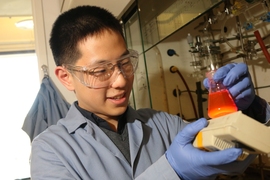 From a young age, Daniel Zhang, an MIT senior majoring in biology and chemistry, viewed the world around him as a dazzling array of molecules. Zhang asked all of the normal childhood questions — such as, “Why is the sky blue?” — but with two chemists for parents, his answers always came in the most literal, scientific form.

“There was also a lot of chemistry talk at the dinner table,” Zhang says. “Since then, I’ve always been fascinated by how molecules contribute to, and form, the world we see.”

Zhang started off at MIT as a chemistry major, but after taking many courses in biology on the side, he became equally enthralled by the chemical minutiae of how his own body worked, knowing that all of the cartoony diagrams in his textbooks were representations of activity happening inside him at any given moment.

For many, biochemistry can be tough to grasp because it isn’t easily seen. For Zhang, who grew up in a suburb of Boston, it took an influential high school teacher to bring the subject to life through colors. The class learned how to do basic flame tests — identifying elements, generally metals, by the colors they emit when lit on fire. The dynamic display of bright reds, greens, and blues took chemistry away from obscure symbols and into the real world for Zhang, who has been interested in this type of display at the biological level ever since.

“When I got to MIT, I joined a lab where we look at the role of metals in human health and disease, and how we can leverage that to understand disease better,” he says.

Since the summer after his freshman year, Zhang has been part of the research team in the laboratory of Stephen Lippard, the Arthur Amos Noyes Professor of Chemistry, where he looks at the role of zinc in prostate cancer. The prostate naturally contains high levels of zinc; in a cancerous state, however, those levels begin to drop. Lippard’s lab aims to pair this knowledge with zinc-detection tools as a new diagnostic approach.

Ironically, zinc is one of the few metals that doesn’t have an emission color, so Zhang helped design a detector molecule that fluoresces when zinc is present. The detector molecules are precise enough even to show exactly where in the cell zinc molecules are. From his view behind the microscope, Zhang watches glowing pieces roam around inside a cell, and has to remain grounded about the reality of the colorful show he’s watching.

“You build these sensors using chemical synthesis, and you don’t know what’s happening until you put the dish under the microscope and see that it’s glowing,” Zhang says. “But you have to keep it in your head that when you’re seeing green, it’s not just a pretty color, but it’s telling you where the actual zinc molecules are.”

Zhang’s project holds promise as an alternative diagnostic tool for prostate cancer — replacing invasive biopsies, which are the current go-to. Zhang’s research focuses on nailing down the best way of measuring zinc in prostate cells, but the question of whether or not this is truly a better way of diagnosing prostate cancer hasn’t been answered yet. Zinc levels alone aren’t an indicator of cancer — a person can have a high-zinc day or a low-zinc day and still be healthy. As a chemist, Zhang sees himself as part of a global scientific team, and knows that his role alone has limits — but he’s comfortable with those limits.

“There’s definitely another factor at play [in determining cancer], but we’re chemists, so we decided not to pursue that question,” he says. “The detection tools we’ve developed will hopefully help lay the groundwork for other fields of research to answer that.”

Only one lab for him

Zhang has been with Lippard’s lab for most of his undergraduate career — meaning he’s been able to go particularly deep in his research.

“It wasn’t necessarily my plan from the beginning to stick with one lab all along,” he says. “But having the time to really feel comfortable working somewhere is when it started getting really exciting. I’ve been with this project for three years now, so I really understand what the questions and limitations are.”

Going deep with one project also gave Zhang the chance to be part of several published papers, and to land the coveted first author spot in a February paper published in the American Chemical Society’s journal Chemical Biology.

The lab’s rule was that to snag first author, Zhang had to do everything on his own: the experiments themselves, writing and inputting peer-review edits, designing graphs, and more. Arranging things so they made sense, he says, was actually the hardest part of the process.

“If you work on a project for so long, you get very comfortable, and it’s hard to learn how to step back and explain your work to someone who may be new to it,” Zhang says.

Part of what equips Zhang to handle the often-tedious process of scientific research is his background in music. He started playing the violin at age 4, and loathed it. But his mother pushed him to practice for an hour every single day, and emphasized drilling the basics over and over again, like practicing scales.

It wasn’t until middle school, when Zhang joined the school orchestra, that he started to love his instrument. Combining the efforts of many individuals in working toward one cohesive final product electrified him, and ultimately led him to interact with music through conducting as well. While at MIT, he worked as an assistant conductor for the Boston Opera Collaborative on a production of Giacomo Puccini’s “La Bohéme,” and has acted as a conductor for the MIT IAP Orchestra over the Institute’s winter break for the past three years.

Although Zhang never sought to combine his interests in science and music — some friends had suggested he study how the chemicals in varnish affect violin sound quality — the two are linked in that they require a certain type of unwavering discipline.

“There’s a lot of tedious work required to get something done; there’s just no way around it,” he says. “You need to practice your scales over and over and over, otherwise you won’t get it right, and science is a lot like that, too. A lot of experiments build up to that big one, but you have to crank through the less exciting ones first.”

Next year, Zhang will enroll in the MD/PhD program at the University of Pennsylvania. His goal is to work as both a clinical doctor and a medical researcher, taking a two-pronged approach to health care.

“I feel passionate about bringing basic science to the clinic,” he says. “I want to be able to work with patients that have real, substantial concerns, and to be able to drive the advancements in the lab that will help them most.”

Having spent the past three years focusing solely on prostate cancer, he plans to focus on other diseases moving forward. Although he doesn’t have a research area in mind yet, he generally envisions himself becoming an expert in one very specific disease that afflicts a small group of patients. His goal is to know his patients well, and still devote ample time to lab research.