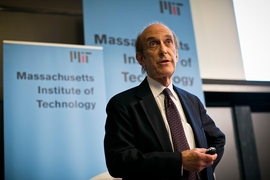 More than half of all cancer patients who receive chemotherapy are treated with drugs containing platinum. These drugs are very powerful, but like many other chemotherapy agents, they can have side effects and may provoke resistance in tumor cells.

Although platinum-based drugs have been used since the late 1970s, it has taken scientists decades to fully understand how they work. “It’s a very simple question but it has a complicated answer,” Stephen Lippard, the Arthur Amos Noyes Professor of Chemistry at MIT, said during yesterday’s James R. Killian Jr. Faculty Achievement Award Lecture.

For his contributions to unraveling the mechanism of how platinum drugs kill cancer cells, Lippard, one of the founders of the field of bioinorganic chemistry, was awarded this year’s Killian Award. “His groundbreaking work has pushed back the frontiers of inorganic chemistry, while simultaneously paving the way for improvements in human health and the conquering of disease,” reads the award citation.

“It’s a great honor for me to be here,” Lippard said after receiving the award from Steven Hall, chair of the MIT faculty and a professor of aeronautics and astronautics. “It’s very humbling to be selected by one’s peers for this honor.”

When Lippard began his scientific career in the 1960s, the biological activity of the first platinum drug, cisplatin, had just been identified. The discovery was serendipitous: Michigan State chemist Barnett Rosenberg was investigating the effects of electric fields on the growth of E. coli bacteria, which stopped dividing and grew into long filaments. He eventually realized that platinum leaching from the electrodes used in the experiment was reacting with ammonium chloride in the bacteria’s environment to produce cisplatin, which induced the filamentous growth without the electric field.

Subsequently Rosenberg showed that cisplatin could shrink tumors in mice, and the National Cancer Institute began running clinical trials; the Food and Drug Administration approved the drug for treatment of cancer in 1978. Since then, two related platinum drugs, carboplatin and oxaliplatin, have also been approved to treat cancer.

After receiving his PhD from MIT in 1965, Lippard joined the faculty at Columbia University and began investigating how these drugs worked, with a focus on their impact on DNA. He continued this pursuit after returning to MIT in 1983, eventually building up evidence that platinum drugs bind to DNA at specific locations, forming cross-links. These linkages prevent the cell from transcribing the genes necessary to initiate cell division, so the cells become unable to divide and undergo programmed cell death, or apoptosis.

“From that understanding, our ultimate goal was to see if we could make improved drug candidates,” said Lippard, who is a member of MIT’s Koch Institute for Integrative Cancer Research.

Although platinum drugs have been used successfully to treat many types of cancer — especially testicular cancer — they also have limitations: The drugs can have significant side effects, and cancer cells can become resistant to them, allowing tumors to recur. “That has led us, and others around the world, to look at nonclassical platinum compounds,” Lippard said.

In one approach Lippard described, he and others are modifying cisplatin by adding two more chemical groups that have their own anti-cancer activity. After entering a cancer cell, the two components are released, generating cisplatin in the process, and together they attack the cell on multiple fronts. In one early example, Lippard attached cisplatin to a drug known as DCA, which interferes with cancer cell metabolism, forcing them to undergo apoptosis.

Although the DCA-platinum compound proved powerful against cancer cells, Lippard said he doesn’t believe it will be developed as a cancer drug. However, this work demonstrated that such an approach is viable: “It shows that we can alter two different types of processes in cancer cells, which I think would make it much more difficult for them to become resistant and hopefully would lead to clinical success,” he said.

He also described efforts to package cisplatin into targeted nanoparticles, which could help minimize the drug’s side effects and also deliver it directly to cancer cells. He is one of the founders of a company called Blend Therapeutics that is developing this and other approaches to treat cancer.

Another way to improve platinum drugs, Lippard said, is to replace one chloride ion with a large chemical group to form a complex that impedes the transcription of DNA in tumors but without forming cross-links. Earlier research had suggested that neutral platinum compounds with two DNA-binding sites that form cross-links are required to kill cancer cells, but more recent studies have shown that some positively charged “monofunctional” platinum compounds with only one DNA-binding site also have anti-cancer activity.

In a study published in 2012, Lippard showed that a compound called phenanthriplatin, in which one chloride ion is replaced by a bulky three-ring structure, was four to 40 times more potent than cisplatin in a screen of many types of cancer cells. The next step is to test the compound’s effectiveness in animals, he said, which, with additional improvements, may lead to a clinical trial.

“We’re pretty excited about it and we think that phenanthriplatin and compounds like it could be developed and go forward,” Lippard said. “I would like to cure at least one person of cancer before I leave the planet.”