Tracing the evolution of a landscape 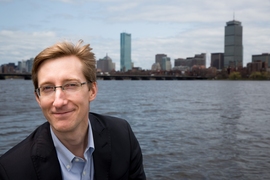 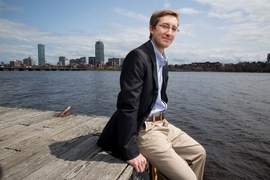 From above, parts of California’s Southern Coast Ranges appear startlingly uniform: The landscape is composed of ridges and valleys that form a pattern of parallel lines as evenly spaced as teeth on a comb.

“When you see such a regular pattern, it’s like the landscape is screaming at you to figure out what’s making it do that,” says Taylor Perron, an associate professor of geology in MIT’s Department of Earth, Atmospheric and Planetary Sciences (EAPS).

The pattern is not unique to the California Coast Ranges; many landscapes around the world have evenly spaced valleys. In 2006, as a graduate student at the University of California at Berkeley, Perron hit upon a physical process to explain this striking feature of Earth’s topography: The even spacing of valleys arose from competing forces of rivers eroding valleys and soil creeping downhill and filling them in. One force balances the other, keeping adjacent valleys from getting either too close or too far apart.

As part of his PhD thesis, Perron worked his theory into a computational model to show how landscapes in the Coast Ranges and elsewhere might have morphed over millennia into their present-day forms. To see whether the model’s results matched today’s geomorphology, Perron made topographic measurements and calculated erosion rates at various sites. As it turns out, Perron’s model successfully reproduced the valley spacing in regions with different geologic characteristics, providing a quantitative answer to how such landscapes took shape.

At MIT, Perron — who was recently granted tenure — uses a similar combination of fieldwork and computational tools to explore the shifting topography of river networks on Earth, as well as elsewhere in the solar system. For instance, he and his group have used data collected by the Cassini-Huygens spacecraft to study landforms on Saturn’s largest moon, Titan.

“As you might expect, you see some things that are totally foreign, like nothing you see on Earth,” Perron says. “But the thing that has fascinated me is that you see a lot of other things that look almost exactly like what you see on Earth. That tells you there are some processes — despite the difference in gravity, atmospheric composition, and surface age — that are universal.”

Perron says his interest in landscape evolution was cultivated in childhood. He grew up in northern Vermont, at the foot of Mount Mansfield — the Green Mountains’ highest peak.

“I think being around landscapes without a lot of human development influenced my decision to study geology,” Perron says. “Landscapes are beautiful in artistic and scientific form. … Understanding how they tick, how they develop over time, can enhance our appreciation of what’s around us.”

Before arriving at landscape evolution as a research focus, Perron took “a pretty significant detour along the way.” As an undergraduate at Harvard University, he majored in archaeology — a subject that combined his interests in writing, art history, and the physical sciences. He traveled to the Middle East, where he and a group of researchers discovered stone tools in a cave in northern Israel. The tools dated from a period during which humans are thought to have been transitioning from a nomadic to a sedentary lifestyle.

“At the time, archaeologists were thinking a lot about how the geological context, especially the climate, might have influenced the tendency of people to cultivate crops,” Perron says.

He also worked at a field site in coastal Virginia, studying artifacts for clues on how and when the first humans arrived in the Americas. Determining the age of stone tools typically involves dating any nearby charcoal. But when Perron analyzed the clay and sand in the area, he found that, at least at this particular site, the charcoal wasn’t necessarily an indicator of the artifacts’ age — a finding that further highlighted the importance of an archaeological site’s geological context.

After graduating from Harvard, Perron spent a year working for the U.S. Geological Survey (USGS) in California. For part of his time there, he worked on a seismic survey of Los Angeles, a project that started after the 1994 Northridge earthquake, which occurred on a previously unknown fault. The USGS survey aimed to map other buried faults by setting off small explosions and recording their reverberations along a line that cut through western Los Angeles and the San Fernando Valley to the Mojave Desert.

Part of Perron’s job was to obtain permission from landowners situated along the fault to carry out the survey on their property.

“It was eye-opening, because part of what I did was to get permission to drill holes and detonate charges on public land, and put seismometers in people’s flowerbeds and backyards,” Perron recalls. “It really helped me appreciate how difficult it is to communicate science.”

A climate of curiosity

Toward the tail end of his internship at the USGS, Perron met two Berkeley geomorphologists who introduced him to the field of landscape evolution. “Something just clicked, and I said, ‘That’s what I’ve been looking for,’” Perron says.

Soon after, he enrolled at Berkeley, eventually receiving a PhD in earth and planetary science.

“The landscapes I remember most vividly are the most forbidding and otherworldly,” Perron says. “You pass over a high ridge where there are glaciers peeking down into a valley with almost no vegetation, and you keep going and come to a windswept plain paved with gravel, and patches of the most intense dark green you’ve ever seen, with volcanic cones poking up here and there. Just seeing the variety of landforms that can develop, in such a compact area, convinced me it was something I really had to try to understand.”

In 2009, Perron joined EAPS as an assistant professor, and has since been studying the forces that shape landscapes over time. In the next few years, he’s hoping to explore two new areas of research: how the shape of landforms influences stresses deep in the Earth, and how evolving river networks shape the diversity of animal species in a given region.

“I think MIT is a place that really values basic scientific research that’s driven by curiosity,” Perron says. “There are many historical examples of why that’s a great policy and a great philosophy. And being in that kind of climate has really inspired me.”

Prof. Taylor Perron speaks with Boston Globe reporter Martin Finucane about the recent announcement that a lake was detected underneath the surface of Mars. “One of the exciting things about this discovery is that there could be other liquid water pockets like this one,” notes Perron.

The hills are evolving