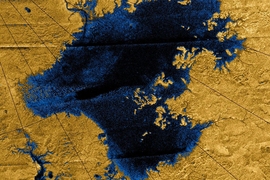 For many years, Titan's thick, methane- and nitrogen-rich atmosphere kept astronomers from seeing what lies beneath. Saturn's largest moon appeared through telescopes as a hazy orange orb, in contrast to other heavily cratered moons in the solar system.

In 2004, the Cassini-Huygens spacecraft — a probe that flies by Titan as it orbits Saturn — penetrated Titan's haze, providing scientists with their first detailed images of the surface. Radar images revealed an icy terrain carved out over millions of years by rivers of liquid methane, similar to how rivers of water have etched into Earth's rocky continents.

While images of Titan have revealed its present landscape, very little is known about its geologic past. Now researchers at MIT and the University of Tennessee at Knoxville have analyzed images of Titan's river networks and determined that in some regions, rivers have created surprisingly little erosion. The researchers say there are two possible explanations: either erosion on Titan is extremely slow, or some other recent phenomena may have wiped out older riverbeds and landforms.

"It's a surface that should have eroded much more than what we're seeing, if the river networks have been active for a long time," says Taylor Perron, the Cecil and Ida Green Assistant Professor of Geology at MIT. "It raises some very interesting questions about what has been happening on Titan in the last billion years."

A paper detailing the group's findings will appear in the Journal of Geophysical Research-Planets.

What accounts for a low crater count?

Compared to most moons in our solar system, Titan is relatively smooth, with few craters pockmarking its facade. Titan is around four billion years old, about the same age as the rest of the solar system. But judging by the number of craters, one might estimate that its surface is much younger, between 100 million and one billion years old.

What might explain this moon's low crater count? Perron says the answer may be similar to what happens on Earth.

"We don't have many impact craters on Earth," Perron says. "People flock to them because they're so few, and one explanation is that Earth's continents are always eroding or being covered with sediment. That may be the case on Titan, too."

For example, plate tectonics, erupting volcanoes, advancing glaciers and river networks have all reshaped Earth's surface over billions of years. On Titan, similar processes — tectonic upheaval, icy lava eruptions, erosion and sedimentation by rivers — may be at work.

But identifying which of these geological phenomena may have modified Titan's surface is a significant challenge. Images generated by the Cassini spacecraft, similar to aerial photos but with much coarser resolution, are flat, depicting terrain from a bird's-eye perspective, with no information about a landform's elevation or depth. 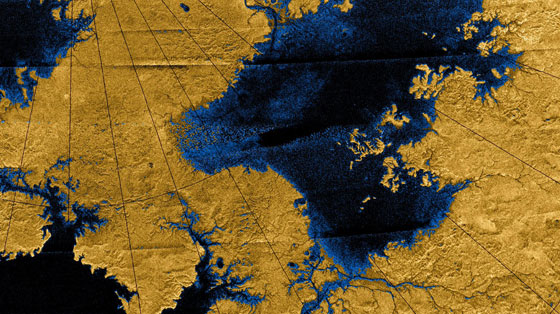 "It's an interesting challenge," Perron says. "It's almost like we were thrown back a few centuries, before there were many topographic maps, and we only had maps showing where the rivers are."

Perron and MIT graduate student Benjamin Black set out to determine the extent to which river networks may have renewed Titan's surface. The team analyzed images taken from Cassini-Huygens, and mapped 52 prominent river networks from four regions on Titan. The researchers compared the images with a model of river network evolution developed by Perron. This model depicts the evolution of a river over time, given variables such as the strength of the underlying material and the rate of flow through the river channels. As a river erodes slowly through the ice, it transforms from a long, spindly thread into a dense, treelike network of tributaries.

Black compared his measurements of Titan's river networks with the model, and found the moon's rivers most resembled the early stages of a typical terrestrial river's evolution. The observations indicate that rivers in some regions have caused very little erosion, and hence very little modification of Titan's surface.

"They're more on the long and spindly side," Black says. "You do see some full and branching networks, and that's tantalizing, because if we get more data, it will be interesting to know whether there really are regional differences."

Going a step further, Black compared Titan's images with recently renewed landscapes on Earth, including volcanic terrain on the island of Kauai and recently glaciated landscapes in North America. The river networks in those locations are similar in form to those on Titan, suggesting that geologic processes may have reshaped the moon's icy surface in the recent past.

Oded Aharonson, a professor of planetary science at the California Institute of Technology, says analyzing geologic processes on Titan may help scientists understand how rivers form. “Besides Earth, Titan is the only world where we see active river networks forming as a result of an active hydrologic cycle,” Aharonson says. “The finding suggests the process of river erosion on Titan is currently responding to resurfacing or resetting of the surface.”

"It's a weirdly Earth-like place, even with this exotic combination of materials and temperatures," Perron says. "And so you can still say something definitive about the erosion. It's the same physics."

This research was supported by NASA's Cassini Data Analysis Program.