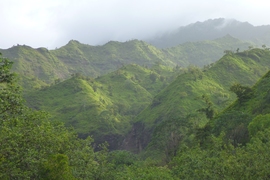 ↓ Download Image
Caption: This image was taken in the Hanalei River basin on the north side of the Hawaiian island of Kauai.
Credits: Photo courtesy of the researchers 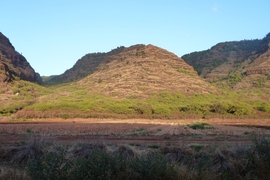 ↓ Download Image
Caption: This photograph was shot near Polihale, on the west side of the island.
Credits: Photo courtesy of the researchers

Caption:
This image was taken in the Hanalei River basin on the north side of the Hawaiian island of Kauai.
Credits:
Photo courtesy of the researchers
If you’ve ever stood on a hill during a rainstorm, you’ve probably witnessed landscape evolution, at least on a small scale: rivulets of water streaming down a slope, cutting deeper trenches in the earth when the rain turns heavier.

It’s a simple phenomenon that scientists have long believed applies to large-scale landforms as well — that is, rivers cut faster into mountains that receive heavier precipitation. It’s thought that if rainfall patterns influence how rivers cut into rock, over time, the cumulative erosion and its effects on rock deformation can ultimately control how entire mountain ranges take shape. However, this seemingly intuitive theory — that precipitation influences how quickly landscapes erode — has been difficult to verify, because many other factors, such as rock strength and tectonic-plate motions, can also influence erosion rates. 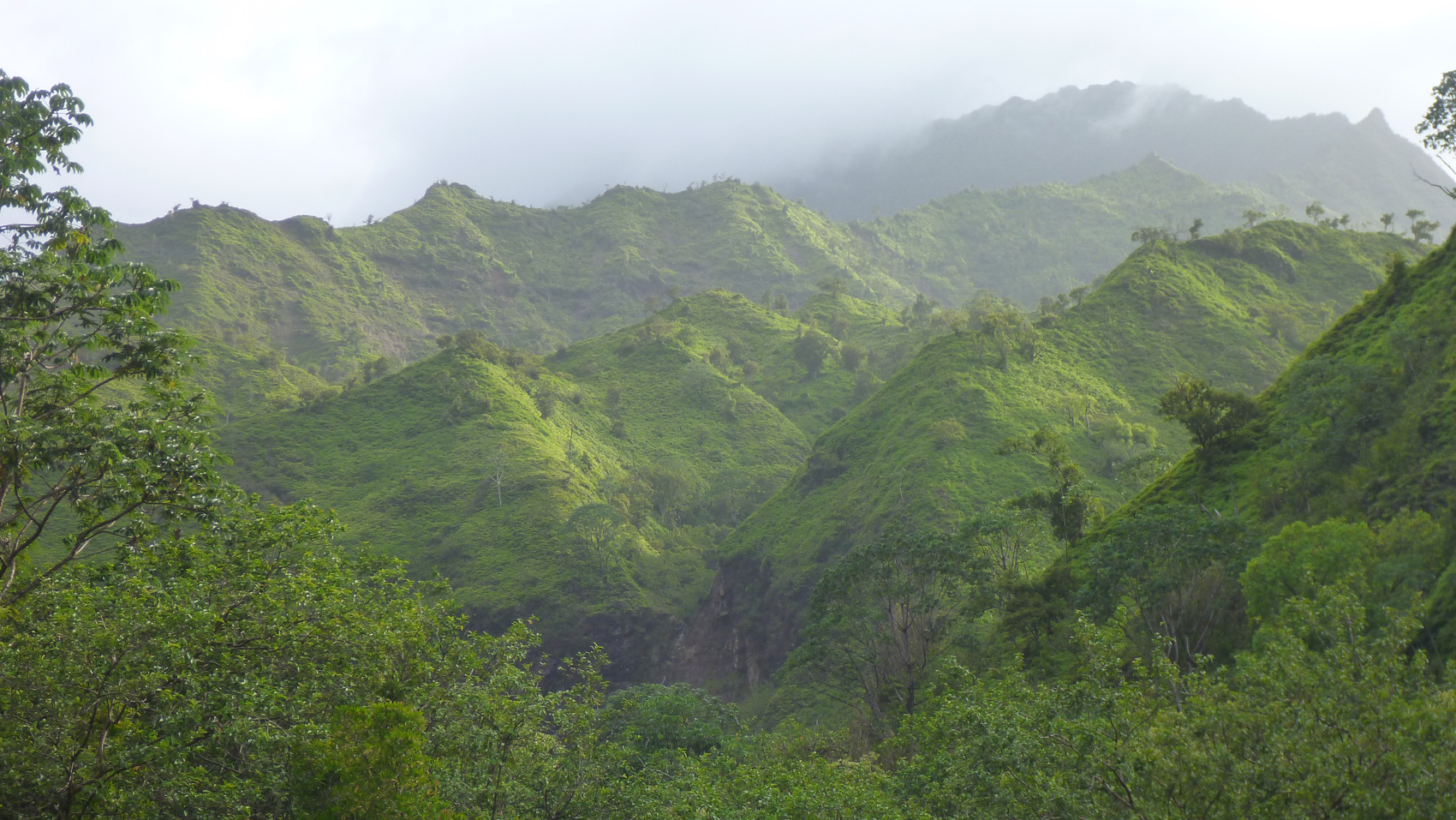 These photographs were both taken in June 2012, about 30 kilometers (about 20 miles) apart. This greener image was taken in the Hanalei River basin on the north side of the Hawaiian island of Kauai. Photo courtesy of the researchers 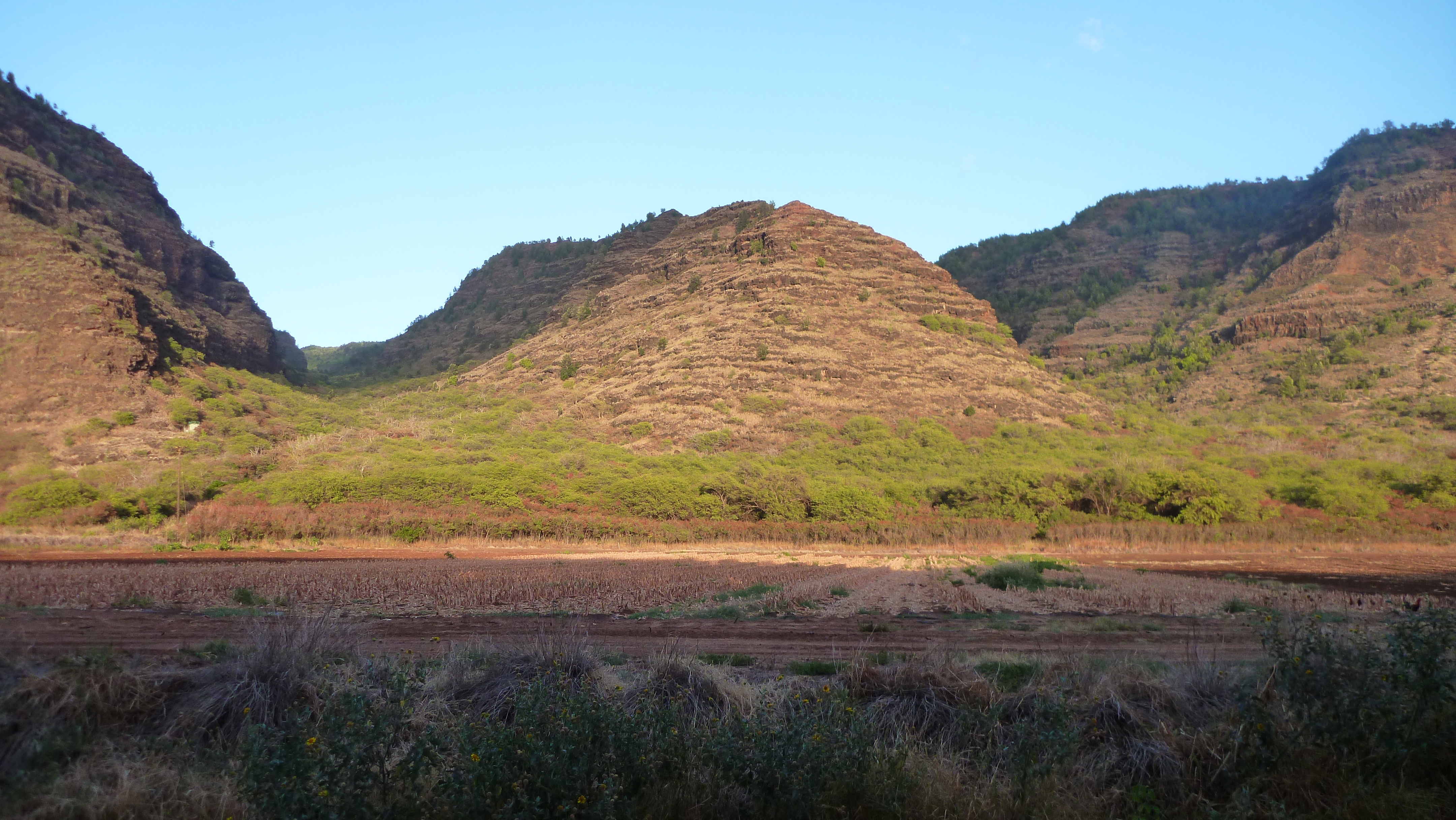 This photograph was shot near Polihale, on the west side of the island.Photo courtesy of the researchers

Now researchers in MIT’s Department of Earth, Atmospheric and Planetary Sciences (EAPS) have tested this theory by studying the relationship between precipitation and erosion on the Hawaiian island of Kauai, which has one of the world’s steepest gradients in annual rainfall. The center of the island receives more than 9 meters (about 350 inches) of rain per year, while its shores remain relatively dry, with as little as half a meter (about 20 inches) of rainfall annually.

The researchers charted the island’s precipitation and estimated how much land has eroded over Kauai’s 4-million-year history. They found a clear pattern: The more rain a region receives, the more efficiently its rivers cut into rock, forming deep canyons in the wettest areas. The group used these measurements to test a widely used but rarely tested mathematical formula for erosion, and found that when they factored precipitation rates into the equation, they could accurately predict how rivers carved out the island over time.

“We now have empirical support for an idea that has been around for a while,” says Ken Ferrier, who led the study while a postdoc at MIT and is now a postdoc at Harvard University. “That idea is that precipitation really should affect how quickly rivers cut through rock, which has many implications for how landscapes evolve.”

Ferrier published the results of the study this week in the journal Nature. The study’s co-authors are MIT graduate student Kimberly Huppert and Taylor Perron, the Cecil and Ida Green Assistant Professor of Geology in EAPS.

Rain versus the volcano

According to the researchers, Kauai’s steep rainfall gradient and uniform volcanic rock make it an “exceptional natural laboratory” for testing the relationship between precipitation and erosion. Wind patterns sweep rain clouds from the ocean toward the peak of the island’s volcano, where they rain out most of their moisture before passing over the rest of the island. As a result, annual rainfall is highest in the island’s center, with a dramatic drop-off toward the coasts, and is also higher on the side of the island that faces the wind. If rainfall indeed has an effect on erosion, the team reasoned, then the island’s erosion rates should exhibit a similarly dramatic pattern.

To test their theory, the researchers first looked at Kauai’s current topography, which features large canyons funneling into the middle of the island, with smaller valleys on the outskirts. They then created a map of what the island looked like when it first formed more than 4 million years ago, before erosion altered its surface. To do that, the researchers identified gently sloping, nearly planar surfaces around the island that likely are remnants of the volcano’s original terrain. They then used a simple mathematical equation to, in essence, stretch the remnant surfaces together into a roughly conical shape — what Kauai’s topography likely resembled when the island first formed.

Ferrier and his colleagues then measured the difference between the modern topography and this reconstructed topography to estimate the amount of rock eroded over time — and divided this difference by the age of the uppermost volcanic flows to calculate an erosion rate. The researchers performed this exercise for more than 13,000 locations along 32 rivers throughout the island, measuring the erosion rates along each river. They then plotted these erosion rates against precipitation rates across the island and found that, after correcting for each river’s steepness and the size of its drainage basin, rivers that received more rainfall eroded the land faster than those with less rain.

The researchers compared their measured erosion rates to a mathematical equation widely used to predict a river’s erosion rate. This equation attributes the erosion rate to the river’s steepness and the rate of flow through its channel, but the flow rate is typically assumed to depend only on the size of the river’s drainage basin, ignoring spatial differences in rainfall. Other factors that might influence erosion rate, but which are not explicitly included in this equation, include the type of rock being eroded and the kinds of vegetation in the area.

Sean Willet, a professor of geology at the Swiss Federal Institute of Technology in Zurich, says the group’s greatest strength was in its choice of experimental setting.

“In earth sciences, we cannot simulate many of these things in the laboratory; we have to go out in the field and find naturally occurring experiments,” Willet says. “The study they did in Kauai did this beautifully. They found a place on the Earth where we knew much about what the original landscape looked like, we had a fantastic change in the climate where the rainfall went from half a meter to 9 meters over a few kilometers, and they used that as a naturally occurring experiment in order to quantify these processes. And to me, that’s really what made this a valuable contribution.”

“This is exciting because it shows that some bold ideas that have been proposed about landscapes are probably right,” Perron says. “For example, if it rains more on one side of a mountain range, it might actually make the mountain range asymmetric and change its width. Just by changing atmospheric processes, you can change how the solid Earth is deforming. Now there is some empirical support for these ideas.”