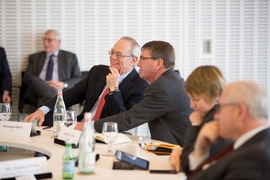 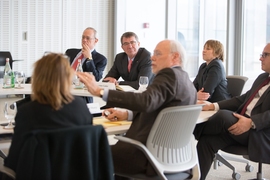 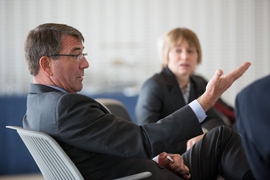 ↓ Download Image
Caption: Referring to the MIT community in Cambridge, Carter observed that “There is something about proximity that matters … which is why this area is so important.”

Caption:
Referring to the MIT community in Cambridge, Carter observed that “There is something about proximity that matters … which is why this area is so important.”
Credits:
Photo: Bryce Vickmark

U.S. Secretary of Defense Ashton Carter visited MIT on Wednesday, engaging with Institute President L. Rafael Reif and faculty in a roundtable discussion about cutting-edge innovation in industries such as biotechnology, health care, and energy.

“I want to make sure we maintain and strengthen our bridges” to MIT, Carter said in his remarks at the event, while emphasizing the value of the “diversified ecosystem” of innovation around Kendall Square and Massachusetts generally.

A primary focus of the event was the need to encourage high-tech innovation in not only software but hardware — that is, tangible, physical products, which are often developed more slowly than software products, and for which, as a consequence, critical funding is often in short supply.

“Both are important,” said Reif, referring to software and hardware in his own remarks during the discussion. But on the hardware side, he added, “it often takes 10-plus years” to bring an idea from the lab to the marketplace. The result is that valuable innovations can languish in labs, and startup firms with good ideas may fail to gain traction, for lack of backers.

“That’s an issue that has to be addressed,” Reif said.

For its part, MIT is seeking to create “innovation orchards” where researchers, entrepreneurs, and capital can combine to help valuable new products grow. For example, it recently founded a new Institute-wide Innovation Initiative intended to help spark high-tech growth.

Advances in fuel, cancer medicine, and batteries — from one lab

A significant part of Carter’s visit to MIT involved faculty presentations about ongoing research. Angela Belcher, the W.M. Keck Professor of Energy at MIT, outlined several advances her lab has developed, including a process that turns the greenhouse gas methane into liquid fuel; a new approach to the imaging of ovarian cancer tumors, which may go into clinical trials within the next year; and lightweight, flexible batteries.

Carter said he wanted the Department of Defense to “reach” for new ways of backing advances in medicine and biotechnology. As such, multiple faculty presentations focused on bioscience. Biologist Phillip Sharp, an Institute Professor at MIT, a member of the Department of Biology and the Koch Institute for Integrative Cancer Research, and a Nobel laureate in medicine, discussed the growth of biomedical research at the Institute, noting that one-third of all engineers at MIT are now involved in the life sciences. And genomics research, Sharp added, is “just at the edge of its impact” in medicine, due to the growth of high-speed genomic sequencing.

Nanotechnology expert Valdimir Bulović, the Fariborz Maseeh Professor of Emerging Technology and the MIT School of Engineering’s associate dean for innovation, discussed how MIT’s massive new nanotechnology lab, MIT.nano — currently under construction — may create a similar convergence. Nanotechnology, Bulović said, is entering its “Renaissance Age,” with applications that can be used in energy, medicine, and manufacturing broadly, since the product-making tools in other areas may rely on nanoscale fabrication.

“The future of our research is around nanotechnology,” Bulović said.

Other presentations at the event were made by neurobiologist Ed Boyden; robotics expert and Andrew and Erna Viterbi Professor Daniela Rus; and materials scientist Krystyn Van Vliet, who talked about MIT’s efforts to bolster advanced manufacturing in the U.S., which date back several years. President Reif co-chaired the executive committee of the White House’s Advanced Manufacturing Partnership 2.0, which delivered its final report in 2014.

Before the roundtable, members of Secretary Carter’s staff took a tour of the MIT Media Lab, where the roundtable was hosted, and saw presentations by Media Lab faculty and students, including Alex Pentland of the Human Dynamics Lab; Deb Roy of the Laboratory for Social Machines; Albert Redo-Sanchez of the Camera Culture Group; and Luke Mooney of the Biomechatronics group.

Carter’s interest in defense-related research comes in part from his substantial working knowledge of both academic scholarship and defense needs. He earned a PhD in theoretical physics from Oxford University after receiving a joint undergraduate degree in physics and history from Yale University. Carter served as a fellow at MIT’s Center for International Studies for two years in the 1980s and later became a faculty member at Harvard University.

During the discussion, Carter disclosed that he was familiar with MIT research on innovation ecosystems, such as political scientist Suzanne Berger’s 2013 book, “Making in America,” which detailed the research of MIT’s Production in the Innovation Economy task force, a group that studied advanced manufacturing. One of the task force’s key findings was that having research and production facilities in geographic proximity is a substantial help in many (though not all) industries.

“There is something about proximity that matters … which is why this area is so important,” Carter observed.