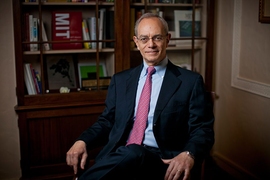 Delivering recommendations from a presidential committee he co-chaired, MIT President L. Rafael Reif addressed a forum on the future of manufacturing in the U.S. hosted by President Barack Obama at the White House on Monday.

The President’s Council of Advisors on Science and Technology issued a report from the committee, known as the Advanced Manufacturing Partnership (AMP) 2.0, outlining a series of recommendations for renewing advanced industrial production in the U.S. The proposals deal with new ways of enabling innovation, training workers, and aiding the U.S. business climate, in an effort to address the loss of manufacturing production and jobs that has occurred over most of the last three decades.

“To reverse that trend, and to compete in an intensely globalized world, we need to take a big leap forward, fueled by innovation — and we need an innovation system that can deliver new manufacturing technologies and processes to get us there,” Reif said in his remarks to Obama.

The White House also announced on Monday that it will take new measures to implement concepts outlined in the report, which describes three “pillars” for assisting in industrial growth. The first calls for prioritizing the development of advanced manufacturing technologies; creating a standing university-industry consortium to guide federal actions; developing better standards and information-sharing mechanisms in manufacturing; and establishing a strong governance structure for the growing National Network for Manufacturing Innovation.

The second facet of the report outlines measures to build a skilled workforce, from new programs in skill certification and job training, to a campaign to refurbish the image of contemporary manufacturing, in an effort to attract talent into the field.

The third part of the report involves a pair of measures to improve business conditions, especially for smaller and midsize manufacturers. One would help companies scale up operations through better access to capital and tax incentives, among other things; another would improve the flow of information about technologies, markets, and supply chains.

The new actions the White House made public on Monday include an additional $300 million of federal government funds in three advanced-manufacturing fields: production of advanced materials, advanced sensing and control, and digital manufacturing. The administration also announced a forthcoming $100 million grant competition to spur apprenticeship programs, and will develop, through the Department of Commerce’s Manufacturing Extension Partnership, a $130 million, 10-state pilot program to help small manufacturers adopt innovations and bring new products to market.

While manufacturing has shrunk as a part of the U.S. economy in recent decades, it has added more than 700,000 jobs since February 2010, the fastest pace of job growth in the sector since the 1990s.

In recent years, MIT has actively engaged with the policy side of advanced manufacturing. Former MIT President Susan Hockfield co-chaired the first iteration of AMP, from 2011 through 2012. The Institute hosted regional AMP meetings in November 2012 and May 2014, convening leaders and experts in academia, industry, and government to examine ways of bolstering the innovation economy and, in turn, economic growth.

“I know we are eager to continue to play our part in this vital effort to secure our nation’s future,” Reif added on Monday. He also discussed the subject later in the day, in a public forum at the National Academies.

Reif has co-chaired the steering committee for AMP 2.0 with Andrew Liveris, the president, chairman, and CEO of Dow Chemical Co., who has been actively involved in the effort to rebuild U.S.-based manufacturing.

A related, MIT-wide project, Production in the Innovation Economy (PIE), released a major report on the links between innovation and manufacturing in September 2013, drawing on broad research conducted by faculty and other scholars over the previous two years.

Exploding the myths of manufacturing