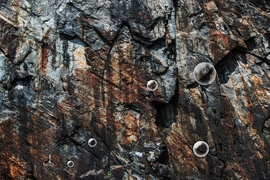 Carbon sequestration promises to address greenhouse-gas emissions by capturing carbon dioxide from the atmosphere and injecting it deep below the Earth’s surface, where it would permanently solidify into rock. The U.S. Environmental Protection Agency estimates that current carbon-sequestration technologies may eliminate up to 90 percent of carbon dioxide emissions from coal-fired power plants.

While such technologies may successfully remove greenhouse gases from the atmosphere, researchers in the Department of Earth, Atmospheric and Planetary Sciences at MIT have found that once injected into the ground, less carbon dioxide is converted to rock than previously imagined.

The team studied the chemical reactions between carbon dioxide and its surroundings once the gas is injected into the Earth — finding that as carbon dioxide works its way underground, only a small fraction of the gas turns to rock. The remainder of the gas stays in a more tenuous form.

“If it turns into rock, it’s stable and will remain there permanently,” says postdoc Yossi Cohen. “However, if it stays in its gaseous or liquid phase, it remains mobile and it can possibly return back to the atmosphere.”

Cohen and Daniel Rothman, a professor of geophysics in MIT’s Department of Earth, Atmospheric, and Planetary Sciences, detail the results this week in the journal Proceedings of the Royal Society A.

Current geologic carbon-sequestration techniques aim to inject carbon dioxide into the subsurface some 7,000 feet below the Earth’s surface, a depth equivalent to more than five Empire State Buildings stacked end-to-end. At such depths, carbon dioxide may be stored in deep-saline aquifers: large pockets of brine that can chemically react with carbon dioxide to solidify the gas.

The researchers modeled the chemical reactions between two main regions: an acidic, low-pH region with a high concentration of carbon dioxide, and a higher-pH region filled with brine, or salty water. As each carbonate species reacts differently when diffusing or flowing through water, the researchers characterized each reaction, then worked each reaction into a reactive diffusion model — a simulation of chemical reactions as carbon dioxide flows through a briny, rocky environment.

“This can basically close the channel, and no more material can move farther into the brine, because as soon as it touches the brine, it will become solid,” Cohen says. “The expectation was that most of the carbon dioxide would become solid mineral. Our work suggests that significantly less will precipitate.”

Cohen and Rothman point out that their theoretical predictions require experimental study to determine the magnitude of this effect.

“Experiments would help determine the kind of rock that would minimize this clogging phenomenon,” Cohen says. “There are many factors, such as the porosity and connectivity between pores in rocks, that will determine if and when carbon dioxide mineralizes. Our study reveals new features of this problem that may help identify the optimal geologic formations for long-term sequestration”

New research by Professor Daniel Rothman and postdoctoral associate Yossi Cohen has raised questions about the feasibility of carbon capture, reports Ken Silverstein for Forbes. The researchers found that “only a ‘small fraction’ of the carbon dioxide solidifies and turns into rock after it is injected 7,000 feet below the earth’s surface,” explains Silverstein.

MIT researchers have found that carbon sequestration may not be as effective at storing greenhouse gas emissions as originally thought, reports Christopher Martin for Bloomberg News. The researchers found that “much of the carbon dioxide will remain in its gaseous state, and may eventually escape into the atmosphere.”