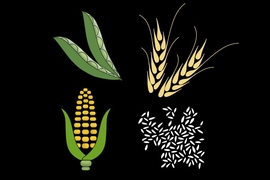 Many studies have shown the potential for global climate change to cut food supplies. But these studies have, for the most part, ignored the interactions between increasing temperature and air pollution — specifically ozone pollution, which is known to damage crops.

A new study involving researchers at MIT shows that these interactions can be quite significant, suggesting that policymakers need to take both warming and air pollution into account in addressing food security.

The study looked in detail at global production of four leading food crops — rice, wheat, corn, and soy — that account for more than half the calories humans consume worldwide. It predicts that effects will vary considerably from region to region, and that some of the crops are much more strongly affected by one or the other of the factors: For example, wheat is very sensitive to ozone exposure, while corn is much more adversely affected by heat.

The research was carried out by Colette Heald, an associate professor of civil and environmental engineering (CEE) at MIT; Amos Tai, a former CEE postdoc who is now at the Chinese University of Hong Kong; and Maria Val Martin at Colorado State University. Their work is described this week in the journal Nature Climate Change.

Heald, the Mitsui Career Development Professor in Contemporary Technology, explains that while it’s known that both higher temperatures and ozone pollution can damage plants and reduce crop yields, “nobody has looked at these together.” And while rising temperatures are widely discussed, the impact of air quality on crops is less recognized.

The effects are likely to vary widely by region, the study predicts. In the United States, tougher air-quality regulations are expected to lead to a sharp decline in ozone pollution, mitigating its impact on crops. But in other regions, the outcome “will depend on domestic air-pollution policies,” Heald says. “An air-quality cleanup would improve crop yields.”

Overall, with all other factors being equal, warming may reduce crop yields globally by about 10 percent by 2050, the study found. But the effects of ozone pollution are more complex — some crops are more strongly affected by it than others — which suggests that pollution-control measures could play a major role in determining outcomes.

Ozone pollution can also be tricky to identify, Heald says, because its damage can resemble other plant illnesses, producing flecks on leaves and discoloration.

Potential reductions in crop yields are worrisome: The world is expected to need about 50 percent more food by 2050, the authors say, due to population growth and changing dietary trends in the developing world. So any yield reductions come against a backdrop of an overall need to increase production significantly through improved crop selections and farming methods, as well as expansion of farmland.

While heat and ozone can each damage plants independently, the factors also interact. For example, warmer temperatures significantly increase production of ozone from the reactions, in sunlight, of volatile organic compounds and nitrogen oxides. Because of these interactions, the team found that 46 percent of damage to soybean crops that had previously been attributed to heat is actually caused by increased ozone.

Under some scenarios, the researchers found that pollution-control measures could make a major dent in the expected crop reductions following climate change. For example, while global food production was projected to fall by 15 percent under one scenario, larger emissions decreases projected in an alternate scenario reduce that drop to 9 percent.

Air pollution is even more decisive in shaping undernourishment in the developing world, the researchers found: Under the more pessimistic air-quality scenario, rates of malnourishment might increase from 18 to 27 percent by 2050 — about a 50 percent jump; under the more optimistic scenario, the rate would still increase, but that increase would almost be cut in half, they found.

Agricultural production is “very sensitive to ozone pollution,” Heald says, adding that these findings “show how important it is to think about the agricultural implications of air-quality regulations. Ozone is something that we understand the causes of, and the steps that need to be taken to improve air quality.”

Denise L. Mauzerall, a professor of environmental engineering and international affairs at Princeton University who was not involved in this research, says, “An important finding … is that controls on air-pollution levels can improve agricultural yields and partially offset adverse impacts of climate change on yields. Thus, the increased use of clean energy sources that do not emit either greenhouse gases or conventional air pollutants, such as wind and solar energy, would be doubly beneficial to global food security, as they do not contribute to either climate change or increased surface-ozone concentrations.”

In a piece about potential global catastrophes, Sarah Gray of Salon highlights new research from Prof. Colette Heald that indicates future global food production is threatened by climate change and air pollution. The study found that the impacts of climate change and ozone pollution on crop production could cause malnutrition rates to rise significantly in developing countries in the coming decades.

Eliene Augenbraun of CBS News examines MIT findings on the impact of climate change and pollution on crops. Prof. Colette Heald says the study explored climate and ozone effects “because we thought this was an important contrast to draw, and because these effects are better quantified.”

Greenwire reporter Amanda Peterka examines the new MIT study showing that ozone pollution could increase the impact of climate change on food supply. “The study warns that the interplay between climate change and ozone could stand in the way of meeting an expected 50 percent increase in global food demand between 2010 and 2050,” Peterka writes.

Huffington Post reporter Katherine Boehrer reports on a new study showing that ozone pollution may increase the impact of climate change on crops. “The study showed that climate change is likely to reduce crop yields at least 10 percent by 2050 from 2000 levels,” writes Boehrer.