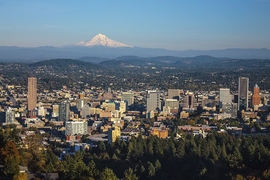 An increasing number of cities around the world now include preparations for climate change in their basic urban planning — but only a small portion of them have been able to make such plans part of their economic development priorities, according to a unique global survey of cities released today.

The Urban Climate Change Governance Survey (UCGS), based on responses from 350 cities worldwide, underscores the extent to which city leaders recognize climate change as a major challenge — even as they are trying to figure out how their responses can create jobs, growth, and cost savings in areas ranging from cities’ transportation networks to their distribution of businesses.

“Climate change isn’t an isolated issue,” says Alexander Aylett, a postdoc in MIT’s Department of Urban Studies and Planning (DUSP), and the lead author of today’s report. “It has large implications for all other aspects of urban life. What we are seeing is cities starting to build it into the DNA of how they approach urban planning.”

According to the findings, 75 percent of cities worldwide now tackle climate-change issues as a mainstream part of their planning, and 73 percent of cities are attempting both climate mitigation and climate adaptation — that is, they are trying both to reduce emissions of greenhouse gases and to adapt to long-term changes that are already in motion. But only 21 percent of cities report tangible connections between the response to climate change and achieving other local development goals.

Urban planners in Alberta, as Aylett notes, have studied the cost savings associated with limiting metropolitan sprawl and concluded that denser development could save $11 billion in capital costs over the next 60 years, and $130 million in annual maintenance. But most cities, he suggests, have simply not yet identified ways to link climate planning and economic development in the first place.

“It isn’t so much that it’s hard to reconcile economic and environmental priorities,” Aylett says. “It’s that we’re not trying.”

The new report is a companion to a survey conducted in 2012. This year’s results revealed continuing regional disparities in urban climate planning. Compared with the global average of 75 percent, U.S. cities lag in planning for both mitigation and adaptation, with just 58 percent of cities addressing both. This echoes the 2012 survey, which revealed that a smaller portion of U.S. cities were doing basic climate-change planning, compared with those in other regions — 59 percent in the U.S., for instance, compared with 95 percent in Latin America.

Globally, 63 percent of cities say they have between one and five employees dedicated to climate-change planning; North American cities are most likely to have just one staff member focused on the topic. As the report’s executive summary notes, “A lack of funding to hire sufficient staff to work on climate change is a significant challenge for 67 percent of cities.”

On a different note, about 85 percent of cities have conducted an inventory of local greenhouse-gas emissions, and 15 percent, as part of that effort, have tried to track the emissions that stem from goods and services consumed within that city. As Aylett points out, “Beginning to address these upstream emissions is crucial if cities are really going to help bring down global emissions.”

The results also reveal that local industries and businesses are relatively disengaged with urban responses to climate change: About 25 percent of cities say that local businesses have been crucial to creating and implementing their climate mitigation plans, whereas 48 percent of cities report that local civil-society groups, such as nonprofits or other organizations, have been involved in climate planning.

The survey is a collaboration between DUSP and ICLEI, the world’s largest association of cities. Today’s report is being released in conjunction with an ICLEI-backed conference on urban planning, being held in Bonn, Germany. To conduct the survey, questionnaires were sent to officials in more than 700 cities worldwide, with 48 percent of them responding to a set of 69 queries.

Other scholars believe the UCGS results are valuable. John Robinson, a professor of geography at the University of British Columbia, calls the survey “extremely important and extremely useful.” In particular, Robinson says, an “important issue raised by this work is what the connection is between framing these responses in terms of climate change and framing them in terms of broader conceptual frameworks, such as sustainability.” Promoting the general idea of sustainable development in urban areas, he adds, may be “most helpful in mainstreaming climate policy.”

The full report can be found at www.urbanclimatesurvey.com.