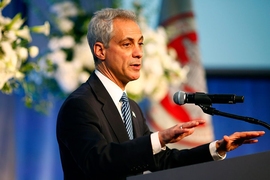 Cities face much of the burden of preparing for global changes — whether climate shocks, rapid population growth, or population decline, when industries relocate. Beneath every skyline, a city’s leaders and residents must judge how much infrastructure they will need to move people around, resist natural disasters, and spur growth.

A wide variety of planners, politicians, and technologists discussed the urban backbone of the future at MIT on Thursday and Friday, during the “Scaling Infrastructure” conference hosted by the Center for Advanced Urbanism (CAU). From Chicago Mayor Rahm Emanuel’s warning that the world’s water supply will become its biggest source of contention for the next generation to extended discussions about natural disasters, transportation, and clean energy, the event underscored the breadth of the problems urbanists are now expected to address.

Planners already seem to be thinking about infrastructures that are “smaller, mutually independent, [yet] reinforcing,” to meet the dual challenges of sustainability and resilience, noted Alexander D’Hooghe, an associate professor of architecture and urbanism, and CAU’s director, in his opening remarks. Alan Berger, a professor in MIT’s Department of Urban Studies and Planning (DUSP), suggested that research might provide innovations that are “flexible, adaptable, and scalable, perhaps even down to individual preferences,” especially in the areas of energy and transportation.

If infrastructure takes the form of smaller, adaptable networks, it will partly be a response to the scope of climate-driven problems, which can cripple large-scale, centralized infrastructure networks that support energy, communications, water, and waste treatment.

“Climate change will change our landscapes in a big way,” said Sonja Beeck, a conference panelist and planning consultant in Germany.

Emanuel touched on the salience of natural resource issues during his keynote talk at the conference’s opening session on Thursday.

“Water, and access to water, will be the biggest debate around the world in the next 20 to 25 years,” said Emanuel, noting that Chicago has taken steps to improve its water system.

Many of Emanuel’s remarks dealt with education and economic growth. As he pointed out, no single business sector accounts for more than 13 percent of Chicago’s economy. That means a robust infrastructure is necessary to help Chicago compete globally across sectors. Investment in Chicago O’Hare International Airport, which is adding runway capacity, will help maintain Chicago’s status as “the inland port of America,” he said.

Infrastructure improvements also relate strongly to the quality of life in the city. Emanuel iterated a list of five things he believes every neighborhood should have — a library, parks and playgrounds, public transportation, schools, and safety — that constitute a significant part of its own public infrastructure. Those assets help families, he noted, but can also attract mobile professionals who work in knowledge-intensive industries.

“Research drives a huge amount of economic growth in a city,” Emanuel said, adding: “It would be great if the country would dedicate 3 percent of its GDP to basic research.”

Chicago has also added bike lanes and operates a popular bike-sharing program. Those things could be complemented by another form of infrastructure, Emanuel observed: showers in office buildings, so that more professionals could use bike paths to commute.

Other cities, however, are not growing, but downsizing. Dayne Walling, the mayor of Flint, Mich. — which has suffered high-profile problems following the closure of auto plants — recently helped Flint complete its first comprehensive planning document since 1960. The city is dismantling unused buildings that carry maintenance costs; as a result, Walling said, Flint could become “more green and also more dense.” Parkland could replace old industrial areas while a larger portion of the population would live in proximity to civic assets.

Money for new investments in Flint, Walling noted, remains “extraordinarily scarce.” But in general, suggested Nancy Levinson, editor of Places Journal, we have too readily “naturalized the dismissal of the federal role” in local growth, allowing low expectations to let Washington off the hook for a lack of support for urban projects.

Will Generation Y move to the suburbs?

CAU, founded in 2012, is a multidisciplinary group within MIT’s School of Architecture and Planning (SA+P) that engages in research projects and provides a platform for discussion such as the “Scaling Infrastructure” conference. In the process, Berger said on Friday, one of its goals is to “improve equity and well-being” in cities around the world.

The conference also featured talks by several industry researchers. Ken Laberteaux, a senior principal scientist at the Toyota Research Institute-North America, examined the future of traffic infrastructure by noting the oft-stated trend toward less driving by urban- members of so-called Generation Y, those born starting in the mid-1980s.

While this trend is often cast as a cultural change, Laberteaux noted that markedly fewer Generation Y members, compared with preceding generations, are getting married by age 28. Perhaps Generation Y, buffeted by economic uncertainty, he said, is just taking longer to settle down and move to suburban settings.

In that case, Laberteaux said, many members of Generation Y will eventually increase their driving, and we “should be focused on how to make low-density, nonurban lifestyles a much more sustainable approach.” Laberteaux cited more fuel-efficient vehicles as one technology that will be necessary, but also hailed relatively dense, energy-efficient neighborhoods — such as Pecan Street in Austin Tex., the West Village area of Davis, Calif., and even the experimental Toyota City project in Japan — as welcome advances in suburban form.

We should put infrastructure questions in perspective, suggested James Westcoat, a historian of water systems in SA+P, and consider what civic and social values, and which interests, these technologies are meant to serve at any point in history.

“Infrastructure is often defined as a means to an end,” Westcoat said, urging the audience to ask: “Toward what ends? What are the aims of infrastructure?”