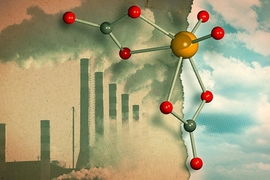 ↓ Download Image
Caption: This illustration features a new catalyst developed at MIT which consists of a molybdenum atom (yellow) bound to four oxygen atoms (red). This complex, known as molybdate, binds two molecules of carbon dioxide (carbon atoms are gray), which can later be released to create organic compounds.

Caption:
This illustration features a new catalyst developed at MIT which consists of a molybdenum atom (yellow) bound to four oxygen atoms (red). This complex, known as molybdate, binds two molecules of carbon dioxide (carbon atoms are gray), which can later be released to create organic compounds.

MIT chemists have devised a way to trap carbon dioxide and transform it into useful organic compounds, using a simple metal complex.

More work is needed to understand and optimize the reaction, but one day this approach could offer an easy and inexpensive way to recapture some of the carbon dioxide emitted by vehicles and power plants, says Christopher Cummins, an MIT professor of chemistry and leader of the research team.

“Ideally we’d like to develop carbon-neutral cycles for renewable energy, to get carbon dioxide out of the atmosphere and avoid pollution,” Cummins says. “In addition, since producers of oil have lots of carbon dioxide available to them, companies are interested in using that carbon dioxide as an inexpensive feedstock to make value-added chemicals, including things like polymers.”

The new reaction transforms carbon dioxide into a negatively charged carbonate ion, which can then react with a silicon compound to produce formate, a common starting material for manufacturing useful organic compounds. This process, which the researchers describe in the journal Chemical Science, relies on a very simple molecular ion known as molybdate — an atom of the metal molybdenum bound to four atoms of oxygen.

Scientists have long sought ways to convert carbon dioxide to organic compounds — a process known as carbon fixation. Noble metals such as ruthenium, palladium, and platinum, which are relatively rare, have proven effective catalysts, but their high price makes them less attractive for large-scale industrial use.

As an alternative, chemists have tried to make abundant metals, such as copper and iron, behave more like one of these powerful catalysts by decorating them with molecules that alter their electronic and spatial properties. These molecules, known as ligands, can be very elaborate and usually contain nonmetallic atoms such as sulfur, phosphorus, nitrogen, and oxygen.

With most of those catalysts, the carbon dioxide binds directly to the metal atoms. Cummins was curious to see if he could design a catalyst where the carbon dioxide would bind to the ligand instead. “That would set the stage for chemical transformations of carbon dioxide that might be different from what people had seen before,” he says.

After finding some success with metal complexes consisting of either niobium or titanium bound to ligands consisting of large organic molecules, Cummins decided to try something simpler, without unwieldy ligands. “It occurred to me that there was no reason why these bulky organic ligands would be a requirement for carbon dioxide binding. I wanted to see if we could find something really simple that would exhibit similar reactivity,” he says.

Molybdate, which is relatively abundant and stable in air and water, seemed like it could fit the bill. A simple tetrahedron with four atoms of oxygen bound to a central molybdenum atom, molybdate is commonly used as a source of molybdenum, which can catalyze many types of reactions. Until now, no one had studied its interactions with carbon dioxide.

Working with molybdate dissolved in an organic solvent that also contained dissolved carbon dioxide, the researchers found that the ion could bind to not one, but two molecules of carbon dioxide. The first carbon dioxide attaches irreversibly to one of the oxygen atoms bound to molybdenum, creating a carbonate ion.

A second molecule of carbon dioxide then binds to another oxygen atom, but this second binding is reversible, which could enable potential applications in carbon sequestration, Cummins says. In theory, it could allow researchers to create a cartridge that would temporarily store carbon dioxide emitted by vehicles. When the cartridge is full, the carbon dioxide could be removed and transferred to a permanent storage location.

Another possible application would be transforming the carbon dioxide to other useful compounds containing carbon. Cummins and his colleagues showed that the trapped carbon dioxide could be converted to formate by treating silicon-containing compounds called silanes with the molybdate complex.

“This is a really elegant addition to the carbon dioxide fixation literature because it shows that some really beautiful transformations are achievable without an elaborate ligand system,” says Christine Thomas, an associate professor of chemistry at Brandeis University who was not involved in the research.

More research is needed before the reaction can become industrially useful, Cummins says. In particular, his lab is investigating ways to perform the reaction so that molybdate is regenerated at the end, allowing it to catalyze another reaction.

“The big advance of the present work is just showing that molybdate takes up carbon dioxide in the way that it does, and illustrating in detail the structures that are produced by addition of carbon dioxide to molybdate,” Cummins says. “Hopefully it’s going to be a little bit thought-provoking and cause people to take a step back and consider just what we’re going to need to do.”