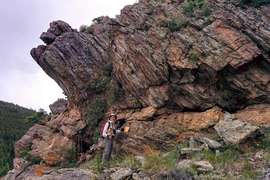 ↓ Download Image
Caption: A rock outcrop in Gordon Gulch, Colo., with Stephen Martel of the University of Hawaii pictured in the foreground.
Credits: Photo: Taylor Perron

Caption:
A rock outcrop in Gordon Gulch, Colo., with Stephen Martel of the University of Hawaii pictured in the foreground.
Credits:
Photo: Taylor Perron

Just below Earth’s surface, beneath the roots and soil, is a hard, dense layer of bedrock that is the foundation for all life on land. Cracks and fissures within bedrock provide pathways for air and water, which chemically react to break up rock, ultimately creating soil — an essential ingredient for all terrestrial organisms. This weathering of bedrock is fundamental to life on Earth.

Now scientists at MIT, the University of Wyoming, and elsewhere have found a way to predict the spatial extent of bedrock weathering, given a location’s topography. The results are published today in the journal Science.

The group sought to estimate the depth to which bedrock is broken up, or fractured. This fractured rock forms the base of a layer scientists have dubbed Earth’s “critical zone,” where the interaction of rock, air, and water allows life to thrive.

The group developed a model that estimates the thickness of this critical zone, given the forces generated by topography, gravity, and plate tectonics. The researchers found that if a landscape is undergoing little tectonic compression, the fractured zone should parallel the overlying topography, like layers of lasagna. If, however, a region is under high tectonic compression, the fractured zone will resemble a mirror image of the landscape — thicker beneath ridges, and thinner under valleys.

To test the model’s predictions, the researchers went to three sites in the United States with varying tectonic forces. In each location, they took extensive seismic and electrical conductivity measurements to gauge the extent of fracturing in the underlying bedrock. They found that their measurements matched well with their model’s predictions.

Seulgi Moon, a former MIT postdoc and a co-author of the paper, says the model may be used to better understand how Earth’s critical zone functions, and how it may shape the diversity of terrestrial life in the future. The model may also have applications for human development.

“[The model] will help us estimate mechanical properties of the bedrock,” says Moon, who is now an assistant professor of geology at the University of California at Los Angeles. “When you design building codes, this can give some idea of how susceptible an area may be to landslides and earthquakes.”

See how researchers can predict the extent of bedrock weathering based on a location's topography.

While geologists have suspected that a region’s topography might influence the fracturing of its bedrock, there had been few attempts to test this idea with field measurements.

“The calculations that had been done were on idealized landforms,” says

Taylor Perron, an associate professor of geology in MIT’s Department of Earth, Atmospheric and Planetary Sciences. “Imagine a single ridge or valley with no surrounding topography. That’s a problem you can do on paper, but it’s not the same as having a real landscape, where you have multiple ridges and valleys with irregular shapes.”

Perron and Moon created a procedure to numerically model the stresses underneath real, three-dimensional topography. The model computes the local effect of topography on gravitational forces due to the weight of overlying rock, and regional forces associated with the push or pull of tectonic plates.

“If you’re underneath a ridge, versus under a valley, the rock there should feel different stresses,” Perron says.

The model takes these stresses into account to determine whether and to what extent bedrock will crack under the pressure associated with a given landscape’s topography.

Conversely, in scenarios with high compression, the modeled fractured zone resembled a mirror image of the topography, being thicker under ridges, and thinner below valleys.

To test the model, the group teamed up with researchers at the University of Wyoming who measure seismic waves in bedrock. As Perron explains, the speed at which seismic waves travel through rock can provide data on the mechanical state of the rock: Seismic waves move faster through solid rock, and slower through rock containing many fractures filled with air, water, or weathered material such as clay.

Perron, Moon, and the Wyoming group analyzed seismic surveys of sites with different amounts of tectonic compression in Colorado, South Carolina, and Maryland. They also measured electrical conductivity, another measure of the abundance of fractures filled with water or clay.

Based on their measurements, Perron and Moon found that the fractured zone of bedrock in all three sites matched the profiles predicted by their model. They confirmed these results by looking at pictures taken within boreholes. Such pictures of bedrock, at depth, gave the researchers further confirmation that the seismic and conductivity measurements did indeed reveal fractured zones.

“The presence of topography, and how that interacts with gravity and tectonics, actually makes a difference in the fracturing and weathering of the rock,” Perron says. “In order for life to gain a foothold in landscapes, you really have to break the rock apart and weather it. Fracturing the rock is the first step in creating this critical zone.”

This research was funded, in part, by the Army Research Office.

Tracing the evolution of a landscape

The hills are evolving