Bringing “cultural diplomacy” to the classics 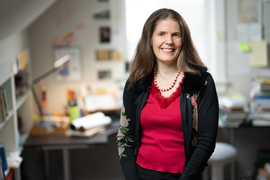 ↓ Download Image
Caption: “I came to MIT because it's such a distinctive place in terms of the humanities,” says Wiebke Denecke, a professor in MIT’s literature program, and an expert on premodern East Asia.
Credits: Photo: Bryce Vickmark 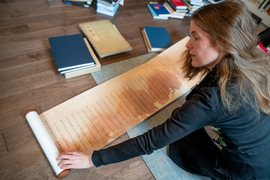 Caption:
“I came to MIT because it's such a distinctive place in terms of the humanities,” says Wiebke Denecke, a professor in MIT’s literature program, and an expert on premodern East Asia.
Credits:
Photo: Bryce Vickmark

People often put national boundaries around the written word. If you read French poetry or Victorian novels, it is tempting to understand those texts strictly in relation to the history and culture of France or Britain. Yet it often helps to take a wider view about literary production.

Consider that for many centuries, Chinese provided a common language of literary elites in China, Japan, Korea, and Vietnam. Into the 19th century, writers across East Asia were producing their work specifically in classical Chinese, an ancient form of writing in which each character denotes a word, not a sound.

Then, with the global tide of modern nationalism, many of those older works became marginalized in the public sphere. But in recent years, that trend has begun changing, according to Wiebke Denecke, a professor in MIT’s literature program, and an expert on premodern East Asia. More scholars are again diving into older works written in classical Chinese.

“With the rehabilitation of literary Chinese, a whole field has emerged, a paradigm change in Japanese studies [among others] now,” says Denecke.

Certainly, if Denecke has anything to do with it, that paradigm change will continue. Her work analyzes these older periods of East Asian history — largely from 1200 B.C.E. to 1200 C.E. — and is highly comparative in nature. Denecke has published two books, many scholarly articles, edited numerous volumes, and has worked vigorously as an editor to anthologize the classical literature of East Asia, making it more readily accessible for many readers.

“In many ways, my mission is that I hope at some point, perhaps in my lifetime, when people hear, ‘Oh, that person is a classicist,’ they will not think of Homer or Ovid, but they might think of Confucius, they will think of the ‘Tale of Genji,’ the masterpiece of Japanese literature, or they might think of people like [Korean poet] Kim Si-seup,” Denecke says.

Denecke joined MIT full-time in 2021, having previously been on the faculty at Boston University and, before that, at Barnard College/Columbia University. She brings to the Institute scholarly projects that fit MIT’s global outlook, along with a clear goal of transmitting her international, historically minded perspective to the Institute’s students and the general public.

“I came to MIT because it’s such a distinctive place in terms of the humanities,” Denecke says.

As an undergraduate, Denecke attended the University of Göttingen, in her hometown in Germany, and started studying medicine. But an extended trip to China and Japan as a medical student helped her learn Chinese and Japanese, and provided the impetus for a change. Already interested in East Asia, now Denecke made it central to her studies.

Denecke also received an MA from Göttingen in multiple disciplines — sinology, Japanese studies, philosophy, and the history of medicine — and then decided to pursue a doctorate, earning her PhD in 2004 from Harvard University, in the Department of East Asian Languages and Civilizations. Following that, Denecke spent two years as a Mellon Fellow at the Society of Fellows in the Humanities at Columbia University, before taking her first faculty position, at Barnard.

Denecke has been a highly productive scholar. Her first book, “The Dynamics of Masters Literature: Early Chinese Throught from Confucius to Han Feizi,” published by Harvard University Press, examines a rich body of Chinese texts from the 5th through the 2nd centuries C.E., making the case that many scholars have misevaluated these works as “philosophy” in a familiar Western sense. Instead, Denecke thinks, these writings are better placed in a Chinese tradition of “masters literature” — the term is now commonly used — oriented around a single figure’s wisdom.

“It’s a form of literature that talks about … political philosophy and ethics, the good life, how do you govern well, or how do you retreat from it, for the contemplative life,” Denecke says. “But in many ways, [it is] very different, [and] centered around a charismatic kind of masters figure.”

Moreover, she adds: “Since Plato there’s a real age-old struggle between philosophers and poets in the Greco-Roman and European tradition. Not so in China … like the early Confucius says, you have to study poetry, that’s the only way to get along in life. There are ‘philosophical’ texts of these old masters that include poetry.”

Denecke soon followed with a 2014 book, “Classical World Literatures: Sino-Japanese and Greco-Roman Comparisons,” published by Oxford University Press. This comparative work examines a striking convergence in Eastern and Western intellectual history: Both Japanese and Roman literatures developed in the shadow of an older “reference culture,” namely, Chinese for Japan’s writers, and Greek for writers in the Roman world. That circumstance colors the content of Japanese and Roman texts in many ways.

However, despite some parallels between Japanese and Roman cultural production, there are many divergences as well. For starters: Rome conquered Greece, in 146 B.C.E., while Japan never similarly gained control over China.

“That’s when you started having a disjunction between political power, [of] the young Romans, and cultural power,” Denecke says. “Because it was still the great Greeks, and Romans had this inferiority complex, and you had this perplexing phenomenon [in] that you had Greek slaves teaching Roman elites. Now, that never happened in the case of China and Japan.”

New library of “literature for everybody”

Denecke is also the general series editor of the new Hsu-Tang Library of Classical Chinese Literature, published by Oxford University Press and established through a gift from Agnes Hsu-Tang and Oscar Tang. The series is akin to a Chinese-literature version of the Loeb Classical Library, the Harvard University Press series that has made Greek and Roman texts available in pocket-sized editions for over a century.

Denecke has been working extensively on the Hsu-Tang Library of Classical Chinese Literature, collaborating with translators to establish a house style that renders texts in both scholarly and eminently readable fashion for a general audience.

“Accessibility, the idea that this is actually literature for everybody around the world and it’s pleasurable, that’s important,” Denecke says.

Centered on the humanities

One benefit of Denecke’s work is that it brings together scholars from countries with sometimes frosty relations, something she calls the “cultural diplomacy” created by academia. With a Japanese colleague she has convened dozens of scholars from Japan, Korea, and China to co-write the first ever history of East Asian literatures, a tightrope act given tensions in the region.

Bringing people together is very much on Denecke’s radar at MIT. With colleagues at MIT along with other Boston-area institutions, and collaborators worldwide, Denecke is currently spearheading a Comparative Global Humanities Initiative at MIT, seeking to establish a center that would enable scholars, students, experts, and the public to produce work with historical depth and of global scope on socially relevant topics and issues. An initial conference, “Worlds Enough and Time: Towards a Comparative Global Humanities” took place in November of 2021.

This initiative, Denecke says, would be a “catalyst for deep forms of collaborative creation in the humanities,” with an international, interdisciplinary orientation. For Denecke, who also calls herself a “human memory activist,” including historically oriented projects in the center’s activities is especially crucial at a moment when nationalist movements often distort or erase history in the service of creating favorable political narratives.

At a time when many global crises demand a better understanding of our societies, when humanities funding is waning in many places, Denecke thinks that adding to MIT’s strengths in humanistic knowledge and adapting the humanities to the challenges of our age, especially in the area of social justice, is a worthy ideal.

“To spearheard an initiative that conceives of the humanities of the future at one of the most future-oriented and visionary institutions in the world, I think that’s also why I came to MIT, to give it a shot,” Denecke says, adding: “The humanities are more important than ever.”

Portal to another world

3 Questions: Sandy Alexandre on the literary roots of technological innovations