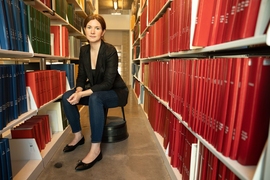 ↓ Download Image
Caption: MIT literature professor and classicist Stephanie Frampton has become a leading global expert on the interplay between physical forms of writing and the generation of literature and learning in ancient times.
Credits: Images: Bryce Vickmark

Caption:
MIT literature professor and classicist Stephanie Frampton has become a leading global expert on the interplay between physical forms of writing and the generation of literature and learning in ancient times.
Credits:
Images: Bryce Vickmark

At one point in Ovid’s “Tristia,” a series of elegies about the poet’s exile from Rome at the hands of the Emperor Augustus, he deploys an unusual literary device: A book written by Ovid becomes the narrator, representing Ovid’s own hopes for a lasting return to Roman public life.

First the book goes to a “high and shining temple” — Augustus’ own library — but is ordered to leave. The book tries to enter another library and is barred as well. Then it visits a third, without luck.

However, the book reflects, “since a public resting-place is closed to me, may it be granted me to lie hidden in some private spot” — a private book collection, where Ovid’s work might live on. “You too, hands of the people, receive, if you may, our verses dismayed by the shame of their rejection.”

A strong grasp of Ovid’s imaginative flight in the “Tristia” requires both literary analysis and knowledge of the material culture of Roman writing. Indeed, it helps to have the background of MIT literature professor and classicist Stephanie Frampton. Over the last decade, Frampton has become a leading global expert on the interplay between physical forms of writing and the generation of literature and learning in ancient times.

Knowing the history of the Roman book, for starters, can help with understanding the “Tristia.” When Ovid was writing it, around 10 C.E., there were three “public” libraries in Rome — not open to everyone, but places where books could circulate. Those books, incidentally, were usually papyrus scrolls, whose physical existence was tenuous, depending on those scrolls being copied and recopied over time.

Even in less fraught circumstances, then, “authors in antiquity were incredibly sensitive to the fact that their survival was dependent on the maintenance of their works in physical form,” as Frampton writes in her 2019 book “Empire of Letters,” a close study of materiality and writing in the Roman world.

But as Frampton also shows, Ovid’s tale contains a twist, involving his hope, expressed in the poems, that his words might live on as inscriptions in stone. And not only has the “Tristia” survived in book form, but lines from the “Tristia” have been found as inscriptions from modern Bulgaria to the Gulf of Naples. An existing epitaph on a tomb in Rome also draws heavily on Ovid.

“It is in this material record — the visible, physical traces of the ancient world — that perhaps we can come closest to our exiled author, and certainly to his everyday readers,” Frampton writes.

Certainly Frampton’s interest in that material record also underscores the innovative, interdisciplinary nature of her scholarly method. Her work draws upon not only literary analysis and book and manuscript studies, but linguistics, philology, papyrology (the study of papyrus scrolls), and eipgraphy (the study of inscriptions).

Frampton is now working on her next book, with the working title, “Cicero’s Library: The Roman Book and the Making of the Classics.” In this project, which Frampton describes as “the history of classics as seen through book collections,” she explores the advent of the personal library in Rome, as both a status symbol and a collecting practice that helped shaped a new literary canon. (Cicero, who was the first to use the Latin word for “book collection,” is one focal point).

“The question of the book is, what were the classics of the ancient world and how did they come to be?” Frampton says.

She is currently focused on the new book project during the 2019-20 academic year as the recipient of the Frances A. Yates Long-Term Fellowship at the Warburg Institute in London, a leading center for the study of cultural and intellectual history. For her scholarship and teaching, Frampton was awarded tenure at MIT in 2019.

Frampton’s scholarly interest in studying the classics has many sources, one of which loops back to MIT. Her father, John Frampton, was a mathematician at Northeastern University in Boston who made a midcareer move into linguistics, often working with MIT scholars in the field.

“He was a regular in the linguistics department at MIT through my entire childhood,” Frampton recounts, adding: “Dinner conversation was always: Can you say, ‘Mary the ball did kick?’ or do you have to say, ‘Mary did kick the ball?’ … That was the environment in which I grew up, and that was really important to me.”

That interest in languages prompted Frampton to take Latin while a secondary-school student — her first sustained exposure to ancient writing. At the same time, Frampton recounts, “I was always a reader and always loved literature.” At the University of Chicago, she majored in comparative literature and wrote a senior thesis examining magical realism in the works of Ovid and in Latin American fiction of the 1960s.

Frampton moved to Harvard University’s PhD program in comparative literature, where some of her courses heightened her interest in the material culture of writing.

She earned her PhD in 2011, after completing her dissertation, “Toward a Media History of Writing in Ancient Italy,” which consisted of four discrete studies situating writing in the physical world. Some of this material became integral to “Empire of Letters.” For instance, the poet Lucretius’ “On the Nature of Things,” from around 55 B.C.E., makes the case for atomism, the notion that the world and cosmos were made up from tiny pieces of matter, not four essential elements.

By analogy, Lucretius suggested to readers, atoms were like letters of the alphabet. In Latin the word “elementa” means both atoms and letters, and likely comes from the alphabet’s “L,M,N” sequence. Copying out letters and syllables, Lucretius proposed, helped students understand how both letters and elements could be combined into varying forms. In this and many other historical cases, the substance of ancient thought was virtually embedded in its physical forms.

Frampton joined the MIT faculty in 2012, and has since gained further recognition for her work, including the prestigious Rome Prize, for study at the American Academy in Rome during the 2013-14 academic year. She also received a Loeb Classical Library Foundation fellowship and the Margo Tytus fellowship from the University of Cincinnati in 2013. Additionally, Frampton helped found the Mellon Society of Fellows in Critical Bibliography, housed at the Rare Book School of the University of Virginia, where she has been a senior fellow.

Frampton has also thrown herself into her teaching at MIT, serving as co-chair of the Program in Ancient and Medieval Studies with historian Eric Goldberg. While an introductory Latin class was already offered before she arrived, Frampton introduced an ancient Greek course, and has started teaching advanced classes in both languages, as well as offering courses in classical literatures, translation, media history, and the introductory course to ancient and medieval studies.

“Students [at MIT] are extremely self-directed and motivated by the purest of intellectual interests, which is their own enrichment,” Frampton says.

Frampton has also received support from MIT’s Alumni Class Funds for a project, “Exploring the History and the Future of the Book at MIT,” that aims to develop new learning experiences and resources for students. Part of the program could add new materials and resources that complement MIT’s noted course 21H.343 (Making Books), in which students make books using Renaissance-era methods. Frampton hopes to extend such projects to ancient technologies, so that students might, as a final project, construct, for instance, papyrus scrolls.

It may have taken Ovid’s imagination to think of books as having inner lives, but 2,000 years later, in an MIT classroom, ancient book-making itself may come to life.