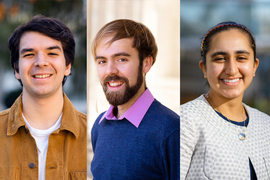 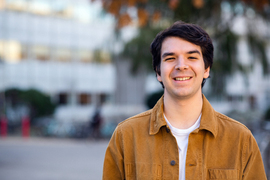 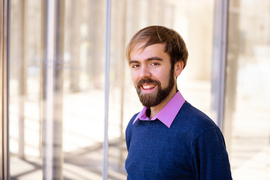 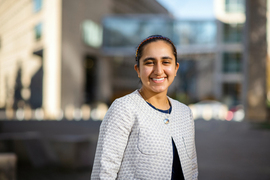 Jack Cook, Matthew Kearney, and Jupneet Singh have been selected for the 2023 cohort of the prestigious Rhodes Scholarship program. They will begin fully funded postgraduate studies at Oxford University in the U.K. next fall. Each year, Rhodes awards 32 scholarships to U.S. citizens plus additional scholarships for citizens from non-U.S. constituencies.

“Our students have worked incredibly hard throughout this process,” says Professor Tamar Schapiro, who co-chairs the committee along with Professor Will Broadhead. “They have been challenged to think deeply about what they want to do and about who they want to be. They have learned to communicate their values and goals in powerful ways. And they have developed confidence presenting themselves to others. We are thrilled that so many of them were recognized this year, as finalists and as winners.”

Jack Cook is a MEng student from New York City who recently graduated with a major in computer science and a minor in brain and cognitive sciences. At Oxford, he plans to pursue an MSc in the social science of the internet and an MSc in evidence-based social intervention and policy evaluation. In the future, he plans to apply his technical skills toward solving problems involving misinformation.

As an undergraduate at MIT, Cook was lead author on “There’s Always a Bigger Fish,” a research paper from Mengjia Yan’s lab that demonstrates how machine learning can be weaponized to extract sensitive information from applications such as a web browser. His work on this project won him MIT’s 2022 Robert M. Fano UROP Award. For his master’s thesis, in partnership with Lahey Hospital, Jack is building a digital cognitive assessment for diagnosing patients with neurodegenerative diseases.

Cook also leads natural language processing initiatives at The New York Times R&D, where he built a system that answers questions from readers about breaking news in real time. As a high school student, he was on the founding team of Mixer, a startup focusing on low-latency live-streaming that was acquired by Microsoft in 2016.

Cook was also director of HackMIT, MIT’s premier annual 1,000-person hackathon, for two years. For HackMIT’s first virtual event in September 2020, he led the development of a 3D virtual platform on which hackers could “walk around” and interact with each other while participating remotely.

Matt Kearney from Austin, Texas, is a senior majoring in both electrical engineering and computer science and philosophy. At Oxford, he will pursue an MSc in research in statistics. His goal is to redesign AI technologies and practices to both address their harms and reimagine them as tools for solutions to pressing societal issues such as climate change and economic inequality.

At MIT, Kearney has researched theoretical quantum computing with the Quanta Research Group, computer vision for 3D scene understanding with the Computer Science and Artificial Intelligence Laboratory (CSAIL), probabilistic climate downscaling with the Human Systems Lab, and explainability methods for natural language models with CSAIL. He also interned with Argo AI, an autonomous vehicle company, and Google X, the moonshot factory of Google.

Kearney ran on the MIT Cross Country and Track and Field teams and served as a captain for three years. He also co-founded a project in 2020 with the goal of focusing individual efforts on the most effective solutions to climate change. He and his co-founder were awarded the PKG Fellowship and the IDEAS Fellowship to support this work. Additionally, as part of his studies in the humanities, he was selected as an MIT Burchard Scholar.

In his spare time, Kearney loves spontaneously singing, cooking elaborate meals, and absolutely anything in the outdoors.

Jupneet Singh is a senior from Somis, California, majoring in chemistry with a flex in biomedical engineering and minoring in history. As a Rhodes Scholar at Oxford, she intends to study for an MSc in evidence-based social intervention and policy evaluation. Following Rhodes, she plans to attend medical school and then complete residency as an active-duty Air Force Captain.

Singh’s career goals include serving as a trauma surgeon in the Air Force, and then entering the United States Public Health Commissioned Corps to advocate for the representation of minorities and culturally adaptive practices in health care. She currently holds leadership positions in Air Force ROTC, MIT Mock Trial, and Project Sunshine MIT, and is also involved with the PKG Center. She conducts research in the Shalek Lab studying fatty liver disease, and she has also worked in the Nolan Lab on natural products research.

This past summer, Singh worked in de-addiction centers in India and had an abstract accepted to the American College of Surgeons Southern California Conference. She has worked in California at the Ventura County Family Justice Center and Ventura County Medical Center Trauma Center and published a paper as first author in The American Surgeon. Singh founded a program, Pathways to Promise, to support the health of children in Ventura affected by domestic violence, and has received four fellowships to support it.

Matthew Kearney , John "Jack” B. Cook ’22, and Jupneet K. Singh  are amongst the 2023 Rhodes Scholars, reports Michael T. Nietzel for Forbes. This year’s Rhodes Scholars "will go to Oxford University in England next October to pursue graduate degrees across the breadth of the social sciences, humanities, and biological and physical sciences,” says Elliot Gerson, American Secretary of the Rhodes Trust. “They inspire us already with their accomplishments, but even more by their values-based leadership and selfless ambitions to improve their communities and the world.”

In the history lab, delving into the South Asian experience at MIT